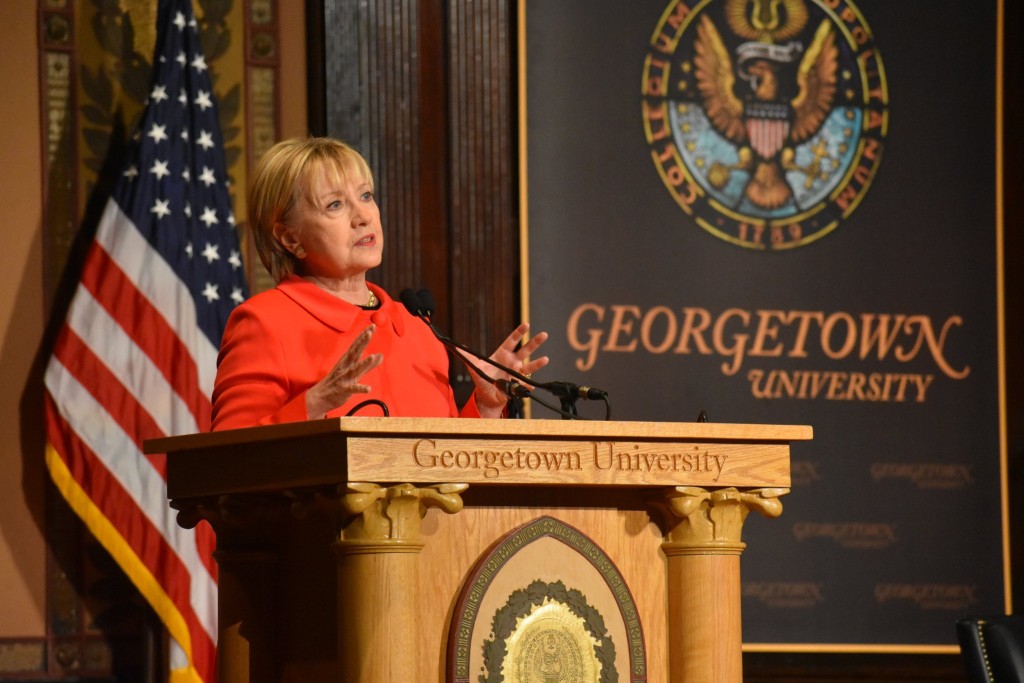 Former Secretary of State Hillary Clinton is set to speak in Gaston Hall on Feb. 5 to present the annual Hillary Rodham Clinton Awards for Advancing Women in Peace and Security to Nadia Murad, a former captive of the Islamic State group, and Wai Wai Nu, a Rohingya activist.

Clinton will also present a second award, the Global Trailblazer Award, to BBC international correspondent Lyse Doucet for her coverage of the impacts of war in Africa and the Middle East on women and children.

The HRC awards recognize exceptional individuals who advance women’s role in peace-making efforts. The award is sponsored by the Georgetown Institute for Women, Peace and Security in the name of Clinton, the honorary founding chair of GIWPS.

Murad, the first Goodwill ambassador for the dignity of survivors of human trafficking for the United Nations, was one of thousands of Yazidi women who were captured and enslaved by the Islamic State group in Iraq.

After suffering significant sexual abuse in IS captivity, Murad has since campaigned for recognition of the plight of Yazidis, a Kurdish religious minority group, ultimately bringing the problem of human trafficking to the U.N. Security Council. Murad was nominated for the Nobel Peace Prize in 2016.

Nu, a member of the persecuted Rohingya people, was one of many political prisoners in Myanmar. She was freed in 2012 and later pursued a law degree and founded two nongovernmental organizations aimed at empowering Myanmar’s youth: Women’s Peace Network-Arakan and Justice for Women. The NGOs seek to provide legal education to Myanmar’s youth and to teach women how to prevent and combat domestic abuse and sexual abuse. In 2015, Nu launched an online anti-hate speech campaign with the hashtag #MyFriend.

Clinton launched GIWPS in 2011 in partnership with Georgetown University President John J. DeGioia as a part of former President Barack Obama’s U.S. National Action Plan on Women, Peace and Security. GIWPS promotes global stability and women’s rights through the engagement of women in conflict prevention and issues such as climate change. The institute is currently run by former U.S. Ambassador-at-Large for Global Women’s Issues Melanne Verveer.