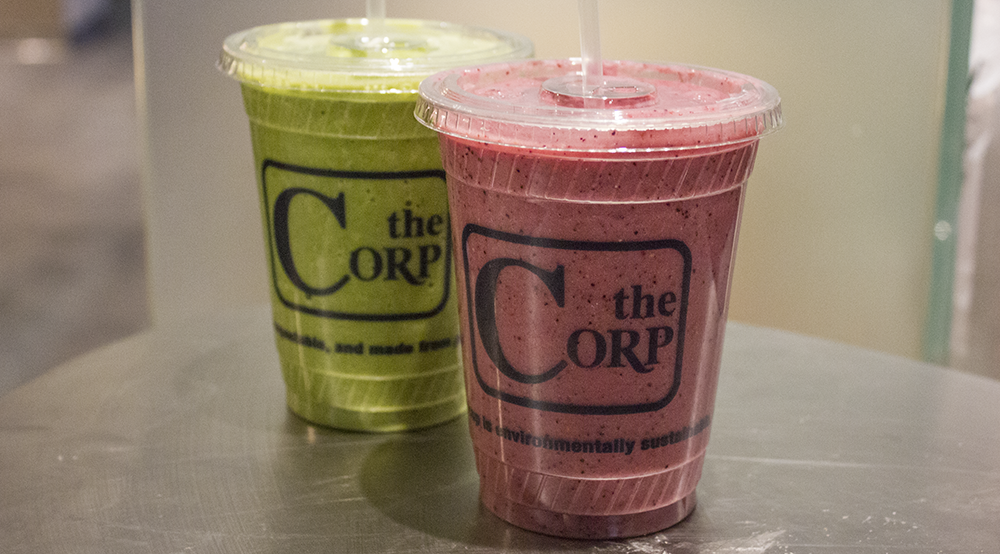 The smoothie selection includes six signature flavors, including a classic protein shake called the Rock to a strawberry-banana shake called the Eloise, which has been the most popular choice. The Rock costs $6, three smoothies including the Eloise cost $6.50 and the two other drinks cost $7.

According to outgoing Director of The Hilltoss Dana Mitchell (MSB ’15), revenue has already increased since the addition of smoothies to the menu.

“Our profit margins are in line with industry averages,” Mitchell said. “We’ve been very happy with the continued success of our salad operation, and since the introduction of smoothies, we’ve seen our revenue increase about 16 percent.”

The upper management team created the smoothie recipes based on trial and error.

“Myself and the upper management team had a couple days of testing where we would go to grocery stores, grab all of our ingredients, then just play around with our blenders and try a variety of flavors,” Mitchell said.

The smoothies, which are different from premade Mr. Smoothie brand smoothies served in The Corp’s coffee brewing storefronts, Uncommon Grounds, More Uncommon Grounds and Midnight Mug, are handmade in The Hilltoss with fresh ingredients.

The Ipanema smoothie, for example, is made with coconut milk, coconut water, Greek yogurt, coconut meat, pineapple and agave, while the Ashram smoothie is made with orange juice, pineapples, strawberries, wheatgrass, goji powder, spirulina and Emergen-C.

With smoothies added to the menu, The Hilltoss’ management has started planning its next project — introducing acai bowls to the menu.

The management plans to include a frozen yogurt-style toppings bar so that students can choose from a variety of toppings for the acai bowls. The directors hope to begin serving acai bowls in the next few weeks to encourage students to go to The Hilltoss for breakfast.

“We’re hoping to really capture the breakfast crowd with our pastries, our coffee and the acai bowls,” Mitchell said.

In addition to adding new items to the menu, the restaurant’s management is considering other options to increase its operations, including extending its hours of operation to include weekends. Currently, the Hilltoss is only open Monday through Friday from 11 a.m. to 8 p.m.

Incoming Director of The Hilltoss Cedric Lewis (MSB ’16) said that extending the hours of operation is a long-term goal for the restaurant.

“Currently, our staff is not big enough for us to be open on weekends,” Lewis said. “In the coming semesters, we are looking to extend our hours as we grow with our staff, whether that be for weekday hours, for breakfast or later evening hours, or whether that’s becoming open on Saturday and Sunday. It’s something that’s not set in stone yet, but it’s a goal for the future.”

The management is seeking student feedback as it continues to make plans for the future.

“If anyone comes into the store and has an idea to add, something about one of our smoothies or another recipe, we have a suggestion box,” Mitchell said. “We really love when customers write down what they think, and then we implement it. We’ve actually implemented a ton of those. One customer wanted us to sell soup. So then, in a few weeks, we offered soup.”

Mitchell said that he hopes The Hilltoss will continue to provide for the specific needs of students.

“The model of The Corp is students serving students,” Lewis said. “Whenever we have a chance to further adapt to what students want, we want to know what it is, and we want to make it happen.”

Magdalene Economou (COL ’17) said that the prospect of The Hilltoss opening on weekends is an attractive one.

“I go to [The] Hilltoss at least twice a week and try different salads and drinks. Everything is so yummy,” Economou said. “I just wish they were open on weekends because [O’Donovan Hall] doesn’t have very good weekend options.”

However, some students said that several items on the menu, including the smoothies, are slightly overpriced.

“They have great salads and provide a good alternative to food and snacks on campus, but it’s a tad overpriced,” James Abate (SFS ’17) said.

“My smoothie was totally [delicious]. It tasted very healthy,” Cassidy Sachs (COL ’17) said. “I got [the Ashram]. It was pretty satisfying, but I’ll probably never pay seven dollars for one again.”