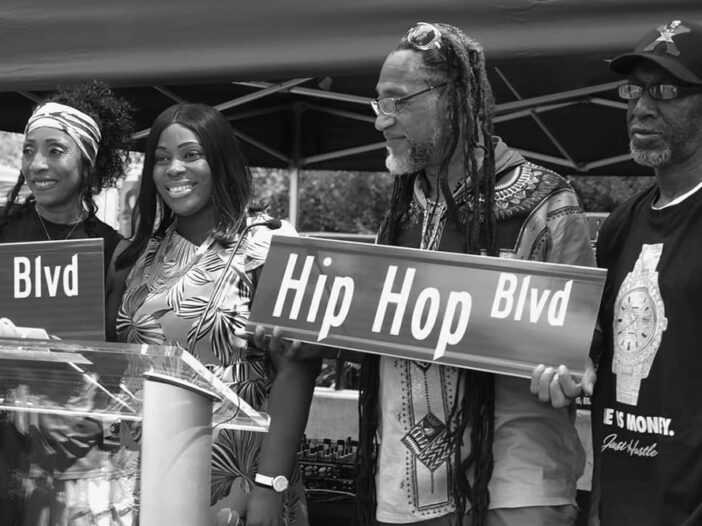 Hip-hop was a niche genre only a few decades ago, but today hip-hop is the most popular form of music in the country and one of the most popular worldwide. By 2018, Drake, arguably the most popular rapper of all time, had already surpassed icons like Elvis Presley and Michael Jackson to become the best-selling solo recording artist of all time.

Hip-hop became a global phenomenon by continually reinventing itself to reflect the shifting cultural landscape, while preserving its essence as a means of self-expression and empowerment. The genre’s original purpose was to serve as a platform for oppressed groups, especially Black Americans, according to radio host, hip-hop journalist and professor at San Francisco State University David “Davey D” Cook.

“Hip-hop speaks to the cultural needs and desires of particular communities who have often been marginalized,” Cook said in an interview with The Hoya. “It was really a cultural response to certain political, social, economic challenges that were facing a group of people who were being made invisible and abandoned by New York City’s government.”

The musical outlet was always a means to amplify the voices of Black communities without power, according to hip-hop historian and professor Murray Forman of Northeastern University.

“It’s a voice of resistance, of political struggle,” Forman said in an interview with The Hoya. “I want to really reinforce the Black experience. The marginal or subordinate cultural groups that turn to hip-hop say, ‘This is the way we can amplify ourselves and give ourselves a presence in our world and in a society that continually represses us.’ Hip-hop has become that amplifier.”

Hip-hop’s origin story begins in the Bronx in 1973, when four elements — deejaying, emceeing, breakdancing, and street art — converged among Black youth looking for a way to express themselves, according to Forman. The culture formed when these artists began attending the same parties, especially the ones hosted by DJ Kool Herc, whose Back to School Jam at a neighborhood recreation center is cited as the birthplace of hip-hop.

The Sugar Hill Gang is credited with bringing the genre to a wider audience. Their 1979 release “Rapper’s Delight” was transformative because it commercialized hip-hop and attracted new listeners outside the Bronx. The song became the genre’s first track to ever chart on the Billboard Hot 100, reaching number 36 in the country.

Grandmaster Flash, another founding father of hip-hop, is best known for his 1982 track “The Message” which combined a groundbreaking beat with social commentary to solidify hip-hop as a medium for political thought, according to Forman.

Hip-hop initially thrived because new artists could get started even if they lacked the financial resources that artists in other genres usually had at the time, according to Cook.

“It was open source, meaning I didn’t have to go to school and spend money getting expensive instruments,” Cook said. “It was something where I could jump in and shine based upon my willingness to work and be creative.”

As hip-hop culture spread from the Bronx and was emulated by Black youth across the United States, this accessibility lended itself to the emergence of new styles, from the breakdancing groups in Los Angeles to the funk-focused sounds of Washington, D.C.

“Every region has its own flavor,” Cook said. “People in other parts of the country facing similar economic and political challenges were also expressing themselves culturally… But these were separate scenes that had nothing to do with New York. These were just young Black kids being overlooked who said, ‘I’m going to do something that makes sense for me.’”

Regional distinctions were also a source of contention and created some of the famous East Coast/West Coast rap rivalries central to hip-hop culture, according to Forman. Most notable were the disses between Tupac Shakur from Los Angeles and The Notorious B.I.G. from New York.

With the combination of political resistance and creative elements that led to hip-hop as we know it today, hip-hop is clearly an entire culture of its own, according to Forman.

“The crucial part is hip-hop as a culture,” Forman said. “In terms of the culture in the 1970s and early 1980s, what was going on politically in the cities and going on culturally in terms of arts and creativity, going on in terms of various other kinds of sensibility. So there’s a fullness to it. I think that that makes it kind of unique and distinct.”