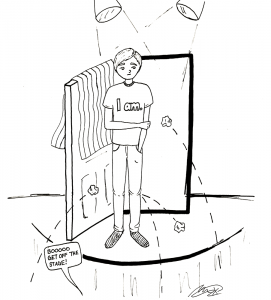 Last Friday, hundreds of students donned their orange “I am” T-shirts for Coming Out Day in a celebration of gender and sexual identity. With Coming Out Day and a number of other events sponsored by GUPride and the LGBTQ Resource Center, OUTober serves to recognize both the triumphs and continued struggles of Georgetown’s LGBTQ community.

Largely because of Georgetown’s Catholic identity, the university has historically been at odds with the LGBTQ community. Although Georgetown has made incredible strides to make our campus a safe and accepting space for all students, there are still a number of reasons that LGBTQ students might not take part in the very visible celebration of Coming Out Day. The ability to be “out and proud” is often tied to intersecting identities of race and class; for some, presentation is not a question of self-acceptance but of survival.

GUPride, the LGBTQ Resource Center and the administration should take further steps to ensure that no one will feel that they cannot afford to publicly disclose their identity on campus.

Of the 15 events hosted in October and November, based on the descriptions found on the LGBTQ Resource Center’s calendar, none of them explicitly address ways to combat Georgetown’s lingering culture of heteronormativity. Such an event, aimed at the broader community of students and administrators, must target what individuals can do to promote a culture of inclusivity.

On the administrative side, the new diversity requirement presents an opportunity to incorporate issues of gender and sexual identity.. Healthy dialogues must include all of Georgetown, not only those already involved with the LGBTQ inclusivity movement. Take Love Saxa, a student group housed in Campus Ministry, that aims to promote sexual integrity at Georgetown through educational programming focused on traditional marriage and family. Socially conservative groups like Love Saxa certainly have the right to free speech at Georgetown along with any other organization on campus. However, when Love Saxa calls attention to “the harmful effects of a distorted view of human sexuality and the human person,” as described on the group’s Facebook page, it takes a step neither toward compromise nor healthy dialogue, and instead alienates the LGBTQ population on campus.

Healthy dialogues on identity, diversity and sexuality that incorporate faith traditions can and should be encouraged. However, it is undeniable that views targeting students of certain identities can make Hoyas feel isolated in a place where they are supposed to feel at home. As we continue to celebrate OUTober and the importance of accepting all identities, the Georgetown community would do well to recognize how far we still have to go. LGBTQ students should not feel as though they have to hide their identities at Georgetown, a campus that boasts inclusivity in theory but not always in practice.