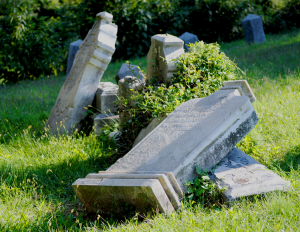 Holy Rood Cemetery, which was one of the nation’s largest burial places for enslaved black people, is undergoing extensive renovations to restore its historic grounds.

Georgetown University and Holy Trinity Catholic Church have partnered to oversee the restorations at Holy Rood announced in November 2018. The first stage of initial renovations is set to be completed in early 2020 with more work to come later in the year.

Holy Rood, located on Wisconsin Avenue, was established in 1832 by Holy Trinity Catholic Church. The people buried at the 186-year-old cemetery include up to 1,000 freed and enslaved black people, Revolutionary War veterans, priests and members of the Georgetown community.

Georgetown has managed the maintenance of Holy Rood since 1942. The university has drawn criticism from neighbors, students and other community members for its management of Holy Rood. The cemetery has fallen into disrepair since at least 2009, marred by vandalism, litter and decay, according to The Georgetown Metropolitan.

In 2018, Georgetown and Holy Trinity announced extensive plans to restore the cemetery, including plans for a 645-niche columbarium, a building used to display funeral urns, and the establishment of a Perpetual Care Endowment to fund future maintenance projects.

Construction on a new columbarium is already complete. Sales of niches for funeral urns in the columbarium will help sustain maintenance going forward, according to university spokesperson Ruth McBain.

“A portion of the proceeds from columbarium niche sales helps fund a Perpetual Care Endowment for the cemetery,” McBain wrote in an email to The Hoya.

“All of these investments, plus, income from the Perpetual Care Endowment that has been established, will insure that the work now underway at Holy Rood won’t be a ‘one-time fix,’” Bateman wrote in an email to The Hoya.

The university’s faltering maintenance of the cemetery has been met with reproval for decades. In 1984, then University President Timothy Healy, S.J., proposed that Georgetown remove the graves and develop the property for different purposes in the future. Healy faced accusations of disrespecting the dead and dropped the idea, according to The Washington Post.

The university has made consistent efforts, however, to improve Holy Rood, according to McBain.

“In 2002, the University rebuilt the stone retaining wall. In 2010, Georgetown and Holy Trinity Church began a joint effort to restore and improve the cemetery grounds,” McBain wrote. “Since the work began, Georgetown has erected a gate and plaque, and the Holy Trinity Church’s work includes the installation of ornamental iron fencing and enhancing the entrance hardscape and landscaping.”

Although Georgetown and Holy Trinity could have done more to maintain the cemetery, both institutions have played a critical role in its upkeep since its founding, according to Bateman.

“Holy Trinity’s funds for maintaining the cemetery became scarce, especially during the hardship of the Depression. Fortunately, Georgetown University, which still held title to the cemetery, stepped in to provide basic maintenance,” Bateman wrote. “Both Holy Trinity and the University could have done a better job maintaining the Holy Rood during past times, but the partnership between the two institutions actually saved the cemetery from further decay.”

The restoration’s success is evidence that, despite Holy Rood’s complicated history, Holy Trinity and Georgetown are working in the cemetery’s best interests, according to Bateman.

“The fruits of the long-standing partnership between Holy Trinity Catholic Church and Georgetown University are already evident at Holy Rood Cemetery,” Bateman wrote. “Not only the improvements to the physical environment that are beginning to emerge, but reconnecting current and future parishioners and members of the University community with this beautiful and sacred space.”

The renovations are a welcome sight after years of disrepair, according to Carlton Fletcher, who has been a Glover Park resident for over 45 years.

“I was delighted to hear of Georgetown University and Holy Trinity’s project, and I look forward to seeing it come to fruition,” Fletcher wrote in an email to The Hoya. “I think that I am like many others who have passed Holy Rood over the years and wondered why it appeared to be in such a sorry state.”