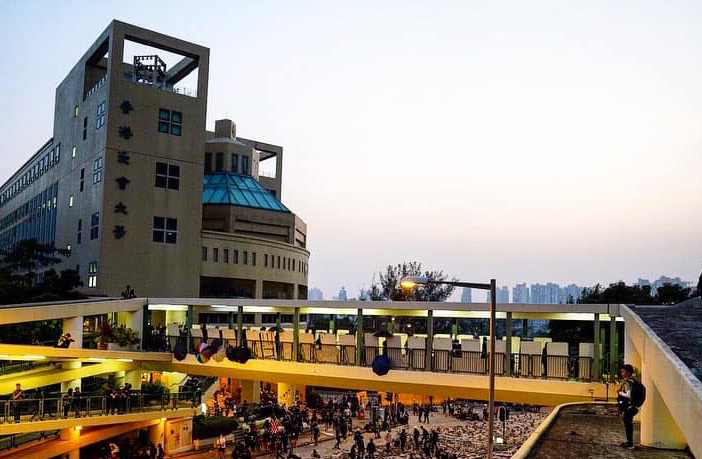 Fifteen Georgetown students studying abroad in Hong Kong this semester have been told to leave the city after announcements Nov. 13 that the programs would end early because of ongoing political unrest in the city.

Protests have rocked Hong Kong for months, but within the last week, the previously isolated demonstrations have reached universities. The Chinese University announced the shortening of its term and cancellation of all classes, effective immediately, and Syracuse University emailed students to share that it is ending its fall program early. Students in Syracuse’s program were given until Nov. 19 at 4 p.m. to check out of their student housing.

The protests escalated rapidly in recent days, according to Livvy Gordon (SFS ’21), who was studying at the Chinese University.

“Once the protests spread to university campuses, the situation changed dramatically,” Gordon wrote in an email to The Hoya. “Within 3 days, the semester abruptly ended and we received notice to leave Hong Kong.”

In February, Hong Kong Chief Executive Carrie Lam introduced legislation that would allow criminal suspects to be extradited from Hong Kong, which ignited massive protests across the city as residents grew concerned that the mainland Chinese government would abuse the bill. Lam has since withdrawn the bill, but demonstrations have continued as protesters call for institutional reforms in Hong Kong, such as addressing police brutality and increasing democratic freedom.

Frustrated by the lack of governmental response, more protesters have begun resorting to more violent forms of protest, including firing arrows at police officers. Officers have been using harsher measures to counter that violence, which have resulted in at least one civilian death in the last week, according to BBC News.

The dramatic escalation of the protests, along with a fire on City University’s campus, drove Syracuse’s decision to cancel its program, according to Darcy Palder (COL ’21). (Full disclosure: Palder formerly served as an Opinion assistant for The Hoya).

“After the death of one of the protesters, the protests have escalated. Our classes were canceled for three days in a row,” Palder wrote in a message to The Hoya. “And then one night, the whole program was sitting together and we found out that one of the buildings in our university was set on fire and we knew we were going home.”

As violence has moved closer to the campuses, students have been instructed to stay indoors as much as possible and food shortages have developed at local cafeterias, known as canteens, according to Gordon; chaos has also led to a fire at the nearby Mass Transit Railway station.

“Police are launching round after round of teargas on campus, the University MTR station is on fire, all entrances to the school are inaccessible by car, and the streets are covered in chairs, traffic cones, umbrellas, and anything else that can serve as a projectile,” Gordon wrote. “Food supply is a serious issue, as canteens now have very limited hours due to low staff and delivery of produce to the university is incredibly challenging.”

City University, where Syracuse’s program is located, has not canceled its classes for the rest of the term, as of Nov. 15. Classes were canceled from Nov. 14 to Nov. 17 and City University’s term ends Nov. 30, according to its website.

City University is working with Syracuse to ensure all directly enrolled international students will be able to complete their coursework remotely, according to an email to students from Mary Fedorko, Syracuse Abroad’s admissions counselor for Hong Kong obtained by The Hoya.

Georgetown will also work with its students to support them in completing their semester’s coursework, according to Dubyak.

“Once students have been safely relocated, the University will work with them to ensure that they are able to complete the remainder of their academic coursework remotely,” Dubyak wrote in an email to The Hoya.

Though academic flexibility will allow students to complete the semester, Syracuse has not provided adequate support for students in other areas. The program has failed to assist students needing to rapidly make flight plans, according to Palder.

University insurance will cover the cost of flight changes and transportation to the airport, but it may not cover flight changes that do not return students directly home or are not on Nov. 19, the “approved departure date,” according to Fedorko’s email.

Students must pay for scheduling their Nov. 19 flights themselves and will only be reimbursed later, according to Palder.

“I really do understand how hard it must be for Syracuse to rearrange everything and that the protests are out of their control, but they really have not been sensitive to the financial burdens this imposes upon the students,” Palder wrote. “We are now up until the AM trying to figure out how to get home because they haven’t provided any guidance.”

Despite the disappointment and surprise of her semester abroad ending suddenly, Gordon expressed her gratitude at experiencing such a significant moment in Hong Kong.

“I feel extremely grateful to have been able to study abroad in Hong Kong during this pivotal time in its history,” Gordon wrote. “I have learned much more about the fight for democracy, political corruption, and global affairs by being there in the midst of this political chaos than I could have learned in any classroom.”

While living in Hong Kong over the past few months provided an invaluable opportunity, Palder acknowledged her privilege as a foreign student caught in the midst of localized political conflict.

“I can leave when things get hard, but the protesters and the citizens of Hong Kong cannot,” Palder wrote. “The protests have been an inconvenience for me, but they’re determining people’s futures.”