As the weather gets warmer, students flock to Healy Lawn to enjoy a sunny afternoon. They nap on the grass, throw a football around and congregate around a laptop with music blasting. But some students draw attention to themselves by taking part in a less traditional spring activity: People lounge on the grass smoking hookah as the fragrant scent of flavored tobacco wafts through the air.

A hookah, otherwise known as a water pipe or narghile, is used to smoke flavored tobacco, called shisha. As someone inhales through a wooden mouthpiece, the smoke passes through the water within a decorated vase. While the device’s history traces back to the Middle East, its presence at Georgetown seems to have increased over the past years as more students buy their own hookahs, looking for another way to enjoy a beautiful day outside or a relaxing evening indoors.

There are many reasons as to why one would partake in this growing trend. Many students find smoking a water pipe to be a fun, relaxing and legal way to get a “buzz” while hanging out with friends, especially during those times when people aren’t feeling particularly energetic.

“I think more people are smoking hookah,” said Jay Factor (COL ’14). “It’s fun and it’s a social thing. People see other people doing it on the lawn and they decide to experience it themselves.”

While the popularity of hookah smoking slowly spreads across campus, there are students, like AnaCenaj (COL ’12), who have tried it, but who aren’t particularly big fans of the activity.

“I suppose I’m not much of a risk taker,” said Cenaj, who has only smoked hookah twice in her life out of curiosity. “The negative media attention of smoking has turned me off to the whole concept … I imagine [the health risks are] similar to smoking a cigarette.”

Still, she doesn’t believe that the well-known detriments of inhaling smoke have turned other students away from water pipes.

“They enjoy the relaxation that comes with smoking,” she said, “[and] I imagine some smoke to fit in.”

Hookah appears to be a small but growing trend on campus, as one can often spot students smoking out on Healy Lawn. Many of these students were introduced to the practice by their friends who already took part in this cultural phenomenon. In particular, many international students exposed their American friends to the experience, which is more common in other countries, especially in the Middle East.

Hao Shen (SFS ’13), who smoked hookah during the summer with a friend, rarely smokes during the regular school year.

“While I don’t think it’s a huge trend with the whole campus, it’s definitely trendy among international students, mainly students from the Middle East,” Shen said.

As the number of hookah smokers on campus slowly rises, this practice is growing even more steadily in the Georgetown neighborhood.

Wael Mahmoud Dib, a native of Lebanon and the manager of Georgetown’s Zenobia Lounge, a well-known hookah lounge in the neighborhood, has seen the business grow over the years with increased popularity with students.

“Many people who are 20 to 25-years-old come, so yes,” Dib said, regarding the question of whether or not students come to Zenobia purely for the shisha. “You can’t smoke if you’re under 18, so if someone looks particularly young, we will always check their ID.”

What he did notice among college-age smokers was that usually four or five people would come together and order food, while only one or two of them will smoke hookah.

“They usually come on Thursdays, Fridays, Saturdays, Sundays too, but they leave early on Sundays,” he said. “But we’re busy every night after 7 p.m. and we get customers of all sorts — embassy people, Middle Eastern people, students, people working nearby.”

Dib believes that this is the most popular he’s seen hookah smoking in the three years Zenobia has been in business.

Although there is no way for him to know if his clients are from Georgetown or not, Dib estimates that college students make up a large part of his business.

“60 percent of my customers are older than college age, while 40% are college students. Probably 80 percent of the college-age hookah smokers are Arab or Mediterranean.”

Dib’s observations agree with most interviewees’ assumptions that many Georgetown students smoke hookah occasionally for recreational purposes, but the students who habitually smoke it tend to be of Arabic or Mediterranean descent. This is partially because hookah smoking is a cultural tradition and prevalent in the Middle East, as well as in parts of the Mediterranean and South Asia.

This has been the experience of Alexandra Dudziuk (SFS ’12), who started smoking hookah out of curiosity because her Lebanese roommate introduced her to it.

“For my roommate and her friends, it’s more of a cultural thing,” Dudziuk said. “Most of them are from the Middle East, so smoking hookah is a greater part of their culture, given Islam’s ban of alcohol consumption … but I do think that it has become trendy.”

Whether Georgetown is a hookah-friendly campus or not, some students believe that hookah smoking has become more prevalent on campus. But for many students who have not been exposed to the practice, either because they are not Middle Eastern or Mediterranean or aren’t close friends with those who are, hookah smoking remains an occasional activity to be enjoyed on exceptionally sunny days on Healy Lawn as the semester draws to a close. 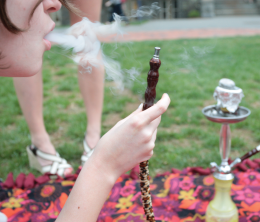