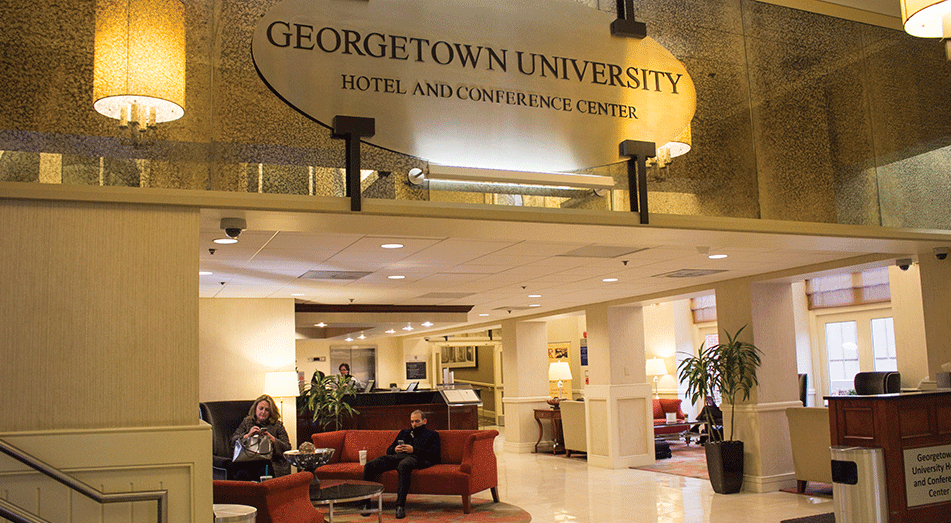 Georgetown has committed to directly fund 15 students with uncertain housing conditions to stay in the Georgetown University Hotel and Conference Center during winter break.

The accommodations will be funded by the Offices of the President, Provost and Student Affairs. This marks the third consecutive year that winter housing has been provided for students in need, and the first year in which the administration has pledged to cover all expenses.

The project is the culmination of a two-year partnership between the Georgetown Scholarship Program and various student groups, including the Georgetown University Student Association. In coming weeks, GUSA and GSP will extend an invitation for interested students in need to apply confidentially for accommodation.

GSP Director Melissa “Missy” Foy (COL ’03), who will be reviewing requests alongside an ad hoc committee, said she expects approximately 15 students to be housed, an increase from last year’s 10 students.

Georgetown first began offering winter accommodation for students in 2014. Last year, Foy used funds donated to GSP from student groups and the university to rent a house for 10 students in the Woodley Park neighborhood of Washington, D.C, through Airbnb.

Last year, GSP received donations from Students of Georgetown, Inc., which contributed $4,500, while GUSA and the Georgetown University Alumni Student Federal Credit Union donated $500 each. The Provost’s Office donated $2,000, while the President’s Office and Alumni Association each provided $1,000.

GUSA President Enushe Khan (MSB ’17) said even though the support of student groups last year was impressive, the administration is ultimately responsible for meeting the needs of all students.
“We are of the firm belief that when the university accepts a student, it is on the university to ensure that the student is fully accommodated,” Khan said.

Vice President for Student Affairs Todd Olson said a collaborative effort is taking place to ensure the needs for all students are met over winter break.

“I am grateful to student leaders in GUSA and GSP, and professional colleagues in GSP and Residential Living, who have worked together to identify needs and explore options,” Olson wrote in an email to The Hoya. “This year, several offices are partnering to assure that students with genuine needs have a place to stay in the hotel on campus during the break — numbers are still being finalized.”

After Khan and GUSA Vice President Chris Fisk (COL ’17) assumed office in April, the pair began advocating for the university to fund the winter housing initiative. GUSA, Olson and Executive Director of Residential Services Patrick Killilee determined that the hotel is the most cost-effective, safe and comfortable option for on-campus housing.

“The ideal would be that students could be in the community together. That’s why our recommendation was the Hotel and Conference Center here on campus, so that all students could be together in a secure building,” Khan said. “[Meals and services] will be covered.”

Foy said candidates’ financial need and ability to access alternative accommodation will be taken into account if more students apply than there are spaces available.

According to Foy, there is also the possibility of increasing the space available for students.

“I hope we will have some wiggle room if the need expands, and we can predict that far enough out,” Foy said. “That’s why it’s important for students to apply as soon as the application is released. I encourage students to apply, particularly those receiving need-based financial aid.”

International students are also eligible for the program.

Foy said the move shows the administration’s push for greater inclusivity across campus.

“The fact that the university’s leadership is throwing its full support behind this endeavor speaks volumes about their continued commitment to students from economically diverse backgrounds,” Foy said. “It’s a really important message to the students who benefit specifically from winter housing, that GSP alone doesn’t just care about you, but that, of course, the university as a whole does too.”

“As a GSP student, this topic has inherently been something I’ve confronted and considered every day at Georgetown, and this year it has been something we’ve made GUSA confront and focus on as well,” Fisk said.

Fisk said he was grateful the administration listened to students and is committed to making Georgetown a more inclusive institution.

“This is a reassuring example of their commitment to supporting students of all backgrounds and, really, of their willingness to recognize the importance of issues students bring to them,” Fisk said.