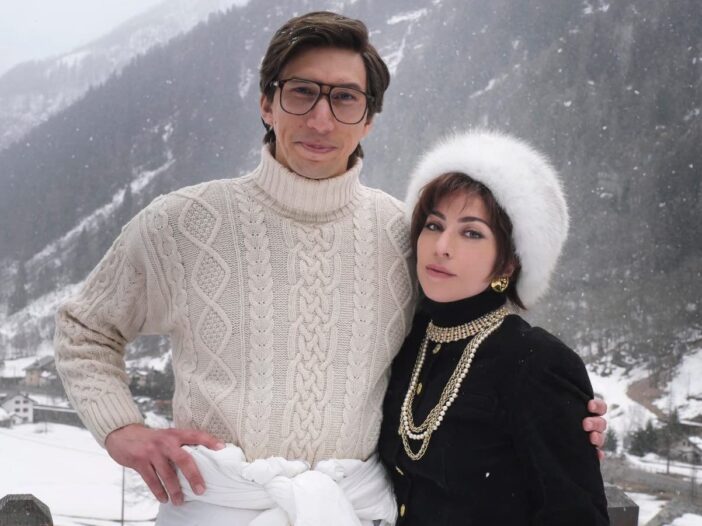 Spinning a sprawling tale of decadence, betrayal and crime, “House of Gucci” attempts to span the gap between satire and true crime, resulting in a tonally confusing, jumbled film. While showing signs of excellence from its cast performances, the movie’s disjointedness ultimately kills it at the finish line.

“House of Gucci,” director Ridley Scott’s second film of 2021, following October’s “The Last Duel,” depicts the inner workings of the family behind the fashion powerhouse, centered around outsider Patrizia Reggiani’s (Lady Gaga) marriage into the family and her orchestration of the murder of her husband, Maurizio Gucci (Adam Driver). A top notch cast portrays the rest of the Gucci clan. Jeremy Irons plays Maurizio’s father Rodolfo, Al Pacino is uncle Aldo, and Jared Leto is unrecognizable as cousin Paolo, rounding out the family members who become embroiled in a struggle for money, power and influence in the Gucci brand.

The movie begins by establishing the relationship between Gaga and Driver’s characters, and the first half of the film maintains an intriguing yet understated satirical grit with its over-the-top characterizations. The focus on the dynamic relationship between Patrizia and Maurizio is the centerpiece of the beginning of the movie, but unfortunately, like the power-hungry Patrizia, the film has a lot of ambition that is left unfulfilled.

The film covers over a decade’s worth of familial turmoil, and this is reflected in its lengthy, soapy runtime of 158 minutes. Scott seemed intent on making an extravagant melodrama to capture the inherent absurdity of a high fashion family feud but was too tied to the biographical details to make it convincingly camp. For example, the numerous chronological jumps needed to get through the entire narrative are disorienting and create an unclear presentation of events.

Toward the second half, the pacing suffers as the film unenthusiastically introduces story beats necessitated by the film’s biographical nature. These essential components cause the ending in particular to feel incredibly rushed and unsophisticated, cramming a messy divorce and a murder plot into the final stretch.

Though its writing is unexceptional, the individual performances shine in “House of Gucci.” Gaga’s portrayal of Patrizia is the movie’s driving force, as she brings a surprisingly menacing intensity to her role. For Gaga to receive similar praise for “House of Gucci” as she did for her Oscar-nominated performance in 2018’s “A Star is Born” would hardly be surprising. Additionally, Driver expertly conveys the subtleties of Maurizio, the initially hesitant heir to the Gucci dynasty who is consistently corrupted by the allure of power and prestige.

Contrasted with Gaga’s triumph, Leto’s performance as Paolo Gucci, the inept and delusional black sheep of the Gucci family, is by far the most disjointed aspect of an already disjointed film. Leto forgoes any comedic subtlety — overacting to the point of complete caricature. He jokes and spouts one-liners in an Italian accent that would feel more at home in a Saturday Night Live sketch than a crime drama.

This absurdity would not be such an issue if Scott employed Paolo as the occasional comic relief in a large ensemble cast. Instead, he becomes a very prominent character halfway through the film, emphasizing the film’s inability to choose between soap opera decadence and dark realism.

Leto’s clown-like Paolo and Driver’s pragmatic and subdued Maurizio do not belong in the same film. Admittedly, Leto’s performance in isolation is humorous and entertaining, and his acting is so ludicrous that it demands attention from viewers. Still, any humor Leto does bring does not justify the character’s distracting presence in the film.

Befitting a movie about a luxury fashion brand tainted by fraud and murderous plots, “House of Gucci” excels aesthetically. The film’s wardrobe, carefully put together by Oscar-winning costume designer Janty Yates, beautifully showcases the opulence of the Gucci family. The film’s scenery is also captivating, with Scott shooting the movie on location throughout Italy. The architecture and greenery of Villa Balbiano, the bright blue of Lake Como and the snow-covered Alpine ski slopes all provide the audience with visually stunning imagery. The dark blue tint familiar to fans of Scott’s work, however, hampers the otherwise impressive cinematography, alluding to the sins that tarnish the Gucci family’s opulence.

“House of Gucci” is more frustrating than bad because it tries to be both a flamboyant drama and a true-to-life crime saga. Choosing either one of these paths would have likely yielded a great piece of entertainment. By choosing both, and failing to strike a balance, the film cannibalizes its viewing experience with conflicting plot goals.

While the superb performances from most of the cast and the striking set design make “House of Gucci” worth a watch, be prepared to be distracted by the clunky and unfocused elements of the film.