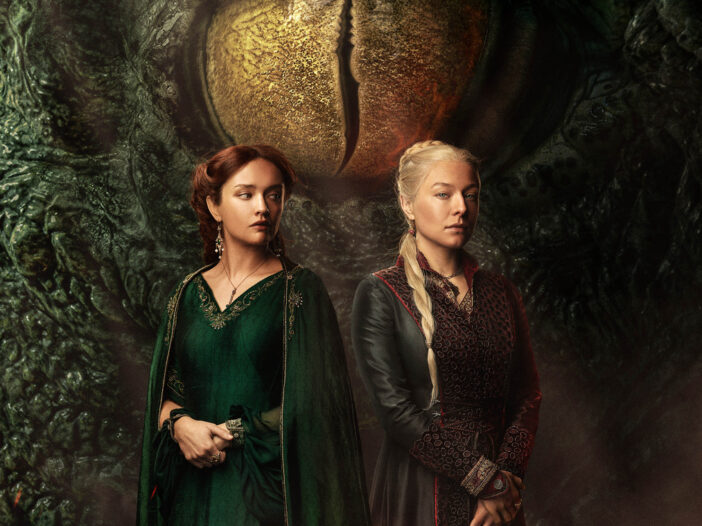 It would be a safe bet to claim that, from the start, the cards were stacked against “House of the Dragon.”

The abject critical failure of the eighth season of “Game of Thrones” left its fanbase jaded and disillusioned with the series. When HBO announced plans to create a prequel show premised on George R.R. Martin’s spinoff book “Fire & Blood,” many were justifiably skeptical. Yet after its first season, “House of the Dragon” has seemingly done the impossible, both redeeming the franchise and reinvigorating a massive fanbase.

Set nearly 200 years prior, this Westeros is in a time of peace and prosperity, ruled by the dragon-riding Targaryen dynasty. Spanning over 20 years, the season illustrates how the family slowly falls apart, split by rival claims over the succession of King Viserys Targaryen (Paddy Considine). Viserys chooses his daughter, Rhaenyra (Milly Alcock/Emma D’Arcy), as his heir, sparking controversy and conflict over who could be the first female ruler of Westeros.

Greater emphasis is put upon a slow revelation and unfolding of conflict and intrigue, whereas “Game of Thrones” opened with instant conflict. The result is a show that, while slower than its predecessor, rewards its viewers with a far more intimate and complex understanding of its characters.

The relationship between Alicent Hightower (Emily Carey/Olivia Cooke) and Rhaenyra is the fuel for the fire, and both dictate many of the show’s struggles with the patriarchy. Both initially begin as naive yet loving and close friends — and end political enemies. Both are political playthings to the patriarchy, to be married off to solve the problems of those in power or their family’s ambitions.

Alicent is married off to a man perhaps three times her age, forced to churn out children for the royal lineage. Rhaenyra, though granted a greater degree of freedom, finds herself conflicted between her duties as a princess and her desire to explore her sexual freedom. This freedom ultimately drives a wedge between Alicent and Rhaenyra, and the two become bitter rivals.

These emotions are not to say that “House of the Dragon” lacks in the visceral, bloody action the original was known for — rather, far from it. For instance, in the third episode, a chaotic and fiery sequence sees Prince Daemon Targaryen (Matt Smith) and the knights of House Velaryon engage in a grimy beach battle against the guerrilla forces of the Crabfeeder (Daniel Scott-Smith), complete with copious gore and disembowelments. In the final episode, an epic chase in a raging storm above the aptly-named Storm’s End sees Prince Aemond Targaryen (Ewan Mitchell) face off Rhaenyra’s son Lucerys Velaryon (Elliot Grihault), and is perhaps the single best dragon action ever witnessed on TV.

The show’s biggest strength undoubtedly lies in the complexity of its characters and the supreme talent of its cast. Each character is stunningly human, an amalgamation of desires, motivations and insecurities. Smith encapsulates Daemon Targaryen, bringing to life a brutal, cunning yet conflicted warrior whose prime redeeming quality is his love for his family, and dominates every scene he appears in. His relationship with his niece Rhaenyra is as much off-putting as it is amorous and interesting.

Milly Alcock’s performance as a young Princess Rhaenyra embodies the rebellious and adventurous flair of a teenage princess, while Emma D’Arcy — after a time-jump before the sixth episode — shows a more mature, compassionate, and refined woman in their portrayal of Rhaenyra as she fights for what she considers her birthright.

Considine’s performance as King Viserys is without a doubt the highlight of the cast, however, expertly portraying a fundamentally good man whose love for his daughter Rhaenyra and family compromises his ability to rule. Considine’s performance makes the season’s eighth episode, “The Lord of the Tides,” a standout, as he makes a last-ditch effort to keep his family together while suffering from the literal rotting away of his own body due to leprosy.

This is not to mention the whole host of other supporting characters that breathe life into the show. Corlys Velaryon (Steve Toussaint) shows us the cost of insatiable ambition, while his wife Rhaenys Velaryon (Eve Best) bears the brunt of patriarchy, while demonstrating immense wisdom and restraint.

Criston Cole (Fabien Frankel) struggles with his honor as a knight of the Kingsguard and ultimately gives in to his resentment. Otto Hightower (Rhys Ifans) is a manipulative yet seemingly loyal politician who may genuinely care for the realm, and Larys Strong (Matthew Needham) embodies a creepier, more sadistic and perhaps magical version of Littlefinger (Aidan Gillen) from “Game of Thrones.”

Most importantly, however, “House of the Dragon” also possesses a familial intimacy not often shown in the original, along with a more focused narrative. Ultimately, the show’s greatest disappointment will be the over one-year wait until the next season.

The Dance has begun: may fire reign.