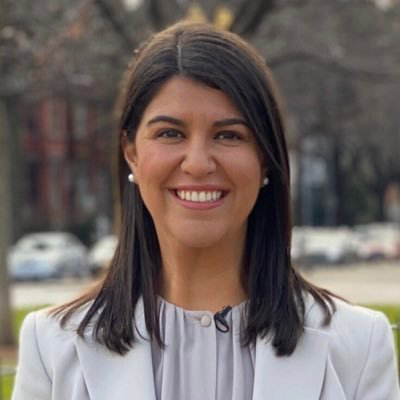 Brooke Pinto (LAW ’17) beat out a crowded field for the Democratic nomination to represent Ward 2 on the Council of the District of Columbia, following a campaign season complicated by the COVID-19 pandemic.

Pinto, a former assistant attorney general to Washington, D.C. Attorney General Karl Racine (D), entered the primary race in February, the last contender to file for the June 2 primary. Runner-ups Patrick Kennedy, a longtime member of Advisory Neighborhood Commission 2A, and Jordan Grossman, a former Obama administration official, both conceded the race after Pinto’s margin of victory widened. Embattled former Councilmember Jack Evans trailed in votes, coming in second to last in his bid to win back the seat he resigned amid an ethics scandal.

Campaigning during the pandemic was a challenge, but the election still generated high voter turnout, according to Pinto.

“The second week of March, we canceled all in-person events, all door knocking and our entire team starting working remotely. And so everything we did from there on out was over the phone, over Zoom and online, so it certainly changed our strategy,” Pinto said in a phone interview with The Hoya. “I’m glad to see that it was the highest turnout in history, despite COVID, which is a real testament to how committed our residents are.”

However, residents and lawmakers voiced concern that the D.C. Board of Elections ran a disorganized election this year, with reports of missing absentee ballots. The 7 p.m. curfew imposed because of citywide protests led to one officer improperly sending voters at a Georgetown polling station home, according to The Washington Post.

The electronic mail-in voting option was simple and effective, according to Jack Meiter (SFS ’23), who voted absentee in the Ward 2 primary.

“My electronic mail-in voting experience was pretty seamless,” Meiter wrote in a message to The Hoya. “I received the ballot by email about a month before the election, and the instructions were very clear and easy to follow. I think it took about 15 minutes to vote total. I would (and likely will) certainly vote this way again; it was very simple.”

The vast majority of Georgetown University students, however, are not registered as voters in Ward 2 and have no sway in choosing who represents them as councilmember. Still, college students have a crucial perspective when it comes to legislating, according to Pinto.

“I am really committed to getting more youth voices aware of our local government and involved in the legislative process because our youth are unencumbered by the status quo and are able to think outside the box for changes they’d like to see implemented in our community,” Pinto said. “Particularly as we work to reform the Metropolitan Police Department and the way that we provide public safety and build our communities up, I think the perspective of our students is going to be uniquely imperative.”

If elected, Pinto would be the first female Ward 2 councilmember as well as the youngest sitting councilmember. She said her election shakes up stereotypes and proves women can succeed in local politics.

“I do think that gives me an added sense of responsibility to ensure that all voices are being heard, and not just heard but actually represented,” Pinto said. “I think women, in particular, are so often dissuaded from getting involved because they think to themselves, ‘Do I have enough experience? Do I know about these issues?’ And as I looked around this crowded field, in January, I thought to myself, humbly, ‘Well, I actually do have more relevant experience for this seat, so why not me? Why not now?’”
Pinto will face the same competitors in a June 16 special election to fill the vacancy left by Evans’ resignation, some of whom have said they will not campaign in the race following the results of the primary. She will face Republican Katherine Venice in the general election Nov. 3.