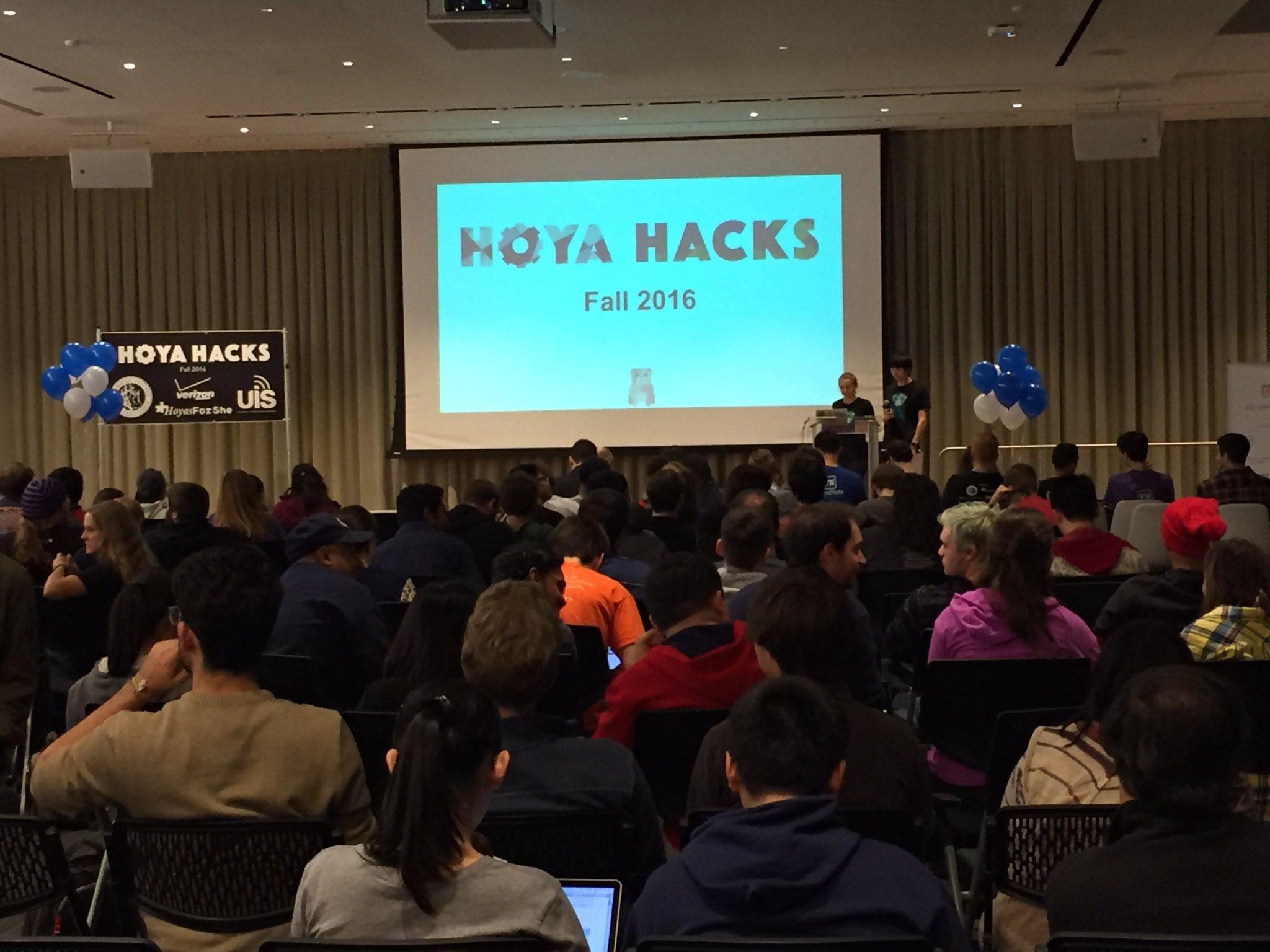 Students from colleges across the country descended upon Georgetown’s campus last weekend to compete in the second annual Hoya Hacks, a competitive 36-hour test of software and hardware skill and determination in pursuit of prizes and honors.

This year’s event attracted more than 300 students from over 130 universities.

Hosted in the Healey Family Student Center by the Hoya Hacks team, the hackathon was “powered” by Dell and Microsoft Windows, according to the event’s website.

The event’s first prize of $1,000 went to a team that created a wind tunnel project during its allotted time. Yatpang Cheung (COL ’17), co-vice-president of Hoya Hacks, described the team’s creation.

“The project was a wind tunnel where you could simulate wind moving through a closed tunnel and seeing how certain obstacles affect the wind moving,” Cheung said.

The goal of the wind tunnel project was to encourage STEM education by making wind tunnels more accessible for everyone.

Beyond first-, second- and third-place prizes, there were also awards given for best hardware, best software and certain sponsored prizes.

One of the sponsored prizes was given for best health-related hack presented by the American College of Cardiology, which pledged to donate a heart transplant to a child in India in the name of the winning team and presented it with an internship opportunity.

Marc Connell (SFS ’17) won awards for “Best Social Innovation Hack” and “Best Political Hack” for his project HomeAway, which is an app designed to help homeless individuals locate helpful resources, while gathering data on homelessness in the process.

“It’s a common misconception that homeless people have no access to information technology,” Connell said. “There’s a need for better data on homelessness.”

Guy Burstein (COL ’17), the other co-president of Hoya Hacks, said that the Georgetown computer science department, which describes itself as a “small” department with a tight-knit academic community, is growing and that the event highlights its achievements.

According to Burstein, the event’s organizers are other Georgetown students, who are often members of the computer science community.

“I think something we want to strive for is higher turnout among Georgetown students, right now it’s like a quarter, but ultimately, this movement of the hackathon is to make Georgetown’s academic environment to be more [computer science] oriented,” Cheung said.

Cheung said that one of the goals was to expand Georgetown students’ experience with diverse aspects of computer science.

“It’s a great way for Georgetown students to team with other students from other schools, since they come from different backgrounds, they go through different coursework that’s offered at other schools that’s not offered here,” Cheung said.

Elly Meng (COL ’19), a participant and winner of the best gender hack, sponsored by HoyasForShe, said the hackathon was a good learning experience.

“Seeing my peers’ brilliant hacks showed me how much I still have to learn and definitely inspired me to keep learning outside of the classroom,” Meng said.

Meng said that the event was well-run and provided an environment conducive to learning and creativity.

Both Meng and Connell said they would participate in another Hoya Hacks hackathon.

“And other hackathons in the meantime,” Meng said.

Corrections: A previous version of this article indicated that over 300 students from more than 130 universities participated in the spring Hoya Hacks competition, and that the fall event’s metrics exceeded those numbers; both claims were made in error. Yatpang Cheung was previously listed as a co-president of Hoya Hacks; he is a co-vice-president of the organization.