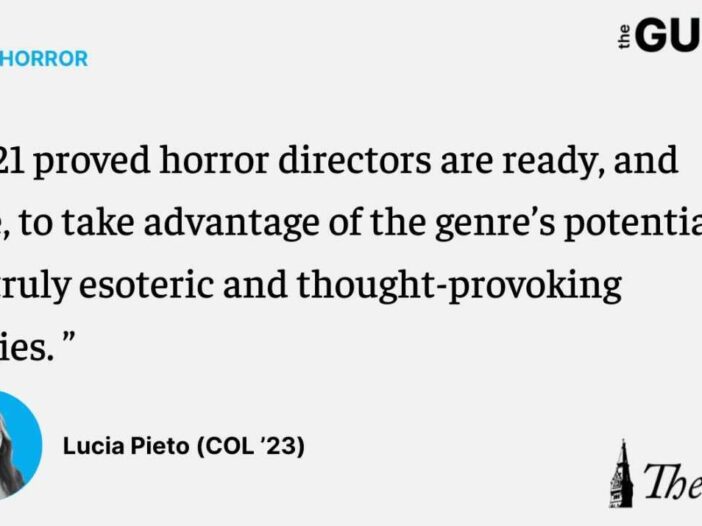 Over the past year, new horror releases pushed the boundaries of their genre, making 2021 an excellent year for the horror genre and its fans.

Throughout the year, I found myself easily finding new horror titles to watch — a refreshing change from the usual scrolling and sifting I’ve had to do in the past to find a good title. Because of the stellar year for the genre, I hope to take a look at some of the top horror films from 2021 that defined the genre and also demonstrated the ability to defy the norm.

The first standout film that comes to mind is James Wan’s “Malignant,” which I would call one of the year’s most bizarre films. The story follows a young woman who begins experiencing strange visions after a severe head trauma. This title felt completely different from Wan’s previous popular film franchises, like “The Conjuring,” “Insidious” and “Saw.”

Wan’s willingness to take risks and go in unexpected, eerie directions with his plot gave audiences a truly outlandish and inspired storyline, while also resuscitating something I had thought to be lost in horror — the ability to not take itself too seriously. “Malignant” successfully combined gory horror with camp and comedy, all the while referencing Italian Giallo films of the 1970s. Despite being a very divisive movie among audiences, “Malignant” was a breath of fresh air in my opinion and proved to be genuinely entertaining for entertainment’s sake.

Valdimar Johannsson’s “Lamb,” might be the only other 2021 horror hit that gave “Malignant” a run for its money. The film follows a couple living in an isolated part of Iceland who raise a half-human, half lamb baby that was birthed from one of the sheep on their farm. With a cast of only four people and one primary setting, “Lamb” still manages to tell a deeply rich and unsettling story about family, death and retribution. “Lamb” is also part of a rise in folk horror that’s been gaining traction in the mainstream horror genre, a trend also exemplified in Ari Aster’s “Midsommar” and Lee Havan Jone’s “The Feast.” Given the breadth and quality of these popular folk horror films, I sincerely hope we continue to see the rise of folk horror as we enter 2022.

Another stand-out title from my year was Nia DaCosta’s “Candyman” sequel. Regardless of any issues I personally had with the film’s technical components and production, “Candyman” (2021) was a necessary update to the original 1992 “Candyman.” Although considered a classic, the original had some glaring flaws: it was a story about racism, gentrification and white saviorism as told through the experiences of white characters. With a majority white cast, white director and white production team, I felt the original “Candyman” needed to be retold in a way that was centered on the voices and experiences of Black characters, which is exactly what the 2021 “Candyman” did. This updated movie set itself apart from 1992’s “Candyman” by offering new critiques of white society and institutions, while also creatively referencing and harnessing the original material.

My final addition to this review is “Titane,” a French body horror film from director Julia Ducournau. Though it took me multiple tries to get through the film from beginning to end due to the sheer intensity of the body horror, Titane’s story is well worth it for those who can handle discomfort. Following the story of Alexia, a serial killer who has a metal plate in her head from a car crash, “Titane” blurs lines between human and machine. The film notably uses body horror in a meaningful way, rather than using gore for gore’s sake. I was also pleased with the movie’s use of a genuinely dislikeable female serial killer, which is a type of character we do not typically see in major horror releases.

Overally, I was very excited about the volume of strong horror movies released in 2021. Many of the movies pushed the boundaries of horror in ways I had not seen in previous years, giving horror fanatics like myself something exciting in the genre that has been static for too long. 2021 proved horror directors are ready, and able, to take advantage of the genre’s potential for truly esoteric and thought-provoking stories. With sequels  of the 1974 “Texas Chainsaw Massacre”and  “Halloween,” as well as a prequel of  “Orphan” slated for 2022, I am excited to see what the genre will bring as we enter another horror-filled year.

Lucia Pieto is a junior in the College. Hoya Horror appears in print and online every other week.