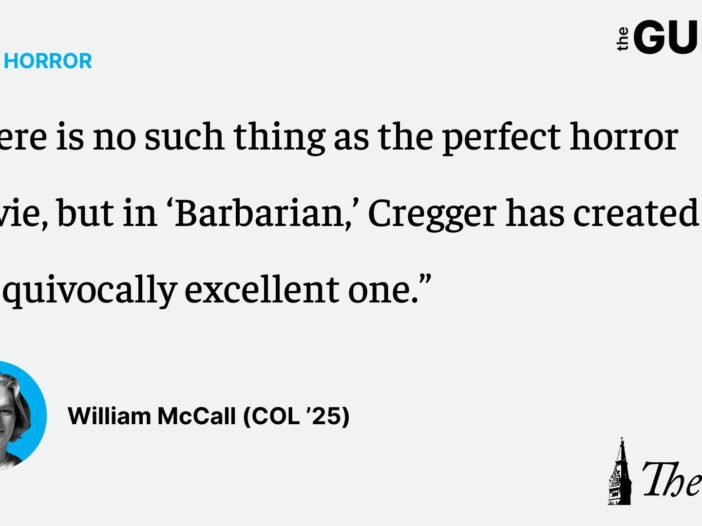 As a genre, horror revolves around the moment when the ordinary turns eldritch — when safety dissolves into danger and when what was once familiar becomes alien.

In John Carpenter’s “Halloween,” a cozy suburban neighborhood is transformed into a serial killer’s slaughter-ground. In Wes Craven’s “A Nightmare on Elm Street,” the security of sleep gives way to, well, nightmare.

“Barbarian,” director Zach Cregger’s latest offering, is no different. Combining themes of sleep and suburban life into one, Cregger channels an Airbnb rental into a house of horrors that spawns 2022’s most chilling creature feature.

Starring Georgina Campbell as Tess, a young professional sojourning in a run-down Detroit neighborhood for a job interview, “Barbarian” begins with a minor inconvenience: Tess discovers that her Airbnb has been mistakenly double booked. The other occupant — Keith, portrayed by Bill Skarsgård from “It” (jarringly without clown makeup) — seems decent enough, offering to let Tess stay the night until they can contact their host in the morning. But he is not without a certain awkwardness that makes for tense viewing.

Indeed the early minutes of “Barbarian” don’t really feel like a horror movie at all, instead like a slow-burn thriller or strangely-rendered romance. The viewer’s fear certainly starts to tingle with Keith’s rambling insistence that Tess join him for a glass of wine but after Tess acquiesces and partakes, our view on Keith softens. It turns out he’s also in town for business, scouting out properties for redevelopment. No danger here — just a mixup turned meet cute.

Yet as Tess returns from her job interview the next morning, she discovers that the neighborhood housing her Airbnb is a dilapidated ruin. A close encounter with a strange man lurking the neighborhood’s streets leads her to seek shelter in the house’s basement, where she discovers a hidden door leading to an expansive, chthonic tunnel system and a dimly lit room containing a mattress, a bucket and a camera.

I won’t ruin the insanity of what unfolds next, but after Tess’s discovery the film kicks itself into high gear. Horror movies have always relied heavily on ambient and dynamic settings (the mutant jungle from “Annihilation” or the iconic Overlook Hotel from “The Shining” spring to mind), but the claustrophobic tunnels in “Barbarian” do enough to stand out from the crowd.

With unknown terrors lurking over every character’s shoulder, composer Anna Drubich’s blood-curdling score sets up a particularly eerie tone; Cregger’s direction transfers us back to the dank boiler rooms, musty basements and creaking attics that terrorized our childhoods. However, this time, the unknown will not only contain a few spiders and storage bins. “Barbarian” means business.

For a movie that starts off so sedately, “Barbarian” accelerates into madcap carnage at breakneck pace. Fear of the unknown really only works when the darkness is eventually illuminated, revealing danger, death and blood — a triumvirate that Barbarian delivers in spades during a disturbing, gory latter half.

Nevertheless, the film is equally adept at knowing when to slow down and flex Cregger’s comedic chops, mostly through the delightfully obnoxious performance of Justin Long’s AJ, a sleazily funny Hollywood type introduced in the film’s second act as the owner of the Airbnb.

AJ is crucial also for the film’s strong thematic component. While Cregger is not as invested in thesis-building as Jordan Peele with “Nope” or Robert Eggers with “The Lighthouse,” “Barbarian” commits itself to a surprisingly earnest examination of sex and the patriarchy. “Men will walk all over you if you let them,” Tess grimly reminds Keith at the start of the film, referencing Tess’s hesitance to open up to Keith at the beginning of the film.

Unfortunately, for much of “Barbarian,” Tess is right. AJ, Keith and other male characters either hesitate to believe Tess’s account of the disturbing truths she uncovers in the Airbnb’s basement or actively exploit Tess for their gain. If the film’s gloomy tunnels set the table for the film’s horrifying main course, then its compelling cross-section of female debasement at the hands of men is an intriguing amuse-bouche, adding flavor to what might otherwise be a fun, twist-filled but topically bland flick.

There is no such thing as the perfect horror movie, but in “Barbarian,” Cregger has created an unequivocally excellent one — an unsettling tour de force that ought to be on the must-see list of every horror fan, die-hard or otherwise.

William McCall is a sophomore in the College. Hoya Horror appears in print and online every other week during the fall semester.