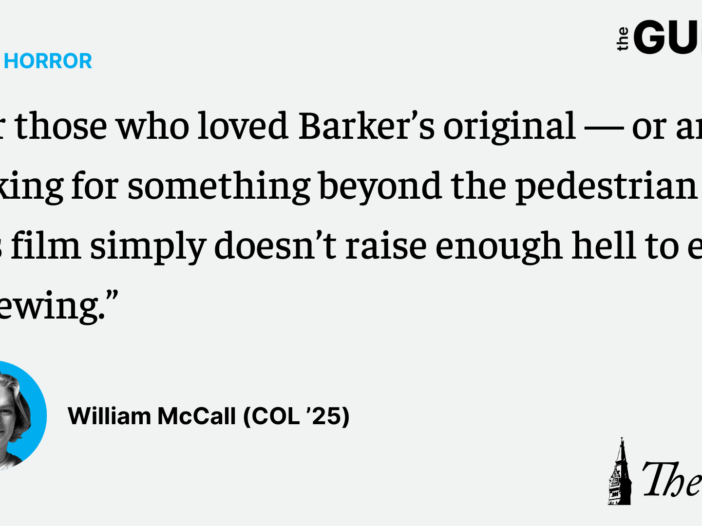 In 1987, British filmmaker Clive Barker directed “Hellraiser” — a torture-porn, fetish-culture-infused response to the slasher boom that produced “Halloween,” “A Nightmare On Elm Street” and “Child’s Play.” While these other films conjured scares through knife-wielding (or finger-knife-wielding) killers, “Hellraiser” broke the mold.

“Hellraiser” introduced horror fans to the Cenobites: Lovecraftian demons from a dimension beyond our understanding summoned via a mysterious puzzle box and intent on exploring the boundaries between pleasure and pain. Fueled by twisted creativity and gore, Barker’s creation was a success, garnering favorable critical reviews and capturing the public’s attention. In fact, its most famous Cenobite, actor Doug Bradley’s Pinhead — named, aptly, after the needles arranged around his cranium — even appeared, rather bizarrely, at the 1992 MTV Music Video Awards.

It’s no surprise, then, that in 2022, Hulu rebooted the cult hit, releasing its own direct-to-streaming “Hellraiser” helmed by “The Night House” writers Ben Collins and Luke Piotrowski. However, while Barker’s original masterpiece was shocking and fresh, Hulu’s remake is the opposite: trite, tired and lacking.

To be fair, the new “Hellraiser” gets off to a solid start, as sinister millionaire Roland Voight (acted with scene-stealing camp by Goran Višnjić of “ER” fame), sacrifices an ill-fated sex worker to the off-screen Cenobites in order to unlock the mysterious capabilities of the aforementioned puzzle box. “The Box,” as the film refers to it, is a hellish Rubik’s Cube that, with a healthy diet of human blood, is happy to grant its user whatever they desire — invariably with some cruel twist.

This is a good introduction, but it’s over all too soon, jump-cutting from Roland to a couple relishing off-camera, censored-for-streaming sex. Meet Riley (Odessa A’zion) and Trevor (Drew Starkey), two addicts staying with Riley’s brother, Matt (Brandon Flynn). This living arrangement, while predictably tense, does introduce us to a few other pieces of Cenobite fodder: Matt’s partner, Colin (Adam Faison), and their British roommate, Nora (Aoife Hinds).

In a plotline plucked straight from season three of “Euphoria,” Riley is all too desperate to eschew her brother’s tender support as she recovers from her ambiguous addiction issues. So, short on cash and urged on by Trevor, Riley steals The Box to make a quick buck, unknowingly releasing the Cenobites and setting into motion Collins’ and Piotrowski’s misadventure in horror.

This quick summary alone is enough to evince the film’s most basic problem: its characters. The characters are serviceable to the story, but one gets the sense that they exist only to be killed. Colin is dating Matt, a welcome bit of inclusion, but other than that, Colin has few complex character traits. Trevor, too, never really progresses beyond being “the boyfriend”; Nora’s English accent and obsession with making tapas round out her profile.

However, there’s always the specter of Riley’s struggles with addiction — hanging over the film like a Walmart cobweb — but even that is reduced to a footnote. Aside from the delightfully deranged antics of Višnjić, “Hellraiser 2.0” dooms itself from the start; the bland, trope-ridden cast sucks the life from any momentum the film’s beginning built.

The one-dimensionality of the film’s leads is nothing new to the horror genre. Horror doesn’t exactly have a stellar track record of character development, especially during the slasher-dominated 80s. But in 2022, aren’t viewers owed a little more, especially considering just how otherwise well-made “Hellraiser” is? It is well-made, full of Disney-dollar sheen and stellar effects.

Everything has been given the Hulu facelift, from the set design to the Cenobites themselves, rendered creatively using primarily practical effects, a rarity in Hollywood remakes of beloved horror flicks. I’m still bitter about the abomination that is 2011’s “The Thing”.

Nonetheless, let’s talk about the Cenobites for a moment. Led by a recast Pinhead (Jamie Clayton), they were broadly advertised as the film’s main attraction. It’s so shocking, then, that the Cenobites don’t really do much in the movie itself.

When they’re on screen, they’re the best part, dripping with otherworldly menace — but across “Hellraiser’s” nearly two-hour runtime, the Cenobites don’t feature nearly enough to compensate for the movie’s deficiencies. With the Cenobites, there was always the possibility that the film could muster enough interest to overcome its chronic blandness. Without them? No chance.

“Hellraiser” is not unwatchable, with enough production value to make for a passable watch this Halloween season. However, for those who loved Barker’s original — or are looking for something beyond the pedestrian — this film simply doesn’t raise enough hell to earn a viewing.