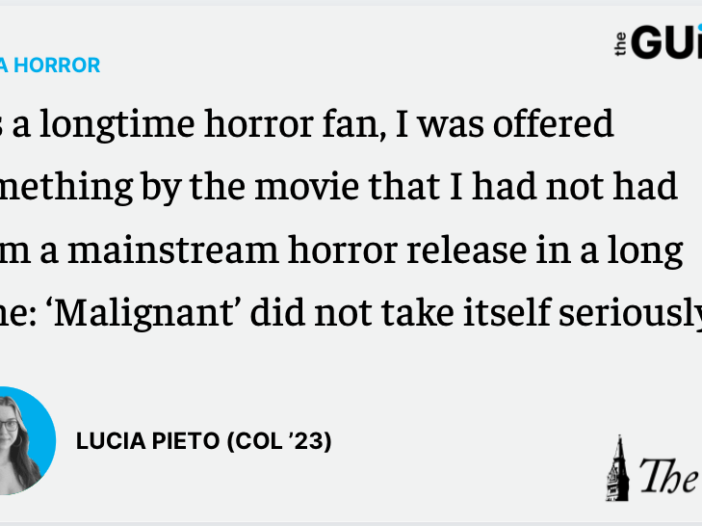 James Wan has solidified his work in the horror canon as a creator and director of three major horror franchises: The Conjuring, Insidious and Saw. Having proved himself again and again to be a master of horror, Wan had room to experiment with the newest addition to his filmography: “Malignant.”

“Malignant” follows Madison Mitchell, a woman who has experienced multiple miscarriages and suffers a traumatic head injury at the hands of her abusive husband. After these horrifying events, she begins to see violent visions of people being gruesomely murdered — visions which ultimately turn out to be reality. Throughout the film, Madison is also haunted by a mysterious figure from her past who possesses a supernatural power that allows him to communicate through electronic devices.

“Malignant” borrows the template for this villain, Gabriel, from the Italian horror and crime book and film genre called “giallo.” Giallo, the Italian word for yellow, refers to pulpy crime paperbacks with yellow covers that were popular in Italy during the early 20th century. Many of these novels were adapted into films in the 1960s and 1970s, popularizing giallo as a movie genre.

The centerpiece of a typical giallo film is a mysterious, black-coated and gloved killer whose identity is not revealed until the end of the film, which also describes the character of Gabriel through his tall and dark, mysterious figure—essentially making him a supernatural giallo villain. Giallo is a slightly obscure genre for a modern mainstream horror film to pull from, so I was excited to see a popular horror director like Wan taking inspiration from this nearly forgotten genre from horror film history.

Since I have some background knowledge on the giallo genre, I will admit that I went into “Malignant” already knowing the twist of the film. Though I would have preferred to go into the viewing experience completely unaware, I have to say that knowing the spoilers did not detract from the film. I thought “Malignant” was completely insane in the best way possible.

As a longtime horror fan, I was offered something by the movie that I had not had from a mainstream horror release in a long time: “Malignant” did not take itself seriously. Though it had a fair amount of good scares and a thoughtful core message about control over one’s own mind and body, the film was first and foremost, for lack of a better word, stupid. Everything from the hokey dialogue to the over-the-top acting and kills, “Malignant” was difficult to find genuinely terrifying and grotesque, mainly because it does not seem like it was meant to be taken seriously in the first place.

Mainstream horror films, as of late, have tended to steer in a more sophisticated direction, generally with deeper meaning and critiques of a given subject that audiences can read into. Some popular examples of this are Ari Aster’s “Hereditary” and “Midsommar,” which represent modern family and relationship dynamics through the context of cults, as well as Jordan Peele’s “Us,” which is an amazing critique of class tension in the United States. Though I don’t take issue with these films themselves, they just do not have the elements of absurdity and cheesiness that make a horror movie fun to watch. These more intellectual horror movies have tended to dominate the genre recently, leaving little room for melodramatic romps to take up space.

In “Malignant,” however, the film taps into the horror genre’s long history of cheesy and overdone plot arcs to deliver a classic scare. In comparison to its modern horror contemporaries, the movie revels in the tropes of its predecessors, bringing the audience back to the days of “Scream” and “Friday the 13th.” Like these classic scaries, “Malignant” has principal aspects of its storyline revolve around mysterious interwoven backstories that backdrop pickling moments of tension just before a jump scare.

“Malignant” takes risks to be fun and genuinely bizarre. For example, the film makes frequent use of dramatic close-ups and genuinely bizarre CGI violence and gore that is reminiscent of trashy horror films from the ’80s. I hope that because of Wan’s status as a prominent horror director, other filmmakers will create more campy films like “Malignant” — that is, films that are only really spooky in their more playful portrayal of the horror genre.