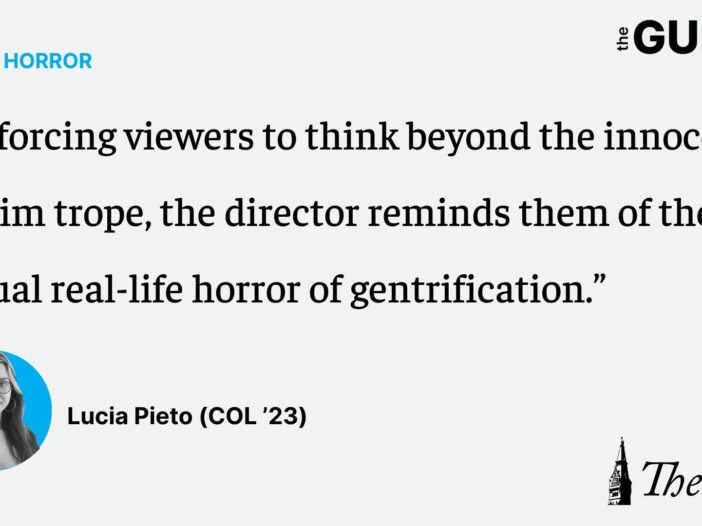 Following the trend of classic horror movie reboots, “The Texas Chainsaw Massacre” (2022) attempts to introduce new social commentary into a world that was previously slashed with surface-level gore.

One of the most influential films in the horror movie genre was Tobe Hooper’s 1974 film “The Texas Chainsaw Massacre.”

In addition to creating the legendary villain Leatherface, the film gave way to eight more adaptations, including its newest installment of the same name which came out this February on Netflix.

The newest film in “The Texas Chainsaw Massacre” universe creatively diverged from its traditional roots by largely incorporating the issue of social class through the issue of gentrification.

The film takes place about 50 years after the events of the first film and follows a group of millennial business owners who have bought an abandoned town in Texas called Harlow to turn it into a fashionable neighborhood.

While attempting to liven up this ghost town, the business owners wrongly evict the elderly owner of an orphanage, where the notorious murderer Leatherface has been living since he was young. Following the eviction, the owner has a heart attack and dies on the way to the hospital, prompting a grieving Leatherface to go on a killing spree.

The movie then takes on the battle of Leatherface versus gentrification, where wealthy young entrepreneurs push poor rural people out of their own neighborhoods in order to make a profit. I enjoyed this particular direction because it takes the franchise’s place as a series of hicksploitation films to a new level of social critique.

A hicksploitation film is a genre of film, typically a subgenre of thriller and horror, that uses fears and anxieties possessed by privileged white audiences about other white people coming from poor rural communities to evoke fear.

The Texas Chainsaw series fits comfortably within this subgenre. It uses the same hicksploitation tropes in a way that directly addresses issues like income inequality, whereas most hicksploitation films merely allude to them. In addition to exploiting anxieties surrounding class differences, the film acts as a cautionary tale about gentrification.

The premise of the film doesn’t hold up those being terrorized by Leatherface as completely innocent as they’ve unjustly thrown a woman out of her house, resulting in her death. This completely changes the dynamic between horror villain and victim.

In most slasher horror movies, the victims aren’t usually painted as being in the wrong or bringing the terror onto themselves. Instead, the violence is usually brought about through the villain’s inherent urge to kill.

In this Texas Chainsaw sequel, however, the catalyst that brings Leatherface to kill again is a particularly tragic instance of eviction. The film gives the impression that it all could have been prevented if the business owners had listened to the owner of the orphanage and refrained from calling the police to have her forcefully removed from her home.

In forcing viewers to think beyond the innocent victim trope, the director reminds them of the actual real-life horror of gentrification and white privilege that is currently haunting the streets of multiple American cities. The film’s willingness to approach a modern, political issue provided the reboot greater meaning and proved the director and writer were very intentional with the creation of the film and not looking to make a quick profit.

While I hope to see new horror films instead of sequels and adaptations, the most recent “Texas Chainsaw Massacre” is a reminder of the need for horror films to address the real modern horrors behind the gore.

Lucia Pieto is a junior in the College. Hoya Horror appears online and in print every other week.