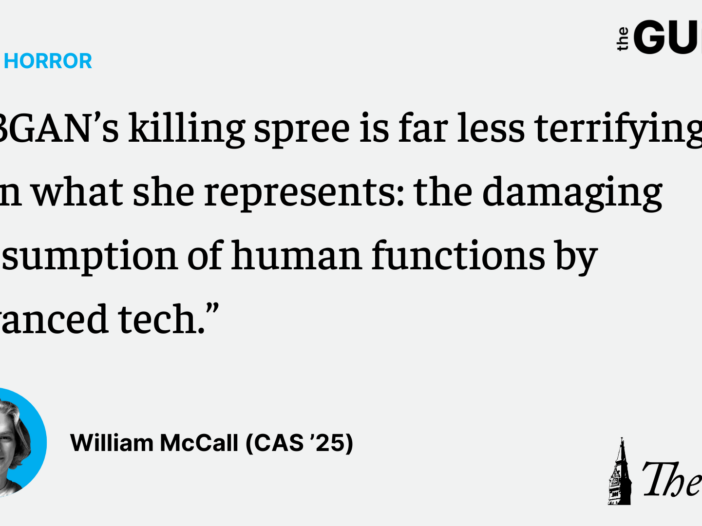 Isaac Asimov, in his “Three Rules of Robotics,” mapped out an ethical framework for human-automaton relations. Unfortunately for the cast of “M3GAN” — Blumhouse’s latest, imperfectly entertaining horror hit — Asimov’s framework is disregarded by the film’s petite, eponymous murder machine.

Directed by Gerard Johnstone, “M3GAN” didn’t look like much at first: “killer doll” movies have become ubiquitous since the release of “Child’s Play” (1988). So, I ought to be excused for rolling my eyes a little when I saw workaholic toy engineer Gemma – “Get Out’s” (2017) Allison Williams – create the eerily human, part-time-Olsen-twin-impersonator “Model 3 Generative Android” (M3GAN for short).

We’ve seen this sort of movie before, and it was only a matter of time before M3GAN (voiced by Jenna Davis) embarked on a rampage, squeezing trite scares out of the mismatch between M3GAN’s girlish appearance and chillingly sangfroid (sangdroid?) bloodlust.

Indeed, for the first hour of “M3GAN,” few of the film’s story beats feel original. M3GAN is gifted to Gemma’s bereaved niece, Cady (Violet McGraw), who becomes attached to the bot as a stand-in for her deceased parents. Tasked with safeguarding Cady’s best interests, M3GAN — à la HAL in “2001: A Space Odyssey” (1968) — takes her primary directive too far, butchering anyone she perceives as a threat to her relationship with her user.

“M3GAN’s” premise is a little too overused, a shortcoming hardly helped by the film’s cookie-cutter dramatis personae. Particularly given its PG-13 rating — meaning that audiences can’t be mollified by a spattering of gore — the pressure is on “M3GAN’s” characters to grab the viewer’s attention. Unfortunately, due to the static natures of those characters, that pressure ultimately goes unalleviated. Johnstone claimed that his team’s resolution to stick with a PG-13 rating was a choice rather than a demand from the studio. If true, his decision was regrettable.

While intermittently disappointing, “M3GAN” is more than just a gussied-up slasher. Portions of the film are admirably devoted to exploring not only the physical threat that AI like M3GAN may pose to humanity, but also the social threat. In an era where parenting is increasingly outsourced to technology, M3GAN is the ultimate iPad, entertaining, nurturing and “protecting” Cady. “With M3GAN,” chirps Gemma in a mock advert for the new toy, “she’ll take care of the little things so you can spend more time on the bigger things.”

There are consequences to this laissez-faire approach. Under M3GAN’s influence, Cady struggles to cope with her parents’ demise, becomes surly towards Gemma and even grows violent when separated from her mechanized pal. M3GAN’s killing spree is far less terrifying than what she represents: the damaging subsumption of human functions by advanced tech. This motif is made somewhat less impactful by the fact that audiences will soon be happily consuming “M3GAN” on their tablets, laptops and phones.

At the same time, “M3GAN” is willing to make peace with its premise’s inherent absurdity (I mean, come on — it’s about a homicidal robot girl). Don’t get it twisted, “M3GAN” is still a tense affair with plenty of shocks, but it is interspersed with genuinely amusing jokes. From an unexpected cover of Sia’s “Titanium” to that dance scene from the movie’s trailer, Johnstone’s film embraces its campiness when appropriate.

2023 has kicked off with a fun, if passable, offering in “M3GAN.” Better films are sure to come, yet “M3GAN” may well be worth the price of admission especially if reports of full theaters are to be believed.

William McCall is a sophomore in the College. Hoya Horror will appear online and in print every other week.