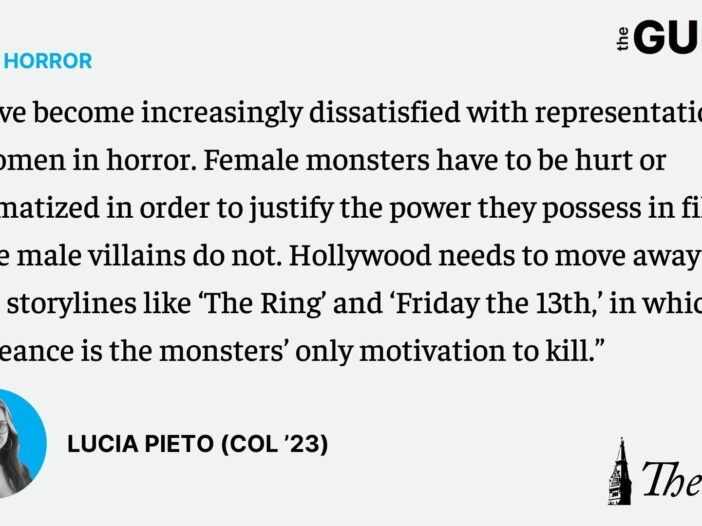 When I was six years old, I referred to the 2004 horror comedy “Seed of Chucky” as none other than the “dolly movie” in front of my father, who had been a fan of horror for most of his life. Although he likely let me watch it so young out of spite for my phrasing, it was for the best, because it launched a life-long love affair with horror films.

As I have become older and wiser, I can see the flaws in the genre I love. I have become increasingly dissatisfied with representations of women in horror. Female monsters have to be hurt or traumatized in order to justify the power they possess in films, while male villains do not. Hollywood needs to move away from storylines like “The Ring” and “Friday the 13th,” in which vengeance is the monsters’ only motivation to kill.

This is not to say that there aren’t great female characters in horror films, including iconic scream queens and “final girls” like Sidney Prescott (Neve Campbell) in “Scream” (1996) or Laurie Strode (Jamie Lee Curtis) in “Halloween” (1978) — I just want to see more women taking on the role of monster. There have, of course, been female monsters who have caught my attention; names that come to mind are Pamela Voorhees (Betsy Palmer) from “Friday the 13th” (1980), and Samara (Daveigh Chase) from “The Ring” (2002). Despite being well-known among general audiences and beloved among horror fans, however, the full potential of these female characters in horror films is not being fulfilled.

Part of this dissonance has to do with the fact that female forms of monstrosity seem to differ so greatly from male ones. Most female monsters have a tragic backstory, or something horrible that happened to them that leads them to kill or haunt their victims. In “Friday the 13th,” Pamela Voorhees decides to kill kids at Camp Crystal Lake to avenge her son, Jason, who died due to the camp counselors’ negligence. In “The Ring,” Samara comes back as a ghost who murders through a haunted videotape after being killed by her mother. The consistent portrayal of female villains acting out of vengeance would not necessarily be problematic if this was also the case for male horror villains.

In contrast to this trope, male horror villains are typically portrayed as natural killers who don’t need to be wronged in order to start terrorizing people. For example Michael Myers (Nick Castle), the antagonist of “Halloween,” begins killing at the age of six after watching a boy come out of his teenage sister’s room while their parents are out on a date. Infuriated by this expression of teenage sexuality, Michael grabs a knife and murders his sister shortly before his parents come home. Myers does not go through any initial traumatic experience before becoming the film’s antagonist; he simply decides to start killing. This luxury is not afforded to female monsters in the horror genre.

The tradition of trauma is all we seem to have in the vein of female killers, severely limiting the roles women can play in horror by victimizing them even when they are portrayed as powerful and terrifying. The antagonist in a horror movie directly wields the power and the capability to scare, so the lack of adequate female representation sends the message that it is not normal for women to be in control of that kind of power. Beyond the lens of violence and horror, it feeds into a stereotype that women are not capable of disrupting society in the same way men are. Viewers are told women must be sympathetic, and by providing reasons to empathize with a female monster, she is prevented from being too disruptive.

Hopefully in the future, we’ll be able to see more interesting and diverse representations of female monsters that prove women are capable of controlling the power dynamics in horror. Young women, who are already underrepresented in the male-dominated world of horror fans, deserve to see themselves represented in their favorite genre. The future of fear should be female.