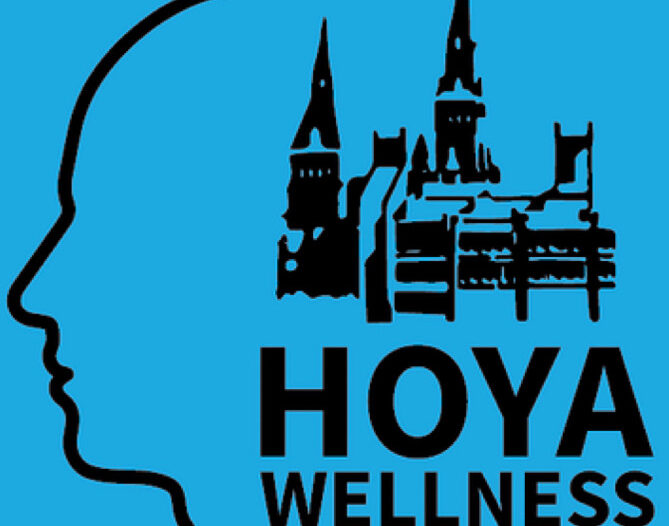 Carter Weinstein’s (MSB ’25) first encounter with anxiety began when he was younger, whenever he would spend time away from home, but rapidly increased to other situations throughout his teen years.  As he grew older, Weinstein noticed the gap between the books psychologists were releasing regarding mental health and the young adults reading them. Weinstein, therefore, took it upon himself to write and release a book regarding overcoming anxiety using his own experiences and sharing the tools that helped him most.

Listen to Weinstein talk about his personal experience battling anxiety as well as the tips and tricks he offers in his book “Conquering Fear: One Teen’s Guide to Overcoming Anxiety.”

MR: From The Hoya, I’m Mia Rasamny (COL ’24), and this is “Hoya Wellness,” a podcast where we will delve into mental health and wellness topics in conversation with members of the Georgetown community. Anxiety is a part of many of our lives, whether this is a daily struggle or something we’ve hardly ever experienced. Living in today’s climate has definitely increased the amount of anxiety we feel on a daily basis. On today’s episode, I sat down with student entrepreneur and author Carter Weinstein (MSB ’25). Weinstein released his first book “Conquering Fear: One Teen’s Guide to Overcoming Anxiety” on the first day of this year after battling through the challenges of anxiety throughout his teen years. Here is Weinstein’s story.

CW: I’m Carter Weinstein. I’m originally from Dallas, Texas. I was born in New York, but I basically lived in Dallas for the entirety of my life. Here at Georgetown, I’m in the McDonough School of Business. So I’m probably going to end up studying finance or management. I’m not entirely sure right now, I’m just trying to get a feel for exactly what I want to do. I’m big into entrepreneurship. My friend from Tulane and I just started our first company this past semester that deals with attendance tracking. So I started that through a club called Georgetown Ventures on campus. I’m also in Georgetown Student Capital Partners, which is private equity and venture capital, and Georgetown Disruptive Tech, which is like new technologies, cryptocurrencies, AI and stuff like that.

MR: Weinstein’s journey with mental health struggles began early in his childhood. He introduces his first time encountering anxiety whenever he would sleep over at his friends’ houses and be away from his home. His childhood struggles and the difficulty in obtaining resources to overcome these situations at such a young age became the main inspiration for his book.

CW: From an early age, going to sleepaway camp was big in Texas. And I know it’s pretty big here in the Northeast as well. So, you know, I recognized from a pretty early age that obviously everybody’s got a level of separation anxiety of not wanting to be away from their family, their friends, but I think certainly mine was amplified to a massive degree, with very miniscule things. And obviously college was in the distance. But if I was ever going to be able to make it to a school like Georgetown, I had to be able to build up to that. So something I’ve talked about in the book is the different exposure therapies that I went through.

MR: A lingering thought at the back of Weinstein’s mind was how he was going to get through college with this level of separation anxiety from such small situations at home. This is when he began exposure therapy, a type of therapy to reduce anxiety that he mentions in the book.

CW: I did multiple summer programs here at Georgetown, as well as other universities, just to kind of prepare myself for this experience. And it was just about building up and getting to the place where I was able to mitigate the symptoms.

MR: In writing this book, Weinstein’s main goal was to get through to young people and make them feel seen and heard. He hoped that in reading the book, individuals, especially young teens, would not feel like their anxiety was abnormal, and that in reality, many people are experiencing the same struggles regarding mental health.

CW: I wrote this book because I found there was a bit of a disconnect between the adult psychologists who were writing the books and the teens who actually needed to read them. Something that I learned along the way is that it’s a bit of an uphill battle. You know, everybody has their own trepidations with anxiety, mental health, stress — part of what I was trying to do in the book was normalize and tear down the stigma, which I think people are doing more and more today. So that was a massive goal. And I think that if people are able to hear my story in my struggles with anxiety or mental health, et cetera, they’ll be able to take away some tips and tricks from it that could be really useful to them.

MR: Weinstein started writing his book well before the pandemic, but it came at a good time to the ways in which the pandemic heightened mental health struggles, including stress and anxiety. He discusses the effect that his book has had on individuals, particularly in today’s climate.

CW: All the feedback so far has been positive. I’ve had the opportunity to go on multiple news networks and be able to talk about the book and express myself. The feedback’s been great so far, I mean, one thing I would emphasize is that it’s a relatively short book. It’s only 100 pages, which might seem like a lot to some people, but relative to some other books, it’s not that many. So it’s pretty down to earth, it gets right to the point, you know, I talk about my personal experiences, and then I get into various tips and tricks that have worked for me. And yeah, I would say specifically with the pandemic, we’ve kind of been sheltered in place for a while, have not been able to see our family or friends, et cetera. So for someone like me, obviously, that’s going to be difficult with my past experiences of anxiety. The pandemic only heightens this, so I think that this was a perfect opportunity to write the book. Even more so not even knowing the pandemic was even going to happen. Coincidentally, it turned out to be, you know, hopefully the content will continue to be a great resource for teens and adolescents who can benefit from this book.

MR: Weinstein shares the biggest takeaways that he hopes his readers take from his book.

CW: I would say the first thing being stressed over and over again, it’s that you’re not alone. You know, there are so many successful celebrities, athletes, artists and musicians, who all have anxiety or have stress, and those successful people in the world are coming forward about their mental health. I think that everybody’s got their own idiosyncrasies, whether that is stress-related or, whatever it might be. So I think that’s the first step in recognizing, I think the second step would be understanding that it’s a bit of an uphill battle. And like I said, it’s a marathon, not a sprint, there’s really no magic pill to fix it overnight. So you’ve just got to be willing to work and try out what works. You know, what works for me might not work for you, and what works for us is not going to work for someone else. That’s just kind of the way it works. If you’re able to evolve and adapt to better yourself, at the end of the day, I would definitely say the hard work is worth the success.

MR: Before we end today’s episode, here are some tips that you can incorporate into your everyday life to reduce anxiety, if you’re struggling.

CW: I’ll just say a couple of tips and tricks that I haven’t listed in my book, I mean, the first one, just some obvious ones. You know, meditation, deep breathing, visualization, these are all things that help. Something that I have in the book is called an anxiety ranking chart. What you’re able to do is, one through ten, rank the things that make you the most anxious to the least anxious, like your normal state. And often when we’re able to rationalize our own fears, anxieties and stress that we have in our life, we’re able to better conceptualize why we’re feeling the way that we’re feeling and get down to the crux of it. I think often when they’re laid out in front of us, and we actually are talking like, does this actually make sense? I talked about this in the book in the beginning, about fear and why we have it. Fear was developed during the caveman era, so cavemen didn’t walk into fire, they didn’t jump off a cliff, and frankly, it’s become a bit outdated, in terms of our mind is almost taking over and giving us these irrational fears. Obviously, no one today is going to, you know, jump in fire, et cetera. And so, you know, thank God for that. But still, I think we let ourselves get consumed by fear, and our own brain has adapted over time. In terms of how my anxiety has changed, you know, I still have the school stress that’s always been there with the work, and the rigor of the work and how much I have been able to find that work-life balance. And certainly going into college, you have a lot more freedom than when you’re in high school — at least that’s been my experience. So it’s about managing your time and, like I said, just trying to find the balance between your social and work life. You guys can get the book. You guys can learn more about the book on carterweinsteinbook.com. Or just go to Amazon and type in “conquering fear.” It’s on Kindle. It’s on print too.

MR: This podcast was recorded, edited and produced by Mia Rasamny. A special thanks to Carter Weinstein for speaking with The Hoya.