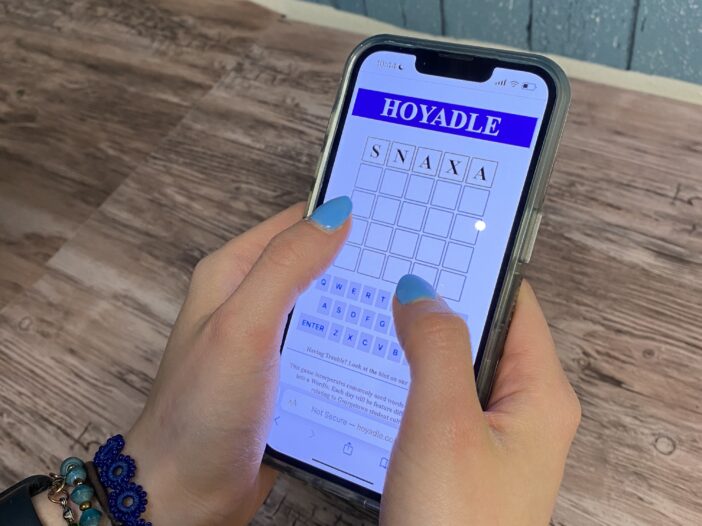 The game, which was created by Chris Delaney (MSB ’25), launched April 5. Hoyadle is a spoof of Wordle, the daily game where players have six tries to guess a five letter word. It features campus-related words like Snaxa, after the student-run store Hoya Snaxa, and Yates, the on-campus recreation center. On its first day, the game had 2,000 players, and it has averaged an engagement of around 1,000 players every day since, according to Delaney.

Delaney said he was not expecting the game to become so popular.

“I didn’t really go into this with any expectations but as soon as we released it on the first day and started spreading the word, it really took off,” Delaney said in an interview with The Hoya. “The amount of usage that we got right away and the amount of players that we have consistently is very surprising.”

There have been many spoofs of Wordle including Letterle, a one letter guessing game; Taylordle, a Taylor Swift themed Wordle; and Wordlerry, a Harry Styles inspired Wordle.

Inspired by the countless variations of Wordle, Delaney said he decided on a whim to code a Georgetown-themed Wordle in his free time earlier this month.

Meredith Lou (COL ’24) heard about the game when her friends sent it to her, and said Hoyadle is only the latest variation of Wordle she has played.

“Just Wordle is not enough for me, I’m fiending for more,” Lou told The Hoya. “It’s the fourth variation of Wordle that I’ve done, and I think it’s really fun.”

Delaney created a Wordle simulator earlier this semester as a side project because he thought it would be interesting to figure out what the back end of the game would entail.

Delaney said this previous experience prepared him to create Hoyadle in just a few hours.

“I really already had the logic down of how to make the game so I essentially just had to make it look nice,” Delaney said.

Delaney said he had to alter the programming of the game after creating a longer word bonus feature.

“I recently added a bonus feature where the word is a little bit longer and it’s a little bit tougher. So I had to completely refigure the original program to be able to handle that. So there have been a lot of little challenges like that,” Delaney said.

It has been fun coming up with Georgetown-themed words to use in the game, Delaney said.

“One of the fun parts was brainstorming with my friends about five-letter, Georgetown-related words that we could use in the game, and we ended up coming up with a lot more than I initially thought there were,” Delaney said.

Even graduates and parents of Georgetown students have begun to play the game, which came as a shock to Delaney.

“I mostly expected students because the game is catered toward students,” Delaney said. “A lot of the words are kind of slang or lingo used around on campus, so I was really surprised that non-current students were playing the game.”

Brendan Foody (MSB ’25), a friend of Delaney’s, helped Delaney buy a domain for the game and publish the Hoyadle website.

Foody said he has enjoyed working to create Hoyadle.

“It’s pretty cool to have a product that’s specific to the Georgetown community,” Foody told The Hoya. “It’s something so simple, but it still gained a lot of traction and has a lot of people playing. I think it’s awesome and fun to be a part of.”

“I liked the original Wordle so I thought I would give it a chance,” Hermelin wrote to The Hoya. “I think it’s cute because it’s Georgetown themed.”

Delaney said he is working on advertisement deals with local businesses, including Saxby’s, a coffee shop located a couple blocks from campus that is owned by a Georgetown graduate..

Delaney has also received offers from student groups, including the Georgetown Program Board, which plans various campus-wide events, with word suggestions to use for the Hoyadle.

“The Georgetown Program Board offered us to make the word GUDAY for Georgetown Day in exchange for a shout out on their stories,” Delaney said. “Things like that will make me have to go in and change it, but the upkeep really isn’t too much.”

The game could benefit from adding more features that Wordle offers, according to Lou, such as showing players the distribution of their scores as they play each day.

Delaney said it has been rewarding watching the reception to Hoyadle.

“It was really cool to see the game that I just thought of on a whim come to life within one night,” Delaney said. “I just find it really cool that it took off as much as it did.”