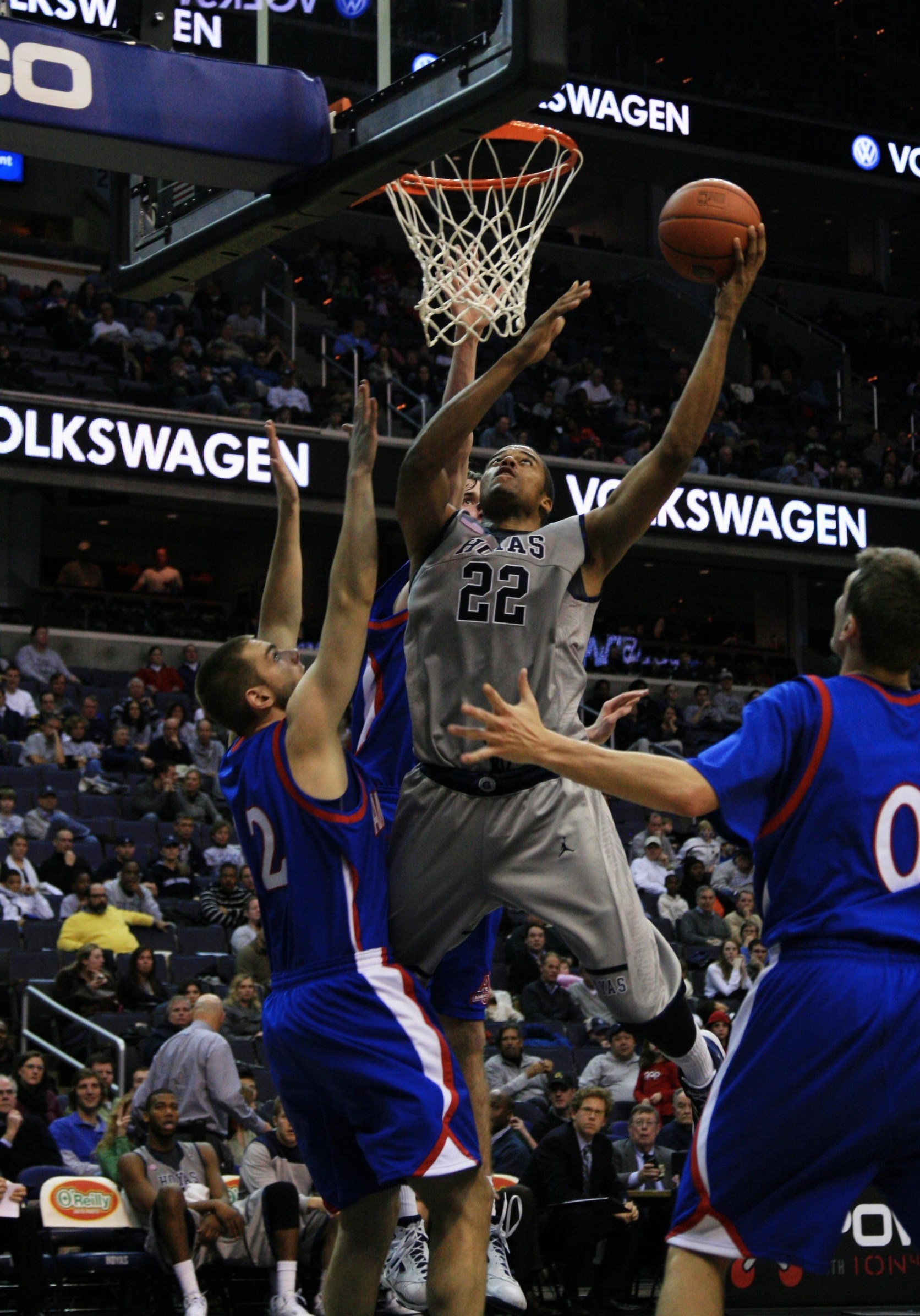 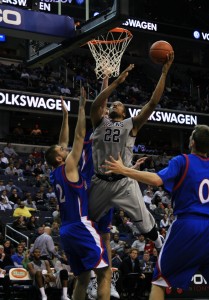 Image Contributor
Junior forward Julian Vaughn goes up for a shot in Saturday’s 73-46 win over American. Vaughn had 11 points in the contest.

With a trip to America’s most famous arena coming up, a home matchup against 1-7 crosstown rival American gave Head Coach John Thompson III one last chance to survey his team.

“I don’t know that I’d ever say that we’re where we should be, but we’re getting better and I think we’re a significantly better team today than we were at the start of the season,” Thompson said.

In its last tuneup before facing back-to-back ranked opponents next week, No. 16 Georgetown (6-0) rolled to an easy 73-46 victory over American on Saturday in front of 10,465 at Verizon Center. The Hoyas were led by a stifling defense that forced 13 turnovers from the two-time defending Patriot League champions.

Despite the final margin of victory, the game remained relatively close in the early minutes thanks to two Hoya turnovers and a few defensive stops by the Eagles. Holding a 14-9 advantage, sophomore guard Jason Clark, who has become something of a defensive star so far this season for Georgetown, stepped into the passing lane and took freshman guard Daniel Munoz’s pass the other way for a dunk that ignited the home crowd and jump-started the team.

Sixty seconds later Clark did it again, this time at the expense of sophomore forward Riley Grafft, as he converted a steal into two points with another dunk to give the Hoyas a 19-9 lead, capping off a 10-0 run.

Clark, who has 15 steals so far this season, had five on the day, four of which came in the first half to go along with nine points and three boards.

“[American assistant coach] Robert Burke was pointing out to our guys that Jason [Clark] has great anticipation with a seven-foot plus wingspan so he can really play the passing lanes,” American Head Coach Jeff Jones said after the game. “We were kind of hanging around and all of a sudden he makes big plays and gets big baskets.”

Freshman guard Vee Sanford added two steals of his own as the Hoyas came away with 10 on the day. That high pressure defense enabled Georgetown to convert 18 points off of turnovers compared to just five for American.

Throughout the first half, and much of the game, the Hoyas’ defense made life difficult for American’s shooters. Whether it was getting a hand in the face of a jump shooter or blocking shots in the paint, a Hoya seemed to be wherever an Eagle was. Georgetown had four first-half blocks, and nine for the day, forcing the American offense to rely on jump-shooting that was as cold as the wintry mix falling outside the arena.

The Eagles, who shot 27.1 percent from the field for the game, went 9-of-30 from the floor in the first half. No one’s day exemplified the Eagle’s struggles more than sophomore forward Stephen Lumpkins, who, after starting 1-of-3 from the floor, missed his last 14 shots, thanks in part to the strong defense of sophomore center Greg Monroe, who had four blocks on the day.

“We struggled to put the ball in the basket. When you look at those nine blocked shots, they were basically layups and pretty high percentage shots against anybody we’ve played up to this point,” Jones said.

On the offensive end, while the Hoyas did not necessarily dazzle in the early going, they did manage to go 14-of 25 (56 percent) from the floor in the first half to enter the intermission with a comfortable 34-23 lead.

The Hoyas’ frontcourt took advantage of the under-sized Eagles on offense, scoring 40 points in the paint. Georgetown shot 50 percent from the field as a team, and nine players entered the scoring column.

Sophomore forward Henry Sims had a career-high 12 points in just 13 minutes. Sims, who shot 4-of-7 from the field and 4-of-5 from the free throw line, scored in a variety of ways. Over a four minute stretch near the end of the first half, Sims scored twice on put-backs off of offensive rebounds, and laid in a basket after running the floor and cutting through the lane on a fast break.

Sims’ previous career-high was eight a year ago against Savannah State, and he had just eight points over the last four games.

onroe had a quiet nine points on 3-of-9 shooting, but grabbed a career-high 13 rebounds. Junior forward Julian Vaughn scored 11 points on 5-of-6 shooting.

“For the first time for extended minutes, I thought [Benimon] was very good and very comfortable,” Thompson said.

The forward had been sidelined early on in practice with an ankle injury, and Thompson talked about how it was important for Benimon to get reps both in practice and games.

Junior guard Nick Hedra led all scorers with 14 points for American to go with his team-high nine rebounds and four assists. American has struggled early on this season after winning back-to-back league titles and graduating almost all of its significant contributors.

“You have to give those guys a lot of credit,” Thompson said of the Eagles. “They’re going to be much better in the second semester.”

The Hoyas will travel to Madison Square Garden Tuesday evening to play No. 23 Butler in the Jimmy V Classic. Next weekend they will fly to Anaheim, Calif., to play No. 12 Washington in the John Wooden Classic.

The games will be Georgetown’s first two against ranked opponents and will offer a measuring stick for Thompson and the Hoyas four weeks before conference play begins.

Follow us on [Twitter](https://www.twitter.com/thehoyasports) and be sure to keep up with all the action at [The Hoya Paranoia](https://blogs.thehoya.com/paranoia)”