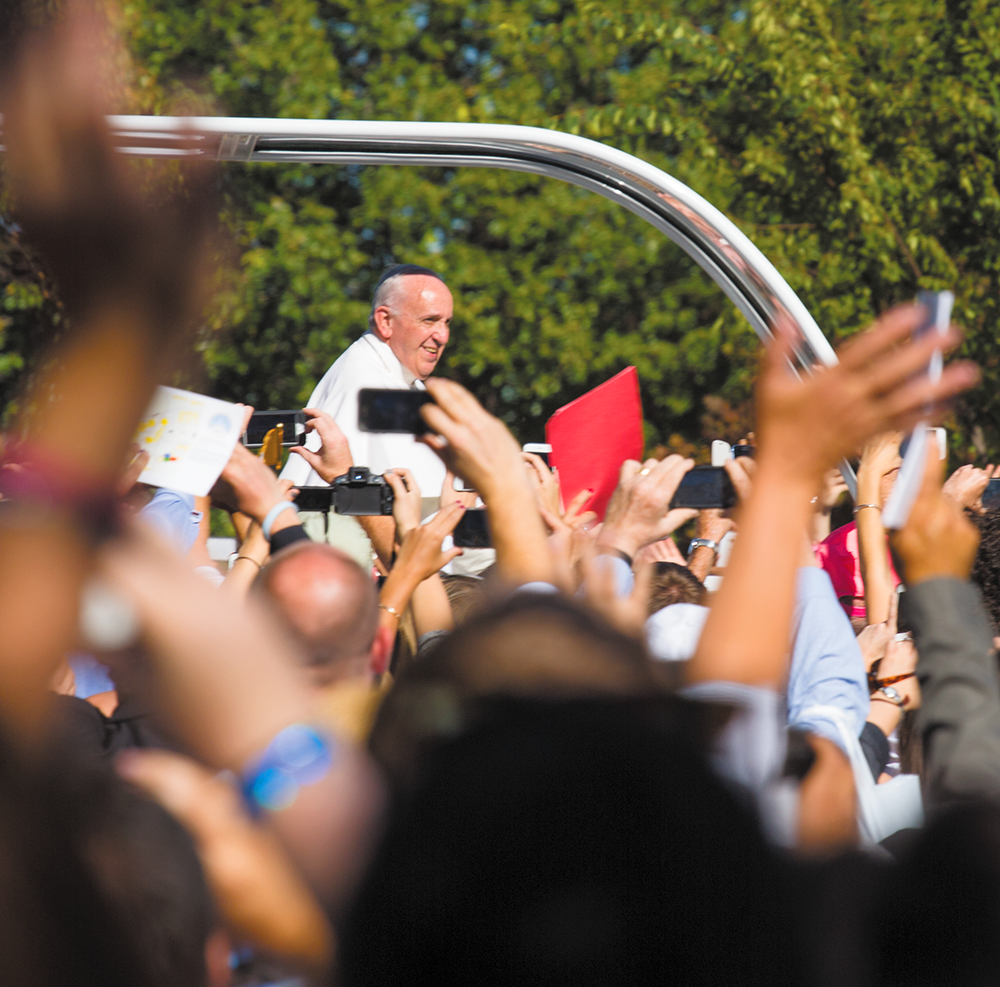 Pope Francis began his first trip to the United States with a tour of Washington, D.C., from Sept. 22 to 24, marking the third papal visit in the District’s history.

President Barack Obama and his family greeted the pope as he arrived at Joint Base Andrews on Tuesday afternoon. The papal visit also included a meeting at the White House, a parade, an address to U.S. bishops, a canonization Mass and a historic address to a joint session of Congress.

In preparation for the papal visit, Mayor Muriel Bowser’s office launched pope.dc.gov, a website outlining the pope’s schedule, city road closures and general information regarding security for all events.

Bowser uploaded a brief video to the site Wednesday, highlighting how the visit impacted the D.C. community.

“I am personally inspired by the pope’s words and actions. I believe his visit will serve as an inspiration to people of all ages, of all backgrounds and all cultures,” Bowser said. “We are delighted that the pope has chosen our district as his first official visit in the United States.”

Wednesday’s festivities also marked the height of the frenzy for many Georgetown students, with Pope Francis’ parade around the Ellipse in the morning followed by the Mass of canonization of Blessed Junípero Serra at the Basilica of the National Shrine of the Immaculate Conception at 4 p.m.

Pope Francis is the first Jesuit pope in history. He was photographed holding a Georgetown scarf presented to him by six Georgetown students and faculty members who participated in a Religious Freedom Project trip in December 2013. Although the pope did not visit the university during his trip, many members of the campus community attended various papal events.

The parade, which was the first public event, began at 11 a.m., traveling from the White House along 15th Street, Constitution Avenue and 17th Street NW, with people lining the route and cheering as Pope Francis passed by in a Fiat.

Women and gender studies professor Emerald Christopher-Byrd, who lives in the Brookland neighborhood home to the basilica, cancelled classes this week because of transportation challenges, but added that the atmosphere of the area was exciting throughout the papal visit.

She said officials in the region began setting up and closing off streets one week before the visit, making transportation difficult.

“All of our shops and restaurants had pope-themed specials. For those that opted to drive, we had an influx of parked cars in our neighborhoods,” Christopher-Byrd said. “However, despite the traffic and high volumes of people, the energy in Brookland has been wonderful.”

Georgetown students and faculty had the opportunity to enter a raffle for tickets to the Mass that were allocated by the university last week. Winners were notified Monday.

Roopa Mulpuri (SFS ’18) was one student who attended the historic Mass, even though she is not Catholic herself.

“I had never been to Mass before and I think it’s probably one of the coolest things that I’m ever going to get to do to in my entire life,” Mulpuri said.

Hannah Weber (NHS ’17) said she arrived to wait in line around 10 a.m. for the late-afternoon Mass, but enjoyed the long day.

“It was surreal. I had to keep reminding myself that it was the Pope that was giving Mass. Everyone who was there was so excited and floored that he was there,” Weber said.

The pope celebrated Mass in his native language, Spanish, with more than 20,000 people on the Catholic University of America’s campus.

This was also the first canonization in the United States. Screens near the altar projected subtitles in English.

Attendee Lydia Hennessey (COL ’18) said that although she does not speak Spanish, it did not deter from the joyous atmosphere.

“Although I could not understand a lot of what was being said at the Mass, it was really the music and mood that conveyed his message, which was one of universal embrace,” Hennessey said.

Hennessey was also among the students who won university tickets to watch the pope’s address to a joint session of Congress on Thursday at 10 a.m. People gathered on the West Lawn of the Capitol, watching the address projected on screens. Afterward, the pope emerged on a balcony to address the crowd, this time speaking in English.

“Even though English isn’t the pope’s native language, I thought that his line about treating people with passion and compassion showed such beautiful thought,” Hennessey said.

Alec Kingston (SFS ’18) was also outside the Capitol and said he felt emotional seeing the pope speak.

“It was so awe-inspiring. On the lawn you could actually feel and see all the different people from different backgrounds come together for this one person,” Kingston said. “Pope Francis is the only person in the world I know who could unite people in such a way and create such awe. When he first came out I had tears in my eyes and he hadn’t even said anything yet.”

However, Kingston added that while the address was moving, he also wished Pope Francis had added some Spanish.

“In a way, even if you don’t understand the native language, there is an essence that comes from someone’s native language, and when you translate, sometimes part of the message is lost,” Kingston said. “I feel like if it had been fully in Spanish, we could have felt more of what I heard people felt at the mass.”

“I was astounded by his presence — the grace with which he carries his tremendous responsibility, the mindfulness he expresses in every word and action, and the simplicity with which he unpacks complicated issues,” Roberts said. “I feel so lucky to experience this momentous visit at our nation’s capital and hear such an inspiring man speak on issues that affect us all.”

Following his appearance at Congress, Pope Francis met with Catholic Charities USA at St. Patrick’s Church before departing for the next leg of his trip in New York City, where his schedule includes a speech at the United Nations, service at the 9/11 Memorial and Mass at Madison Square Garden. The pope will conclude his United States tour in Philadelphia and return to Rome the evening of Sept. 27.