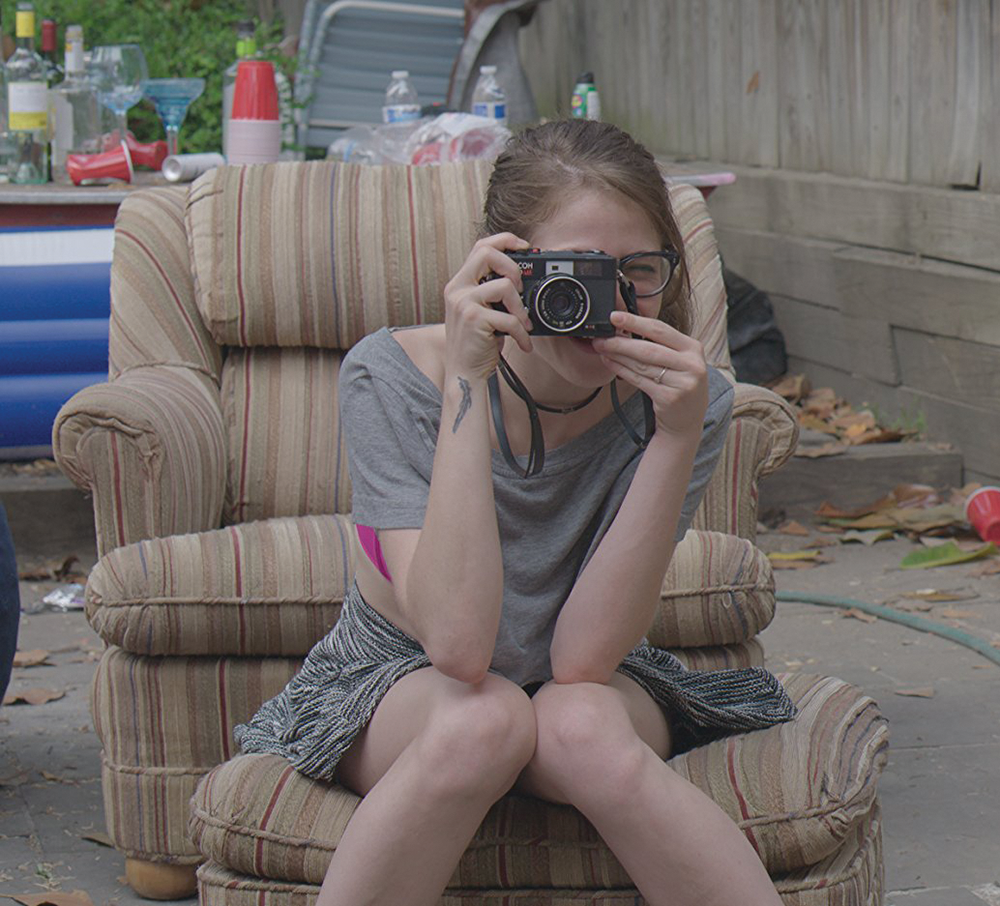 When Brent Craft (MSB ’08) concluded his athletic career after graduation, he shifted his focus to an entirely different passion: filmmaking.

After spending time in Los Angeles after college to work on the sets of television shows like “Friday Night Lights,” Craft began dedicating his time to an independent film project. The result was a collaboration between Craft and his family members — through blood or Hoya spirit — and a subtle tribute to his Georgetown experience.

After two years of hard work, Craft is set to release the product of his commitment Oct. 10: “Lady-Like,” a hilarious college comedy set in Georgetown.

“Lady-Like” was born of Craft’s creative abilities and intense commitment, both of which found their start at Georgetown. Craft spent his time at Georgetown dedicated to football, but he admits he always thought he would enter the entertainment industry after finishing his football career.

“I wanted to focus on sports until I couldn’t anymore, knowing that that window in life was going to close,” Craft said in an interview with The Hoya.

“When we travelled to away games, I would always write scenes, mostly comedic, and pass them around the bus and see if I could get guys to laugh. A lot of my writing started like that,” Craft said.

Following graduation, Craft played for the Arena Football League, and during the offseason, shot “Friday Night Lights.” The experience gave him his first glimpse of a set and allowed him to develop his understanding of the film industry, experiences that proved useful when he began production of “Lady-Like.”

After a few years of working in LA, Craft decided to dive headfirst into the independent filmmaking process.

“The old-fashioned way to create a film is to write a script and then have it get picked up by a studio,” Ryan Craft (MSB ’06), an executive producer of the film and Brent Craft’s older brother, said. “The idea that Brent was going to take his own script and get it made took a lot of courage, but I think he thought it was the best way to get noticed.”

The film, which follows a group of girls in college, is based on the younger Craft’s experience at Georgetown.

“Brent knew some girls at Georgetown that were really dynamic and hilarious,” Ryan Craft said. “He thought that sometimes girls don’t get as much credit for being as raw and funny, so he wanted to explore that idea.”

Shot primarily in a townhouse on O Street, the film also features locations frequented by Hoyas, such as the Lincoln Memorial, The Tombs and Sweetgreen.

After developing the idea with a manager in LA, Craft moved back to New York City and teamed up with his friend Matthew Nemeth (COL ’07) and his older brother to get the project off the ground.

“At the beginning, it was sort of just the three of us,” Nemeth said. “Originally, I was just going to work with Brent on the script and help with preproduction, but since it was a small-budget project, I ended up doing a lot more.”

Once the initial team was assembled, it tackled its first obstacle: funding.

After the budget fell into place, the casting began to come together, too.

“At first, Matthew Nemeth and I were casting using a free platform called Backstage in New York,” Craft said. “But we were getting great responses, so we decided to bring in a casting director and try to cast a few bigger names that would’ve been difficult to get otherwise.”

“[The casting agent] really connected to the project and the story and helped Brent find actors, which was part of the reason we were able to get this done on a shoestring budget,” Ryan Craft said.

The “Lady-Like” cast features Stephanie Simbari of Oxygen’s comedy series “Funny Girls,” Sarah Moliski of “Unbreakable Kimmy Schmidt,” Maddie McGuire of “ER,” and Allie Gallerani of “The Good Wife,” in starring roles. Shooting for the film began in May 2015.

“I was drawn to the film because it reminded me of ‘Bridesmaids’ in terms of its raunchy humor and depiction of female friendship,” Gallerani said in an interview with The Hoya. “I remember laughing out loud at the script when I read it for the first time.”

Creating “Lady-Like” was no small feat: It was the result of the hard work and dedication of the core members of the team. Aside from Brent and Ryan Craft and Nemeth, several other Georgetown alumni played integral roles in the film’s production: Darren Craft (MSB ’08), Brent’s twin brother, served as a producer, co-producer Matt MacNelly (COL ’08) helped coach actors and associate producer Darren Alberti (COL ’08) also acts in the film.

Back to the Hilltop

Once “Lady-Like” began materializing, it became clear that Georgetown would play a large role in its creation. This connection begins with the Craft family: Brent, Ryan and Darren’s father attended Georgetown as an undergraduate. The two Craft sisters are also members of the Hoya family — one attended summer courses at the university and the other received her Master of Business Administration from Georgetown.

“I also met my wife at Georgetown,” Ryan Craft said. “We’re a pretty Georgetown-centric family, and we fell in love with the campus and the town — the cobblestone, the tree-lined streets, the townhouses — and we loved Washington, D.C.”

Brent and Ryan Craft’s love for the neighborhood led to it being the primary filming destination.

“The idea of filming it where home is for us was very important,” Ryan Craft said.

“I wanted to capture everything that comes with Georgetown,” Brent Craft said. “I personally think that there aren’t enough films shot in Washington, D.C., so I thought that it had a lot of value to add.”

Though many distinctively Georgetown locations are featured, Craft decided not to explicitly refer to Georgetown University in the film as he wanted it to feel like any college experience.

All of the film’s on-campus scenes were shot at Princeton University. Still, the heart of “Lady-Like” bleeds blue and gray.

“We really leaned on fellow Hoyas that were working in and near and around film and entertainment,” Craft said.

Although the cast and crew of “Lady-Like” includes several Hoyas, none of the film’s core creators were involved in film programs or organizations while at Georgetown.

“The film program at Georgetown really wasn’t big enough at the time I was there,” Craft said. “I never could dedicate my resources to that as opposed to football.”

Nemeth had a similar experience. “By the time I was a sophomore or junior I knew that I wanted to work in film or television, but it felt like I’d exhausted everything that Georgetown had to offer on that front,” he said.

The development of the film and media studies minor since the graduation of the Craft brothers seems to mark a forward progression in film at the university.

“In the past decade there’s been a big movement of film at Georgetown,” Ryan Craft said.

The development of “Lady-Like” demonstrates the increased access young filmmakers have to the industry.

“It’s amazing what’s available to you at this day and age if you’re willing to educate yourself on it and utilize it,” Craft said.

He cited free platforms such as Kickstarter for fundraising and Backstage for casting, and he described the ease with which individuals can find and use editing software and cameras.

“It’s all far more accessible than they’ve ever been in history — it really does give an independent filmmaker a chance,” Craft said.

Nemeth echoed this sentiment, saying, “You have to just do it. It’s a lot easier now than it’s ever been.”
“Lady-Like” quickly moved into post-production with the goal of submitting to the festival circuit.

“We were really hoping for [the] Tribeca [Film Festival] because of our connections to New York,” Ryan Craft said. “But unfortunately we got cut at the end. The woman who runs the department called us and said, ‘We loved your film — you were a heartbreaking last cut, and we’re so sorry.’”

Despite this disappointing loss, “Lady-Like” still received recognition. The film was accepted to the Sunscreen Festival, a film festival in Tampa, where Craft ended up winning Best First Time Director.

“Lady-Like,” while truly a collaborative effort, ultimately got its start with Craft’s dedication.

“Brent has always had an artistic slant for things,” Ryan Craft said.

Nemeth agreed, saying that Brent is what drew him to the film. “He’s got a magnetism to him, and he really believed in this project. Seeing him this passionate made me want to help tell the story,” Nemeth said.

“I wouldn’t be lying if I said there’s been a lot of blood, sweat and tears poured into this thing,” Ryan Craft said. “It’s been a long slog of a project, but it came out in such a great way.”