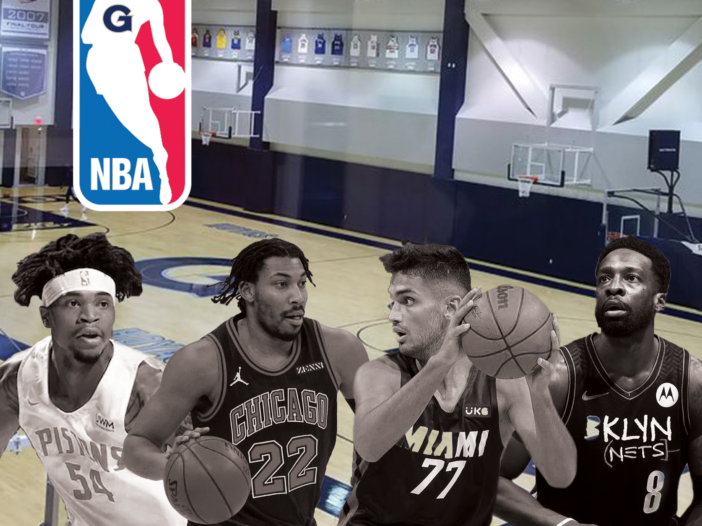 Georgetown University is historically a basketball school, an integral part of its identity that complements its Jesuit tradition and academic success. Georgetown is the alma mater of Allen Iverson, Patrick Ewing and 44 other former Hoyas who have gone onto play in the National Basketball Association (NBA), basketball’s highest level. This upcoming season, four Hoyas will perform on the NBA stage and continue Georgetown’s prestigious basketball legacy: Jeff Green (COL ’12), Otto Porter Jr., Jamorko Pickett (COL ’21) and Omer Yurtseven (COL ’20).

Ever the journeyman, Jeff Green joins the Denver Nuggets this year, his 11th franchise in 14 NBA seasons. Though he was an athletic ball handler and skilled passer at Georgetown from 2005 to 2007, Green has reshaped his game to fit the modern NBA by spotting up in the corner to drill three-pointers. Last year, Green averaged 11 points per game on outstanding 41% shooting from beyond the three-point arc for the Brooklyn Nets. This skill set gives Green’s teammates the space to directly drive to the basket, making Green a valuable role player.

In the 2021-22 season, Green will likely back up rising star Michael Porter Jr. at the small forward and power forward positions, providing crucial shooting ability for a loaded Denver team. Additionally, Green’s combination of size and lateral quickness allows him to switch onto various opponents on defense. Green has become a perennial playoff impactor, playing in five of the last seven playoffs and assisting stars like Lebron James, Kevin Durant, and James Harden along the way. With Green joining a perennial playoff contender in the Nuggets, he will look to provide the foundation that leads to playoff success.

Otto Porter Jr., who attended Georgetown from 2011 to 2013, hopes to shake recent injury woes with a fresh start with the Golden State Warriors this year, after only playing in 98 games in the past three seasons combined. His last relatively healthy season was in 2018-2019, when he averaged 13.9 points on an impressive 41% from three-point range. Since then, his inconsistent health and spotty shooting performances led him to fall out of the rotation for the Chicago Bulls and Orlando Magic. This enabled the Warriors to steal him this offseason for a bargain of a mere $2.4 million. Alongside stars Steph Curry and Klay Thompson, the Warriors hope that the eighth-year veteran can be a tall wing off the bench, play good defense and knock down open jumpers, which will make the Warriors’ notorious three-point barrages that much more lethal.

Jamorko Pickett graduated from Georgetown this spring after averaging 12.2 points and 7.2 rebounds per game for the Hoyas and leading the team to its first National Collegiate Athletic Association (NCAA) tournament berth since 2015. Pickett’s success earned him a two-way contract between the Detroit Pistons and their NBA G-League affiliate, the Motor City Cruise. Pickett went undrafted in the 2021 NBA Draft but earned a roster spot after an impressive Summer League stint, in which he showcased his ball handling, passing vision, and three-point shooting skills. He isn’t expected to see significant playing time in his rookie year, but Pickett is the prototype roleplayer that every team needs: a long, athletic wing who can guard quicker and larger perimeter players alike, all while shooting well from three-point range.

Omer Yurtseven spent his first professional season last year with the G-League’s Oklahoma City Blue, performing well enough to earn a contract this offseason with the Miami Heat. In his lone season with Georgetown, Yurtseven averaged 15.5 points and 9.8 rebounds per game using his seven-foot frame and strong interior scoring ability. For the Heat, the 23-year-old will be the third-string center behind superstar Bam Adebayo and Dewayne Dedmon. He will likely only get minutes if injuries arise. Still, if Yurtseven buys into the famed Heat culture, he will have a chance to grow within its strong player development program and rigorous physical requirements for years to come. Recently, undrafted players like Duncan Robinson and Derrick Jones Jr. have found niches in the Heat’s playstyle and earned long-term contracts in Miami. Hopefully Yurtseven can follow suit.

These four Hoyas will provide a medley of shooting, defense and intensity for their respective squads this upcoming NBA season. The two veterans, Green and Porter, will contribute for their teams come playoff time while the two rookies, Pickett and Yurtseven, will expand their game to gain more playing time. But no matter what, they will be Hoyas. And they will make us proud.