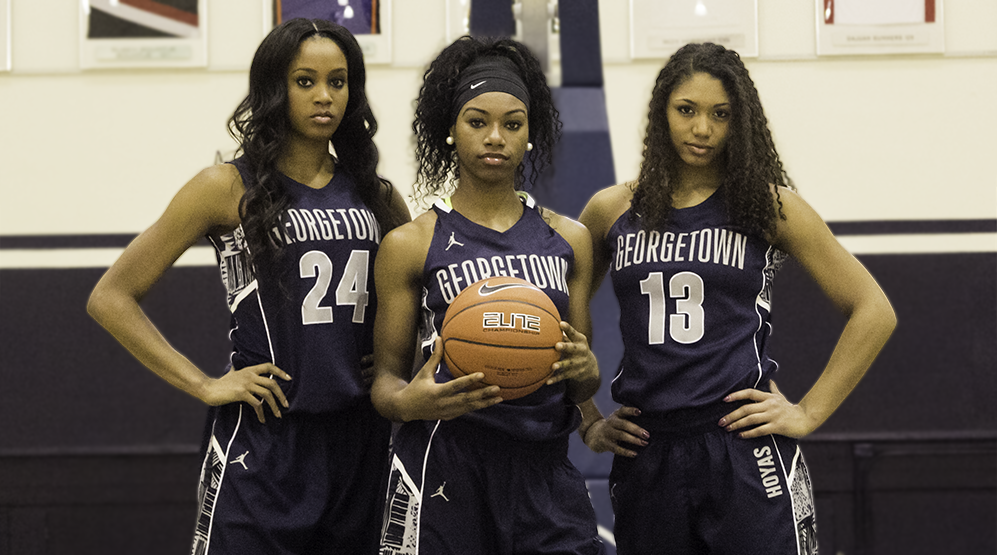 With basketball season finally here to quiet the rather unusual amount of offseason drama, energy grows by the day on the floor of McDonough Arena. Yet just a year removed from having the 16th-ranked recruiting class in the country, two of Georgetown’s most skilled players have departed, leaving the already young team with only three sophomores.

Undoubtedly, the two biggest pieces of offseason news were the hiring of former Georgetown assistant coach Natasha Adair as head coach, and Big East Freshman Player of the Year Natalie Butler’s decision to transfer to the University of Connecticut.

Butler’s choice to leave for the back-to-back NCAA champion Huskies may have been Georgetown’s toughest loss of the season. Butler, a 6-foot-5-inch center, averaged a double-double with 13.3 rebounds and 13.9 points per game and was the only Hoya to start and play in every game last season. As a freshman, she averaged over 36 minutes of playing time per game and would have provided invaluable leadership to a team without any seniors.

The Hoyas do return sophomore guards Jade Martin and co-captain Tyshell King, and sophomore forward Faith Woodard, who all gained valuable minutes last year and contributed from the beginning. Woodard averaged 31 minutes and over 10 points per game, finishing third on the team in rebounding and second in assists. Martin and King also averaged double-digit minutes per game as freshmen, which will help them develop into key contributors this year.

Although replacing Butler’s size and ability to rebound will not be easy, freshman center Yazmine Belk, a three-star recruit from Nazareth Regional High School in New York, is in prime position to succeed. She averaged 10 rebounds a game in her final year at Nazareth and was lauded by scouts for her ability to get to the rim and finish in traffic. She should fit well into Adair’s philosophy, which emphasizes defense and rebounding.

“We have so many players over 6 feet that we need to be disruptive on the wing and inside, but we also need to be a better rebounding team. So, those will be two of our biggest focuses: defense and rebounding,” Adair said.

As the team’s only center, Belk should see early minutes from the outset and begin to make an immediate impact down low and on the glass.

Another new addition that should help compensate for the loss of Butler is the nation’s 60th-best recruit according to ESPN, Dorothy Adomako. At 6-foot-1-inch, Adomako is tall for a wing and a perfect example of  the quick, smart players that Adair favors. In addition to her impressive 21.5 points per game during her senior year at Cosby High in Midlothian, Va., her ability to rebound and steal the basketball make her a complete player. The Big East Preseason Freshman of the Year  averaged nine rebounds and nearly three steals per game, a skill set  which will help Georgetown not only replace Butler’s production, but also fix other fundamental problems like a porous defense and turnover-prone offense.

As one of the youngest teams in the country, some early growing pains will only be natural for the Hoyas. However, the long-term benefit of such a young team is the immediate on-court experience that the five-member freshman class will receive.

“On the court, experience is going to be the best teacher, and as coaches, we’re going to have to have patience,” Adair said.

To ensure the beginning of a turnaround this season and as a program, the Hoyas must improve on turnovers. Last season, Georgetown ranked an abysmal 332nd out of 343 Division I teams in turnovers, at 19.8 per game, and it was third from last in turnover margin at -6.91 per game, good for 341st place.

There are positive signs that the turnover situation should improve, but the most notable factor may be the renewed sense of team chemistry. Junior forward Logan Battle has observed an increase in enthusiasm.

“We have a lot more energy than we are used to. It’s a lot different than the last two years,”  Battle said.

Fellow junior forward Dominique Vitalis relishes in the fresh mindset of Adair. She said that Adair’s priorities are, “energy, attention to detail and communication.”

With a  focused group and an experienced sophomore class, the Hoyas should be able to reduce their turnovers.  Eliminating giveaways should take pressure off the defense, as fewer turnovers equate to fewer scoring chances and fast-break opportunities for opponents.

Although last year’s 11-21 record, including a 4-14 Big East mark, was disappointing, it does not tell the whole story. The Hoyas’ defense was stout for much of the year, outrebounding their opponents by an average of 8.3 boards a game and holding opponents to 37 percent shooting. Butler and graduated senior forward Andrea White may have accounted for approximately half of the rebounding output, but the team holistically knows what it takes to play aggressive defense and refuse opponents second chances. In this regard, Adair doesn’t plan to deviate from the team’s defensive strengths.

“I love defense. We will press full court, we will press half court, we will cause duress when we can. We’re starting to implement a lot of those systems, and the players are seeing it work, and they’re getting excited about it,” Adair said.

From the players’ perspective, Adair’s systems and love for defense translates into one idea: “Run,” Vitalis said.
A team that can use hustle and speed to turn effective defense into better offensive chances should make this team exciting to watch.

It will probably take a while for the on-court chemistry to truly develop. There is no substitute for live experience, something this team lacks. However, looking forward, there is a great deal to be optimistic about. The absence of seniors means that, barring transfers, the team will remain intact throughout the 2015-2016 season and the minutes played by the freshmen this year could reap tremendous dividends in the future.

“The goal is to win a Big East championship,” she said.

While this goal is highly unlikely this season, as the Hoyas are projected to finish eighth out of 10 teams in the conference by the Big East Preseason Coaches Poll, it is clear that the Hoyas have many positive pieces coming together and will be a motivated team going forward.

The road to success in the Big East undoubtedly goes through DePaul. At the annual Big East Media Day on Oct. 22 in New York City, DePaul was picked to repeat as conference champions and the Blue Demons return all but one of their starters from last season’s Sweet 16 run.

The Jan. 4 matchup against DePaul will be the first true in-conference measuring stick for a rejuvenated and rebranded Hoya team, pitting DePaul’s top-notch offense against Adair’s defense. Last year, DePaul led the Big East in scoring by averaging 83.5 points per game and nearly 20 assists per game. This game should especially test the wing and perimeter defense of the Hoyas because of DePaul’s propensity to take three-point shots.

The other toughest Big East challenges will come from Villanova and St. John’s. The Red Storm were picked to finish second in the preseason poll, but last year’s struggling Hoyas were able to beat St. John’s in arguably their most impressive win of the season. Somewhat ironically, St. John’s and Villanova emulate the style of play Adair wishes to instill at Georgetown. Villanova had the fewest turnovers of any team in the country at 8.8 per game and both Villanova and St. John’s played the best defense in the Big East by allowing 58.4 and 62.1 points per game, respectively, far better than Georgetown’s average of 69.7 points allowed per game.

Outside of the Big East, the Hoyas will have several prime opportunities to rebuild their reputation on the national scale. The biggest out-of-conference test is a matchup with the Florida Gators on Nov. 28. The Gators advanced to the second round of the NCAA Tournament last season and can provide the Hoyas with an early-season opportunity to turn some heads and build momentum at home. The Hoyas will face off against two other major conference teams in Alabama and Kansas at the Naismith Basketball Hall of Fame Women’s Challenge in Lawrence, Kan.

For all of its promise, this team is still a young one and for all of the long-term excitement, it is vital to keep expectations within reason. As the season progresses and the off-court chemistry develops into on-court synchronization, expect a better, more disciplined team that should win its share of conference games and rise in the Big East standings. If cohesion occurs sooner than expected and the Hoyas can spring some upsets and finish with a winning record in a weaker Big East, there could be an NIT berth waiting at the end of the season.

Last season was filled with some highs and many lows, but the future of Georgetown women’s basketball looks stable and bright, especially in the minds of both players and coaches.

McCormick summed up the team’s mindset. “We’re not focusing on the past, we’re looking toward the future,” she said.