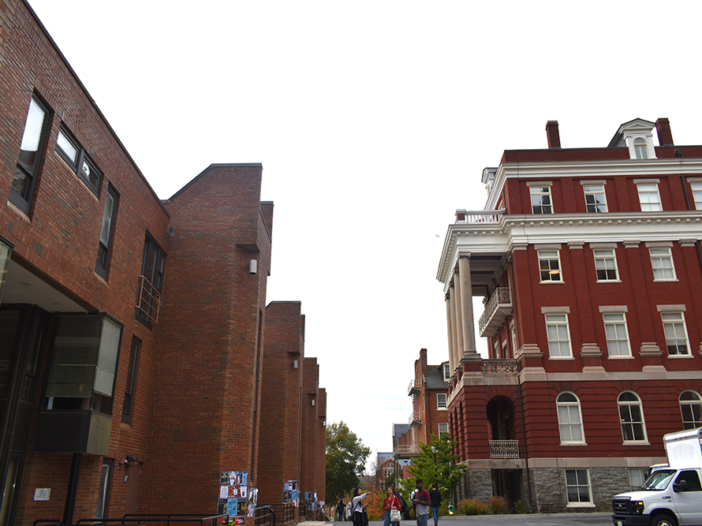 New student Andrii Sendziuk (MSB ’24) is living on campus for the first time this virtual semester. Like many other students on campus, Sendziuk feels like he is having a difficult time connecting with other students. He is still trying to make the best of his time at Georgetown, however.

After Georgetown University announced its plans for a virtual semester, the university permitted a limited number of students to live on campus. Sendziuk is just one of about 500 students who were approved to live on campus because of extenuating circumstances such as housing instability, academic requirements or being a first-year F-1 visa holder.

Sendziuk, an international student from Ukraine, was granted housing as a first-year F-1 visa holder.

“Although being on campus is definitely not feeling like the college experience I’d heard about before, I feel lucky to be on campus,” Sendziuk said in an interview with The Hoya.

Despite positive aspects of campus life, students on campus have had to navigate an intrusive housing application process, socialize under social distancing rules and preserve their mental health under the stress of online coursework during this unconventional semester.

Students who requested to live on campus out of necessity were asked to complete the Housing Stability Application. The application put forth a list of conditions to qualify for housing as well as an opportunity for students to explain their personal situations. With the high stakes of housing at hand and the personal nature of the application, students found the application process burdensome.

Not all students who applied for on-campus housing were accepted, despite meeting the conditions listed in the housing application, according to Rose Dallimore (SFS ’22), who is living on campus.

“It felt like you had to prove how traumatic your situation is because I know a lot of students got rejected,” Dallimore said in an interview with The Hoya.

Some students who pursued on-campus housing found themselves in unstable housing situations, lacking resources or private space to succeed in online school. The details of students’ home lives and why they needed to get away from them were extremely personal and difficult to divulge to a total stranger, according to Leo Teixeira (COL ’21), Audrey Wills (SFS ’23) and Cheyenne Martin (COL ’21).

In the application, Teixeira felt compelled to recount his trauma to secure an adequate living space.

“It basically required needing to confront and lay bare a lot of the trauma and personal issues that resulted in my home not being the best environment for me,” Teixeira said in an interview with The Hoya. “Knowing what was at stake — having a safe and adequate place to complete the semester — definitely added a lot of pressure as well.”

Wills and Martin, who were rejected from the first round of on-campus housing applications, had to go through the appeals process and share more than they were willing to be approved.

“The application said, ‘Share as much as you’re comfortable with,’ so I shared some things, but didn’t say as much as I should have,” Wills said in an interview with The Hoya. “They said that you could appeal and include things you didn’t include before, so I told them everything about my situation to see if it made a difference.”

Wills was then accepted to on-campus housing.

As a senior, Martin’s graduation depended on her securing on-campus housing, so she felt compelled to share deeply personal stories.

“I was rejected the first time even though I told them I couldn’t graduate unless I was here,” Martin wrote in an email to The Hoya. “I had to beg and plead with them to reconsider, even going to several different deans and spilling my guts about extremely personal issues.”

Upon their arrival on campus, students approved for housing had to quarantine for two weeks. Confined in their apartments alone or with one other roommate, students on campus have discovered different ways to cope and take care of themselves while isolating.

Though no one was monitoring students to ensure they stayed in their dorms, students under quarantine had badges that were designated as “red” in the One Medical app, an app through which students schedule COVID-19 testing and track their health status.

Students under this designation could not swipe into the dining hall, the library or other campus buildings. After quarantining, student badges can still turn red if the student does not get tested twice a week, if they have not filled out the COVID-19 Daily Check-in or if they test positive for the virus, according to Dallimore.

Wills was grateful that her roommate had to quarantine as well, so she was not alone. While Dallimore and Syed Chapman (COL ’22) do live alone, both found ways to stay sane during those first two weeks.

“I live on the rooftop, so people would come and bring their own chair and sit outside six feet away from my door, and I’d have my door open and talk to them,” Dallimore said.

Even when not under quarantine, Georgetown’s social distancing requirements mean students must wear masks at all times while outside of their own residence and students cannot gather in groups larger than 10. Additionally, only students approved to live on campus can enter other on-campus residences.

For Melanie Cruz-Morales (COL ’22), a junior transfer student on campus, and Sendziuk, this semester is their first opportunity to socialize with other Hoyas. Cruz-Morales is grateful to have met a group of friends through the on-campus network.

“At times it can get lonely,” Cruz-Morales said in an interview with The Hoya. “Everyone has so much work during the week and is on the grind, but on the weekends I get to meet and hang around with people on campus. That’s all we can really do, but it’s so much better than nothing.”

With classes being online, Sendziuk found it more difficult to connect with other new students, but he is grateful to be able to meet some freshmen in person.

“I don’t think it is even about making new friends and being confident to start conversations, but about finding ways to meet people,” Sendziuk said. “Having classes on Zoom, not being able to have meals with other students and handling most of my communication online have all left me with very few options on how to meet people in-person. Luckily, I have managed to connect with a few co-years online and later grab a coffee with them which was amazing.”

Wills and Mia Balabanis (COL ’22) are grateful they are rooming with friends to cope with the isolation. However, the social scene still feels inadequate, according to Balabanis.

“I wish I saw more of my friends,” Balabanis said in an interview with The Hoya. “I think everyone, both on and off campus, is feeling the dip in socializing. At least speaking for myself, I feel socially deprived.”

Despite the difficulties of social isolation, Martin is still mostly staying inside and taking precautions to protect herself from COVID-19.

“There are still parties happening all over the place. I had to break one up myself, and I’ve reported on several more,” Martin said. “People aren’t wearing masks. I don’t trust anyone, so I just stay inside and keep to myself.”

Though, as a senior, Teixeira has many friends living in the Georgetown neighborhood, he has also mostly been isolating to stay safe.

“I’m fortunate that many of my friends are living around campus, but aside from a few individuals, I’ve been preferring not to see people, and I haven’t really felt comfortable being as social and meeting new people,” he said.

While some students on campus are taking serious precautions, the university identified a cluster of seven student infections during the week of Sept. 13 to Sept. 19. When Chapman heard about this cluster of cases on campus, he was not surprised that some people did not consider the disproportionate effects on marginalized communities.

“People are going to be deviant and not follow protocols in place for their own personal pleasure and joy, not recognizing their actions are contributing to the fact that this pandemic is racist and impacts marginalized people greater,” Chapman said.

In addition to the stress of living through a pandemic and feelings of isolation, on-campus students, like their other peers, still face anxiety about completing their coursework, all of which affect mental health.

Constantly being on Zoom and having to respond to online communications becomes exhausting over time, according to Cruz-Morales.

“The Zoom fatigue is definitely real,” Cruz-Morales said. “You have to constantly be checking Google calendar and your emails every second of the day, and even though it’s little small acts, the energy that they take up in your mind becomes so exhausting.”

As a senior, Martin not only has coursework but also a work-study job, two internships and extracurriculars, all while searching for a post-graduation job.

“Being a senior is weird because I feel like my classes have given us more work since they think we’re at home and able to do all of it, but that’s not true,” Martin said. “I feel like I’m in a tsunami of obligation with nowhere to go.”

While he is disappointed that his senior year has been significantly affected by the pandemic, Teixeira is nevertheless grateful for his time at Georgetown.

“It’s definitely really sad to have to deal with these circumstances for any portion of my senior year, especially when reflecting on what a great experience the past three years have been,” Teixeira said.