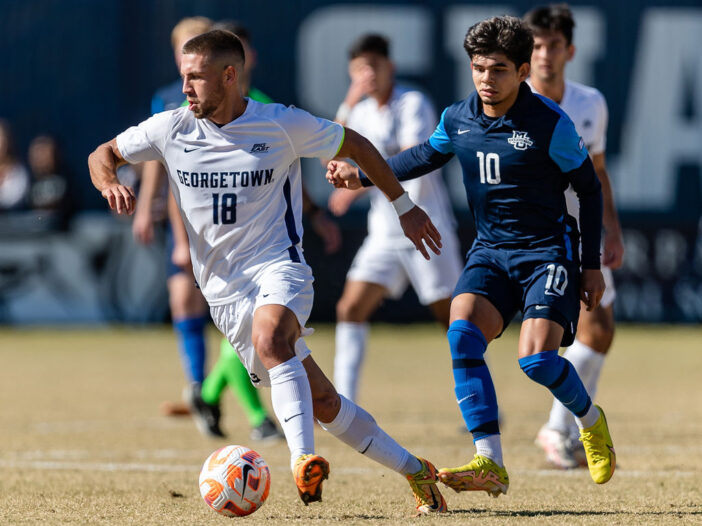 The Hoyas could not have asked for a better afternoon for their last home match of 2022 with the pitch bright and crisp ahead of the 1 p.m. kickoff. Nearly 800 fans crowded the stands at Shaw Field on Oct. 29 for the final leg of a three-game homestand after Georgetown trounced Seton Hall and Xavier over the previous two weeks.

After the game, Georgetown Head Coach Brian Wiese said the win was due in part to the team’s effort to improve throughout the season.

“Certainly for this year with how slow the team started from a results point of view, they really handled the ups and downs of that,” Wiese said in a postgame interview with The Hoya. “Players that know how to win, how to succeed, and they’ve really been an unbelievable guiding light for the young guys.”

Senior Day festivities preceded the day’s action, with flowers and photos to celebrate the careers of Georgetown midfielder Aidan Rocha, defender Daniel Wu and goalkeeper Jordan Wells. The seniors’ remarkable run on the Hilltop has included a cumulative record of 57-10-9 and an NCAA Division I National Championship in 2019.

Although it was Senior Day, it would not take long for the next generation of Hoya stars to make their presence felt. The Golden Eagles came out swinging in the 13th minute, when Marquette forward Beto Soto collected the ball at the top of the goal box, spun quickly, and rocketed a shot towards the upper left of the net.

Georgetown junior goalkeeper Ryan Schewe was there, however, with outstretched arms to make the snag. His save sparked a fast break that culminated with Hoyas first-year midfielder Jack Panayotou dishing a pass from the endline back to sophomore midfielder Blaine Mabie. The sophomore powered a grounder past Marquette keeper Ludvig Målberg to lift Georgetown to a 1-0 advantage, which the Hoyas maintained for the rest of the match.

Schewe’s 3-save performance paced a Georgetown defensive effort that recorded its third consecutive shutout. Schewe, the reigning United Soccer Coaches’ National Player of the Week, was aided by a Hoya backline that frequently found itself scrambling to stifle potent Marquette attacks in the box, including a pivotal stop on a 17th-minute Marquette corner kick and an outstanding block by Georgetown sophomore defender Kieran Sargeant six minutes later.

Wiese said while he appreciated the grit his team showed, there was room for improvement.

“You could argue it was one of our poorest performances and you have to give Marquette a ton of credit,” Wiese said. “But we had five guys who blocked shots today, and sometimes that’s how you win games. It’s not about connecting 15 passes and scoring a great goal and doing upper corners, it’s about putting your body in front of a shot to keep a shutout.”

The Golden Eagles’ best opportunity for an equalizer came in the 26th minute, when Marquette forward Brooklyn Merl split two Hoya defenders with a pass to streaking forward Abdoul Karim Pare. Faced with a wide-open lower corner of the net, Pare’s shot attempt clanked off the right goalpost and rolled away, earning a collective sigh of relief from the home crowd.

A hard-fought second half yielded several more near misses for both sides, with the two teams combining for 18 shots over the last 45 minutes of play. However, the sound of the final buzzer found Georgetown possessing a victory and the Big East regular season championship trophy, which the Hoyas lifted in jubilation.

Despite having the conference title locked up, Wiese said the stakes for the Hoyas’ regular season finale against the University of Connecticut Huskies remain as high as ever.

“It’s going to require us to be really good and really sharp on the day, which is what you want,” Wiese said. “We’re trying to put ourselves in a position to get an NCAA at-large bid, regardless of whether we win the league or not, and going on the road to UConn and trying to get a result there is hugely important for that goal.”