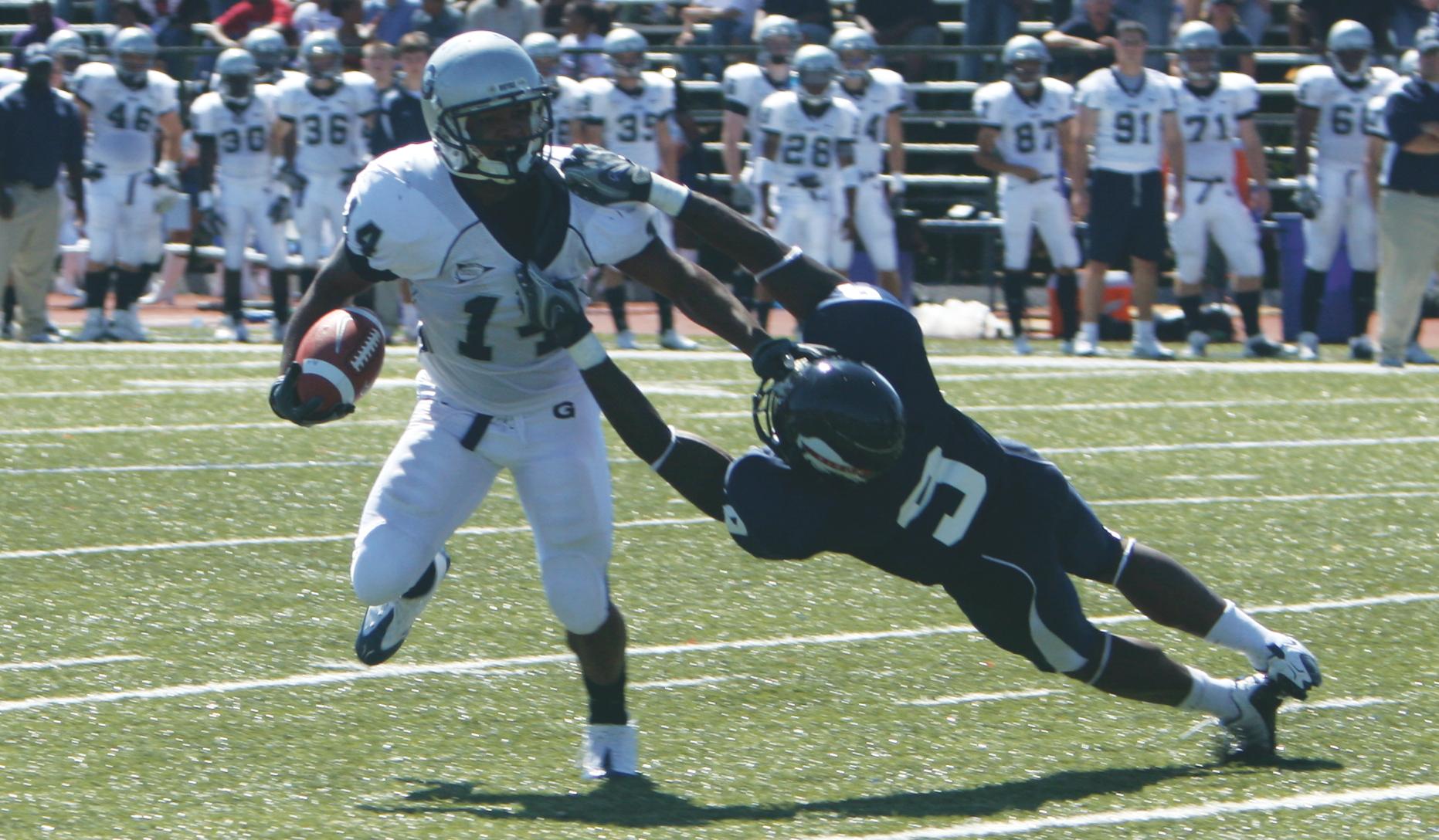 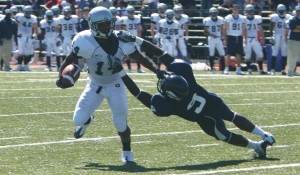 On a summery Sunday afternoon on the campus of Howard University, Georgetown’s third season under Head Coach Kevin Kelly began with a refreshing air of optimism as clean and clear as the all-white road uniforms the Hoyas were sporting.

A turnover on the opening kickoff gave the Bison excellent field position to start, but on a fourth and two with 13:15 remaining in the first quarter, the defensive line collapsed around the quarterback, and junior defensive back Dennis Jackson broke up a short slant pass.

In a play, the 2008 Hoyas showed why a new season provides fresh hope. Behind a dangerous two-quarterback attack and a revitalized defensive line, Georgetown seized the inaugural D.C. Cup 12-7 with a resilient comeback performance at Greene Stadium. The game was postponed on Saturday due to Tropical Storm Hanna.

“They kept scratching and clawing,” Kelly said of his team. “This game could have gone either way. Howard played an excellent football game as well; we just made a couple of plays done the line to win the game.”

The combination of freshman James Brady’s strong and accurate arm and sophomore Keerome Lawrence’s quick feet held the Bison at bay and proved just enough, despite the fact that Howard had more first downs (15 to 11) and amassed a greater number of rushing (98 to 96) and passing yards (183 to 137).

The play of the game occurred early in the fourth quarter when a poised Brady fired a 31-yard touchdown to a sprinting senior Kenny Mitchell on a fly pattern.

The score came on the heels of a crucial fourth-down conversion, when Lawrence was stopped short of the marker but picked up the first down when Howard was whistled for a 15-yard facemask call. Penalties were a problem for each team; both Georgetown and Howard racked up seven each for more than 100 yards total.

The real star of the day proved to be a ball-hawking Georgetown defense that collected three fumbles, one interception and four sacks. The veteran defensive line, composed of senior ends Ataefiok Etukeren and Travis Zorrilla, senior tackle Anthony DiTommaso and junior end Chudi Obianwu, applied constant pressure and made themselves a home in Howard’s backfield.

“Up front, they played great today. They just dominated the ball,” junior defensive back Chris Rau said. “Once you get that pressure up front it makes the whole defense click.”

It was generally of tale of two halves for Hoyas. Howard got on the board first with 7:55 remaining in the first quarter after junior Floyd Haigler connected with freshman wide receiver Willie Carter on a five-yard fade in the right corner of the end zone, and it appeared the Bison would have little trouble cutting through Georgetown’s defense.

Lawrence was sloppy in the early going, fumbling three snaps, and Kelly turned to the rookie Brady with 3:47 remaining in the first quarter. Kelly said before the game and after as well that he planned to switch between quarterbacks, as Lawrence is a good runner and Brady a good passer.

On his first possession, Brady was sacked for a nine-yard loss on second down, and it appeared that the Hoya offense could do very little but move backwards. They accounted for just nine yards in the first quarter.

The second quarter saw the defense inflict its will upon Howard when senior linebacker Nicholas Umar tallied the team’s third sack of the day with 11:45 to go in the half. Momentum was beginning to shift.

Another game-changing moment occurred when sophomore Paul Sant’Ambrogio plucked a batted ball from the air and drew an unsportsmanlike penalty from Howard on the return to give the Hoyas good field position.

“[I am] looking at it as a game of miscues. You can’t turn the ball over. I don’t care who you play, you can’t turn over the ball five times,” Howard Head Coach Carey Bailey said. “Georgetown did a great job. They were prepared, they knew what we do, and they did a great job shutting down our offense.”

The ensuing drive would result in the Hoyas’ first score of the season, a 19-yard field goal from sophomore Casey Dobyns. Dobyns would later miss the extra point on Mitchell’s touchdown, but redeem himself by nailing a 30-yard field goal with 3:03 left in the fourth quarter.

Some late-game excitement was provided when an unintentional onside kick from sophomore Jose-Pablo Buerba was recovered by the Hoyas. Buerba’s kick sailed 40 yards downfield and towards the sideline, and when it hit the ground bounced back toward the Hoyas’ coverage team racing down the field. The ensuing drive did not yield any points.

With 1:30 remaining, the Bison took over and moved downfield on Georgetown’s prevent defense. A bobbled snap by Haigler was recovered by senior defensive back Chris Parker to seal the victory for Georgetown with 42 seconds left.

Georgetown resumes action next Saturday when the Blue and Gray battle the Lafayette Leopards. Game time is 6 p.m. in Easton, Pa.

“We’ve got a tough game coming up this week,” Kelly said. “It’ll give us a real good test in terms of our league play.”