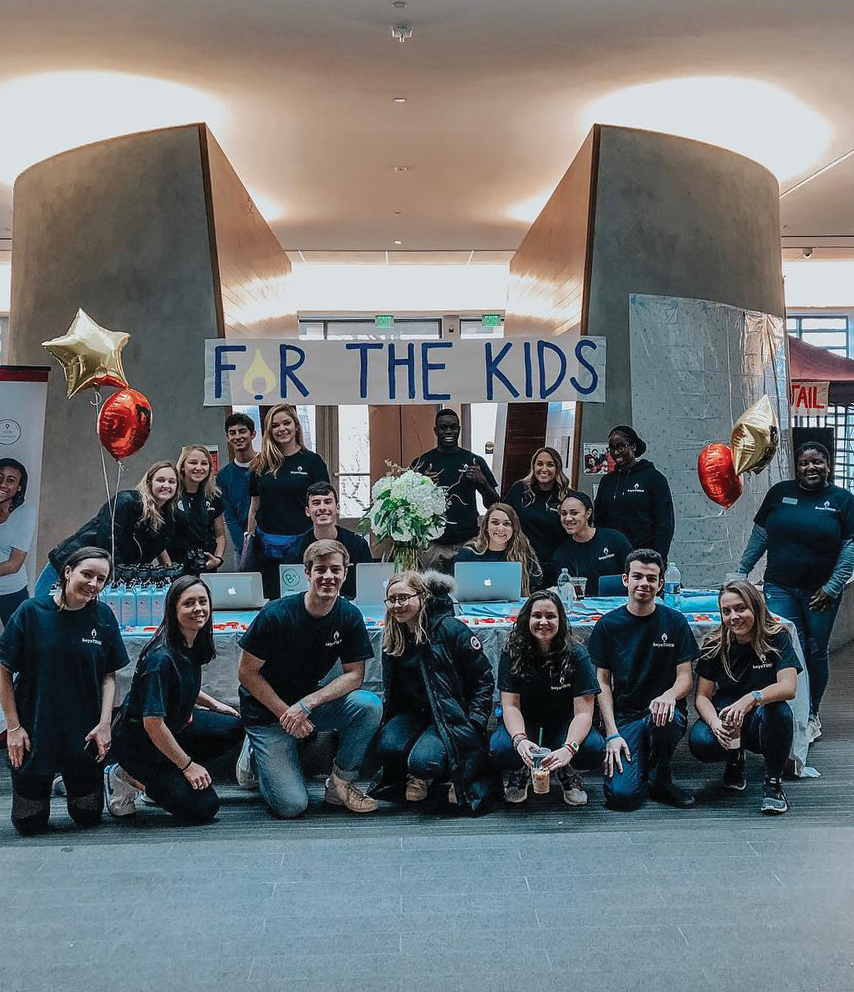 HoyaTHON, Georgetown’s chapter of the Miracle Network Dance Marathon that fundraises for Children’s National Health System, a hospital in Washington, D.C., became the largest first-year dance marathon in D.C. and set the record for day-of fundraising for all first-year programs at Children’s National.

Student participants at HoyaTHON stood or danced for 12 hours on Saturday. Several student groups performed throughout the day, and 151 Georgetown students attended, according to co-directors Hanna Dohmen (SFS ’20) and Callia Karas (COL ’20).

The group raised $41,024 overall, and participants raised $11,965 in online donations during the event in the Healey Family Student Center Great Room. The group collected donations through sponsorships of individual dancers and smaller fundraising initiatives in collaboration with student organizations in the Center for Social Justice, the Student Activities Commission, and local businesses like Chipotle and South Block.

Whitney Maddox (GRD ’11), the Center for Social Justice staff adviser to HoyaTHON, attributed the event’s fundraising success to these collaborations.

“They had a combination of reaching out to student organizations on campus, some of which were through the Center for Social Justice and some of which were through SAC, but also through businesses,” Maddox said. “Once we started talking about it and getting it out there, we saw student organizations giving literally up until the last second of the night.”

The last dance marathon hosted at Georgetown was in 2010 and raised about $8,500 for Children’s National. Holding a dance marathon had been a longtime goal for Karas, which is why she and Dohmen decided to start a new group in place of the former Hoyathon to bring back the event, according to Karas.

“I just thought that I would do it when I went to college because it was for such a good cause,” Karas said. “It really just brings the entire university together on so many college campuses in a way that I’ve never seen anywhere else.”

The funds raised at HoyaTHON will have a significant effect on patients at the hospital, according to Children’s National President and CEO Dr. Kurt Newman.

“The incredible passion and commitment of the HoyaTHON team and Georgetown University students this past weekend helps make a major impact for the 230,000 kids treated each year at Children’s National,” Newman wrote in a statement to The Hoya.

The funds from HoyaTHON will go toward medical professionals and medical equipment tailored for children, Newman said.

“Thanks to partners like Dance Marathon, we are able to give children a supportive environment with kid-sized MRI machines, child life specialists who teach little ones about their procedures, and doctors, nurses, and researchers on the cutting-edge of the future of medicine,” Newman wrote. “I’m inspired by this generation of students supporting the health and well-being of future generations.”

HoyaTHON did not have official club status at the time of the event, which became a significant obstacle in planning, Dohmen said.

“We didn’t have a club in the CSJ, and so everything was on a very week-by-week basis, and it was hard to see even three weeks ahead,” Dohmen said.

However, the CSJ Advisory Board for Student Organizations officially approved HoyaTHON’s club status Wednesday, according to Dohmen.

HoyaTHON managed to maintain a positive and upbeat atmosphere for participants even as the hours wore on, attendee Juliet FitzPatrick (SFS ’21) said.

“Everyone seemed to feel really happy to be there, like they were doing something for the kids,” FitzPatrick said. “It was a really great environment. Everyone seemed really jazzed.”

“Everyone in the group came and watched us dance. It was a lot more relaxed than the other performances that we’ve been doing because it was more human interaction with the audience because we were right next to them,” Kleier said. “It was just a fun environment — we were all laughing and having fun.”

Karas said she hopes that following the success of HoyaTHON’s first event, the group will attract more members and donations in the coming years.

“We’re hoping to grow and we’re hoping that next year is a lot easier considering that now people actually know who we are on campus,” Karas said. “Getting people to sign up for something and pay 15 dollars for something that they don’t even know what it is was obviously really hard this this year. But people had a lot of fun, and I actually think they will come back next year.”