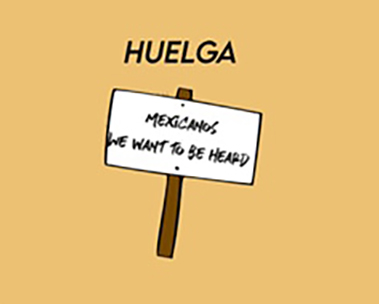 After spending three days in the Houston library archives, watching hours of film and reviewing 4000 pictures of newspaper clippings, manifestos and letters, Catherine Shonack (COL ’22) was ready to tell the story of the Huelga schools.

The Georgetown University Mask and Bauble Dramatic Society’s play “Huelga!” tells the story of a group of Latinx advocates’ fight for recognition as a minority group in Houston, alongside two other productions in its annual Donn B. Murphy One Acts Festival on April 7.

The production was written by Shonack, who first read about the Huelga schools in a history class in the fall of 2020 and decided to go to Houston to do further research for the play in December 2021.

Shonack said the show covers the advocates’ efforts to secure a better education for Mexican American students in Houston.

“It’s really centered on the activists doing the best that they can to fight for the education that they think their kids and their community deserve,” Shonack told The Hoya. “They’re seeing that the school district is taking advantage of the fact that some Mexican Americans have white skin and had fought to be white previously to force unequal integration in the schools and pair disadvantaged communities together as opposed to giving kids the chance for equal education.”

Maggie Cammaroto (COL ’22), director of “Huelga!,” said viewers can expect singing, dancing and a staged reading of firsthand accounts by the activists.

Shonack and Cammaroto prioritized including students who identified as Latinx in “Huelga!” While the original version of the show had seven Latinx characters, only three Latinx-identifying actors auditioned, with just two opting to stay as part of the cast. As a result, Cammaroto and Shonack decided to restructure the script around the Latinx actors that they had on board.

Cammaroto said that “Huelga!” now takes the form of a reading set in a modern school.

“I actually appear on stage as a professor in the very beginning and the very end saying, ‘We’re going to learn about Huelga schools today. Open your books up, and we’re going to be reading firsthand accounts of what happened,’” Cammaroto told The Hoya.

“Because Georgetown is a PWI, it is hard already to find Latinx people, and then to find the subset within the subset, like Latinx people who like theater, who are willing to give that type of time commitment, is even harder,” Olea Tapia told The Hoya. “There were even talks about possibly not doing ‘Huelga!,’ but we truly believe that telling these stories is fundamental.”

The change forced the cast to start from scratch after learning choreography and scenes that would no longer be included, but Cammaroto said it was necessary to preserve the authenticity of the history.

“I knew that was the right decision and that would be in the service of the story,” Cammaroto said. “It’s been quite a journey — I’ve had to switch things around and the cast has been so patient and resilient through all of that, and I think it’s finally starting to feel like we’re comfortable with the material.”

Shonack said having Latinx-identifying actors play the advocates was essential, even if that meant having to cut some characters.

“As a writer, it’s always difficult to get rid of characters — I feel like after doing all the research and reading about their lives and experiences I got to know them so well, so to pick and choose between them, it feels like picking and choosing between your kids,” Shonack said. “I think for me, having people of Mexican American heritage or Latino heritage playing these characters was something that was really important to me.”

Olea Tapia said the production is important for the representation of Latinx people in theater.

“Next time, more people will show up because they will see themselves represented in the stories we tell,” Olea Tapia said. “Continuing to tell these stories is hugely, hugely important.”

Shonack said she is excited for the community to see a show that features Latinx actors and tells Latinx stories.

“I think in my time at Georgetown, I’ve never seen a play that really starred Latina actors,” Shonack said. “I’m just excited for everyone to see the story and really feel the passion and the struggles that these activists faced. It’s these people going out there, everyday people doing what they believe is best for their future because they didn’t get the same opportunities as other people do. And I just really hope that their story resonates with people that come and see it.”