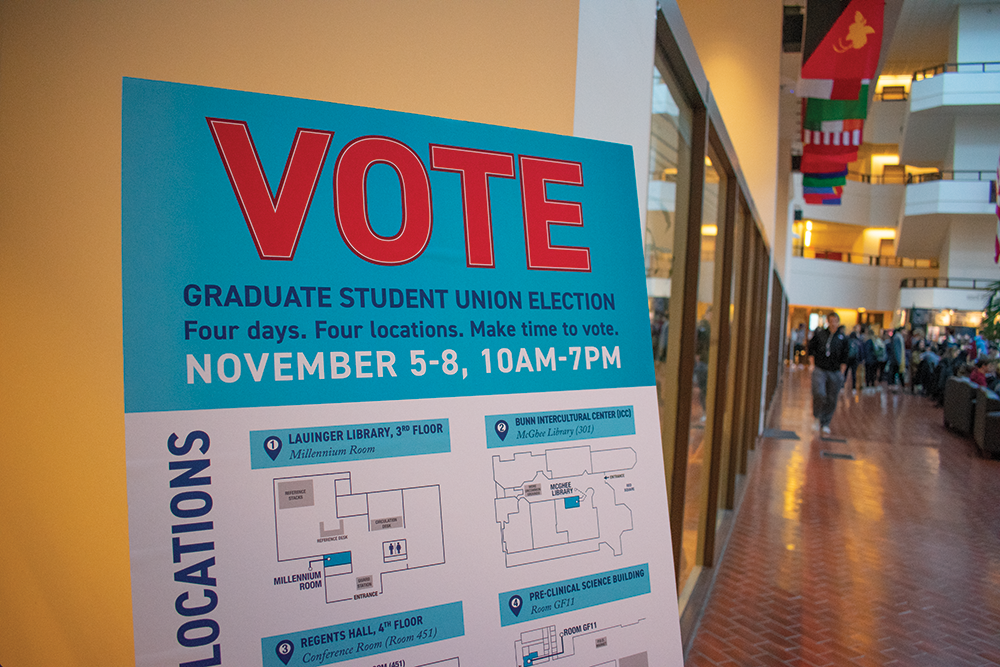 Hundreds of Georgetown University graduate student workers voted this week on whether the university will recognize the Georgetown Alliance of Graduate Employees as a union, allowing it to engage in collective bargaining with the university.

Results are set to be announced Friday morning: Official counting begins at 9 a.m. in New North 204.

The American Arbitration Association, a neutral third-party organization, moderated the election, which began Nov. 5 and ended on the evening of Nov. 8. GAGE filed for election with the AAA on Oct. 8, after a yearlong push to receive official recognition from the university as a union.

GAGE is affiliated with the American Federation of Teachers, a national union that represents 1.7 million members from over 3,000 affiliates. If a majority of the students who vote support unionization, GAGE and AFT will become the sole collective bargaining agents for all graduate students at the university.

GAGE would then be able to negotiate stipend amounts, wage rates, benefits, hours and similar matters for graduate student workers, according to the April 2 agreement between GAGE and the university.

All graduate research assistants, as well as graduate teaching assistants and doctoral teaching associates, were eligible to vote in the election. Graduate students were able to vote at four polling locations in Regents Hall, the Intercultural Center, Lauinger Library and the Preclinical Science Building.

Polling stations remained open from 10 a.m. to 7 p.m. throughout the four days of voting, and poll observers from GAGE were present to help ensure fairness, according to Sarah Fisher, a GAGE member and third-year doctoral candidate who works in the government department.

Douglas McRae, a fifth-year doctoral candidate and history department employee who is a member of GAGE, said he was happy to see his peers share similar enthusiasm for the election and for GAGE’s cause.

“Frankly, the past few days have been very exciting — you know, it’s been a long voting time frame, and it’s been just exciting seeing people turn out to vote, seeing people being able to have a say into whether we should form a union or not, and it’s also exciting to see our members turn out,” McRae said. “It’s the culmination of a huge effort, so we’re waiting in anticipation to see the results tomorrow.”

Charlotte Xing (GRD ’19) was happy to have voted in the election and supported the union as she left the polls Thursday afternoon.

“I think it’s quite important to have a union to represent student labor,” Xing said. “I’m excited to be a part of this, and it’s been a pleasure.”

Deidre Nelms, a third-year doctoral candidate and philosophy department employee who is also a member of GAGE, was pleased to see how many people had voted so far.

“It was so exciting to see a huge number of my colleagues come out to vote yes and hold each other accountable for voting this week,” Nelms wrote in an email to The Hoya.

The university remained neutral throughout the election and encouraged all eligible students to vote, regardless of their view on unionization.

GAGE began to pressure the university for the ability to form a union in November 2017.

The university first considered allowing the AAA to oversee a potential vote on whether to grant official recognition to GAGE in January 2018 after receiving a proposal from GAGE and the AFT.

Provost Robert Groves wrote in a Jan. 9 email that the university would accept an election moderated by the AAA rather than the National Labor Relations Board, which usually oversees union elections in the United States, because of the NLRB’s current categorization of graduate teaching assistants as university employees.

The university initially declined to recognize GAGE as a union because it considers graduate student workers primarily as students, not as employees.

This sentiment has been voiced by multiple prominent U.S. universities as they reflect on their relationships with their student workers.

Stand Up for Graduate Student Employees, Brown’s would-be union for its graduate student workers pending a formal vote, also filed for election with the AAA, rather than the NLRB, according to an Oct. 11 AFT news release. Its election is set to begin Nov. 14 and conclude Nov. 16.

AFT President Randi Weingarten praised Georgetown for its willingness to find alternative means to cooperate with its graduate student workers in the Oct. 11 news release.

“Both schools are on the road of long-lasting partnership with the employees who conduct the research, teach the classes and grade the papers that make their schools run, and we trust their commitment to democracy will not falter as the elections draw near,” Weingarten said.

Several universities have also recently sought private recognition as unions from their universities, rather than through the NLRB.

Graduate student worker unions from both the University of Chicago and Yale University withdrew their recognition petitions in February 2018 out of fear of a possible overturn of the 2016 NLRB ruling that classified graduate student workers as employees of the university. With a private agreement directly with the universities, unions will retain recognition even if the 2016 ruling were overturned, according to a spokesperson from Georgetown.

Though the university has upheld its promise to hold the election, students should not forget the effort it took to get to this point, according to workers’ rights advocacy group Georgetown Solidarity Committee member Logan Arkema (COL ’20).