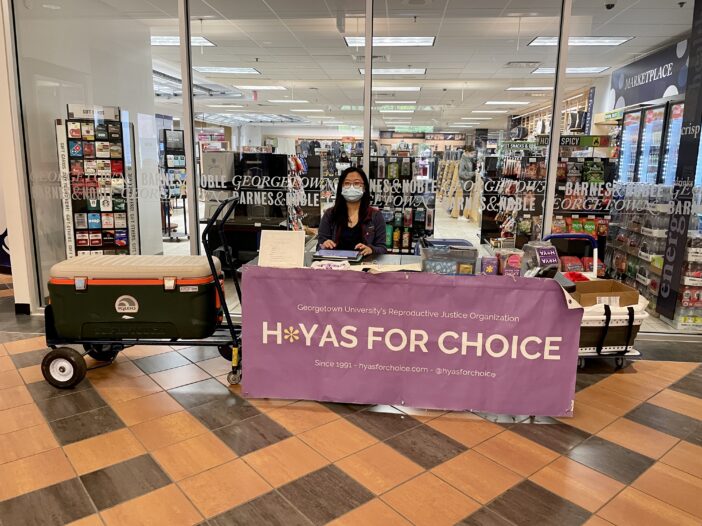 H*yas for Choice (HFC) celebrated 30 years of advocacy work fighting for reproductive justice and sex positivity on campus with a week of events and fundraising efforts.

The organization, a pro-abortion rights student group, hosted a series of events beginning April 25 to celebrate the group’s work throughout the past three decades. Celebrations included an event recounting the history of the club, a birth control panel featuring an obstetrician-gynecologist and a tabling event where HFC members distributed condoms with slogans riffing on classic Georgetown phrases, such as “H*YA SEX~A” and “MEN AND WOMEN FOR OTHERS’ PLEASURE.”

James Moran (COL ’25) tabled for HFC this week and said he has appreciated getting to learn about the group’s past.

“I enjoy the history — we’re able to read and understand the importance of what we do and we feel appreciated, and I think that’s really nice,” Moran told The Hoya.

Since it’s founding in 1991, HFC has pushed to expand access to quality reproductive and sexual health services on campus, according to HFC President Chloe Kekedjian (COL ’22).

“In the past 30 years, we have provided condoms to the student body through tabling and delivery,” Kekedjian wrote to The Hoya. “We have also pushed the University to continue to cover birth control on University health insurance, and not take the religious exemption under Obamacare. We have delivered free emergency contraceptives to students on campus for 5 years now.”

As a Jesuit university, Georgetown does not provide many sexual health resources to students, including condoms and other contraceptives. As a result, HFC is one of the only sources for students to access condoms, lube and Plan B.

HFC Co-Director of Organization and Advocacy Lauryn Ping (COL ’23) said the week of celebrations are meant to both advocate for sex positivity and continue the fight for reproductive justice.

Ping said throughout the week, students can stop by the HFC tables for fun sexual health activities and Georgetown Day-themed condoms. According to Emmie Meisel (COL ’25), who helps table for HFC, promoting sexual positivity in this way enables the organization to reach a wider audience.

“Specialty condoms get people excited about safe sex and draw people to the h*yas for choice tables, which further exposes them to all of the other things we have to offer,” Meisel wrote to The Hoya. “It can be a bit awkward to go up to the table and take condoms normally, so the special ones make it more approachable.”

HFC communications director Serena Barish (COL ’25) said she attended the birth control panel to learn more about how the drug can affect her body.

“I think that it is often very difficult to learn sufficient information about birth control because it is rarely discussed openly in our society,” Barish wrote in an email to The Hoya. “As someone who has tried multiple forms of birth control, I was hoping to both learn more and potentially help others to learn from my experience.”

Kekedjian said HFC has also worked to improve menstrual equity and advance women’s rights on campus throughout the past 30 years, with this year’s festivities serving as a moment to recognize such efforts.

“We have worked with the university and the maintenance department to expand access to sanitary products on campus to ensure menstrual equity, and have committed the university to converting the Women and Gender Studies program into a department,” Kekedjian wrote.

Students have raised concerns in the past about the lack of access to menstruation products on campus, with a 2019 report from the Office of Planning of Facilities Management to HFC revealing that only 15 of Georgetown’s 43 academic buildings provide menstrual products in bathrooms. The Expanding Student Access to Period Products Act of 2021, passed by the D.C. Council on Jan. 4, now requires that all schools provide free period products in women’s and gender-neutral bathrooms.

In 2016, HFC co-sponsored an event hosted by the Georgetown University Lecture Fund in which Cecile Richards, who was the president of Planned Parenthood at the time, spoke about abortion rights and access to contraceptives.

While HFC has accomplished many things in its time as an organization, Kekedjian said there is still important work to be done to fight for reproductive rights and sex positivity on campus.

“We want to expand access to services on campus and continue to push Georgetown to be a better place,” Kekedjian wrote. “We want to work with the student health center to reinstitute STI testing and work on making Georgetown more accomodating for gender non-conforming students on campus. We are also working on expanding our harm reduction services with our Narcan trainings and potentially getting drug testing kits for clubs to check out for parties.”

Barish said that the week of events both honored the history of HFC’s work on campus while acknowledging the murky future of reproductive justice and bodily autonomy in the United States.

“Celebrating the work of this student group means focusing on all of those complicated elements of reproductive justice, with an eye toward a future in which my body remains something I control, regardless of the identities I hold,” Barish wrote.