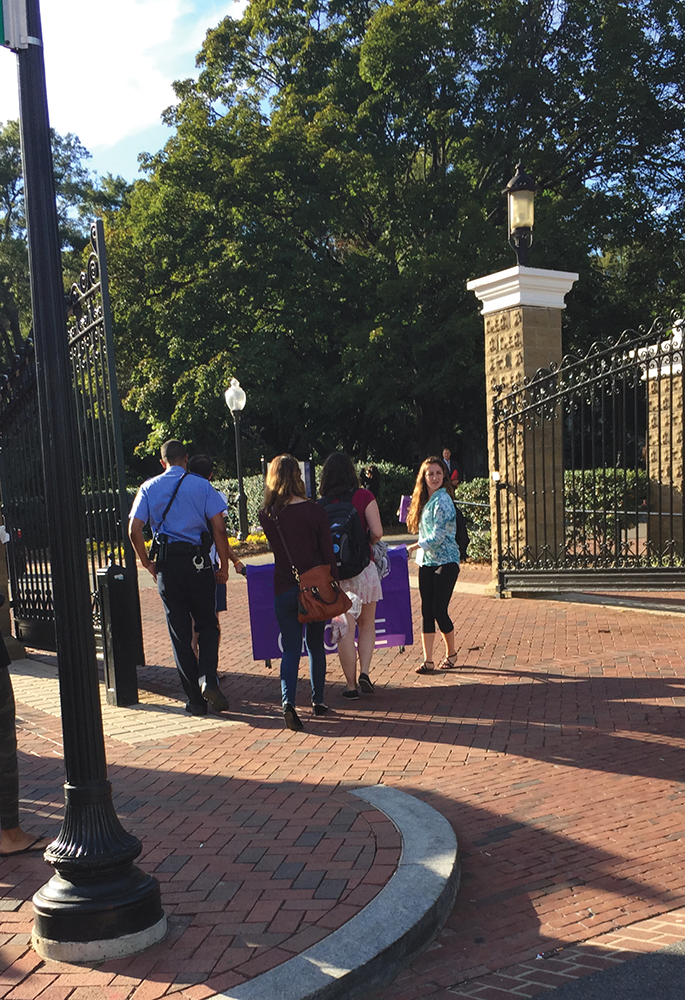 Members of H*yas for Choice were temporarily removed from a previously approved tabling location on 37th Street, just outside of the university’s front gates, by a Georgetown University Police Department officer five minutes after setting up a table on the sidewalk Monday afternoon.

The group decided to table in silent protest of an event occurring in Gaston Hall, in which the university bestowed an honorary degree to Donald Cardinal Wuerl, the Archbishop of Washington. Group members said they oppose Wuerl’s positions on LGBTQ rights and women’s health.

H*yas for Choice, in reaction to the event on campus, decided to table outside of the university gates on a public sidewalk so that event-goers would see them on their way to Gaston Hall. The group was removed during prime foot traffic, about 15 minutes before the ceremony’s start at 5 p.m.

As an unrecognized student group, H*yas for Choice is limited to designated free speech zones when tabling.

H*yas for Choice was allowed to table on 37th Street last year, and were in fact told to table in this exact spot after they were removed from Healy Circle during last year’s Cardinal O’Connor Conference on Life. After 18 minutes in front of Healy Hall, GUPD relocated the group to this same spot just outside the campus gates.

An hour after the removal Monday, the same officer informed the group they could return to their original location on the sidewalk. It is unclear why the group was temporarily barred from tabling on the sidewalk. The university directed requests for comment to GUPD Chief of Police Jay Gruber, who was not available for comment as of press time.

The university’s current speech and expression policy, revised in May, designates spaces such as Red Square, Regents Lawn, the lobby of the Leavey Center and the Healey Family Student Center as free speech zones. A statement from Assistant Dean for Student Engagement Erika Cohen Derr at the start of the semester said that these specific designations allow campus to remain open for expression, but also safe.

“The ‘public square’ designation accommodates the physical materials and structures and also the spontaneous interest in expressing a viewpoint. Georgetown is a dense campus with many thousands of people occupying just over 100 acres,” Cohen Derr wrote in an email to The Hoya. “The designation of public squares also takes into account the need for egress and passage so that people can traverse campus safely, particularly as we enter a phase of heavy construction.”

“We recognize that this is your property, so we’re going to stand on a public sidewalk that, to our knowledge, they do not own, and table there,” Grace said. “By that point, once you leave Georgetown property, the First Amendment applies.”

H*yas for Choice Vice President Vincent DeLaurentis (SFS ‘17)said that a GUPD officer approached the table and asked the group of five students to relocate within five minutes of setting up a table.

“I definitely asked for some more information and justification from him, and after radioing a superior, he told us that it’s a public sidewalk and he was going to have to ask us to leave,” DeLaurentis said.

The officer offered multiple options for relocation, including Red Square, Copley Lawn or the exterior of Lauinger Library. According to DeLaurentis, these spots took the group completely out of the eyesight of those attending the event in Gaston.

“I told him that although we understand that the university free speech policy protects those areas, it’s kind of an ineffective place for us to sit because we’re not going to be able to be seen by anyone and make our point,” DeLaurentis said. “By asking us to move there, Georgetown is paying lip service to free speech without actually protecting real substantive speech.”

According to Grace, this relocation demonstrates the on-and-off compliance with the university’s free speech and expression policy that GUPD has given H*yas for Choice over the past year.

“I think we’ve provided plenty of examples over the past year of them selectively choosing to apply policies that don’t really exist, because they’re not following them, to us,” Grace said. “The thing that’s really angering me right now is that we intentionally went to this spot because last semester when we were tabling in Healy Circle, they asked us to move there. I am dumbfounded why they would ask us to move somewhere in January and then suddenly in September, make it a spot that we’re not allowed to sit anymore.”

With the help of the GUPD officer, the students moved their table to Copley Lawn, where they tabled for an hour, obstructed by a large black gate. After that time passed, the same officer approached the table for a second time, and told the students that they could return to the public sidewalk.

“It was very clear that, first of all, he didn’t understand the free speech policy and was just kind of beholden to this mysterious superior who’s delivering orders through a walkie-talkie,” DeLaurentis said.

DeLaurentis asked to speak to the officer’s superior, who explained that H*yas for Choice could table on the sidewalk, provided they allowed three feet of space in front of the table to allow pedestrians to pass safely. When the group was relocated an hour earlier, the officer did not measure the space or explain this three-foot rule.

“I’m really questioning where they got the authority to move someone from a public sidewalk,” Grace said. “I think that that is just showing a blatant lack of training when it comes to what students’ rights are on and off campus, what should be happening and how the university selectively chooses to support some speech and systematically oppress other speech.”

H*yas for Choice’s protest follows Wuerl’s recent history with the university. The archbishop criticized the university for inviting then-Health and Human Services Secretary Kathleen Sebelius to speak at the Georgetown Public Policy Institute’s graduation in 2012. Sebelius supported the Affordable Care Act’s contraception mandate, which required employers to provide their employees with coverage for contraception.

“While we understand that Cardinal Wuerl is a major figure in Washington’s Catholic life, he also has some really controversial opinions, especially in regard to LGBTQ people and women’s health,” DeLaurentis said. “We were out there to demonstrate that while Georgetown may be giving him an honorary degree, the fact that they’re giving them this degree kind of flies in the face of a lot of Georgetown students, both who identify as LGBTQ and who care about women’s health.”

Grace said that bestowing such a degree to Wuerl goes against Georgetown’s pluralist mission.

“Georgetown can claim to be pluralist and can claim to do all these things, but please back it up,” Grace said. “Please don’t bestow a degree completely willingly upon someone who takes positions that we feel to be rather controversial and offensive.”