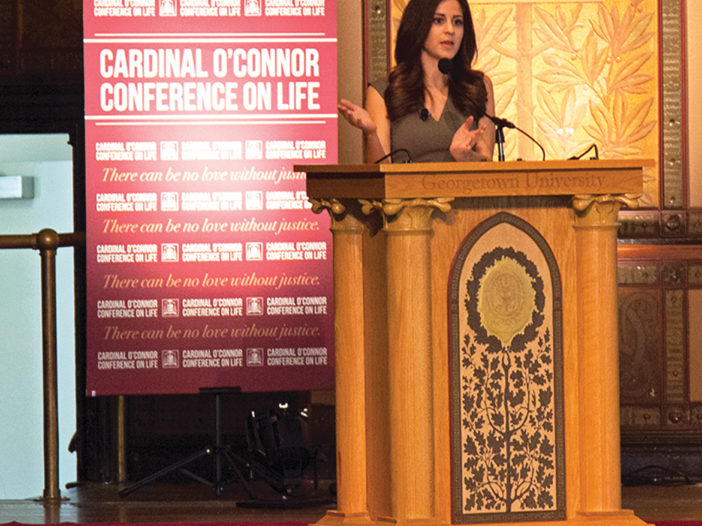 Over 600 Georgetown University community members have signed a petition circulated by pro-abortion rights student group H*yas for Choice in anticipation of the 22nd Cardinal O’Connor Conference on Life.

The OCC, which is scheduled to be held virtually Jan. 30, was founded by Georgetown students in 2000 and is the largest student-run anti-abortion conference in the United States. The conference’s namesake, Cardinal John J. O’Connor (GRD ’70), was an archbishop of New York who took a strong anti-abortion position while promoting homophobic views and policies, according to the petition.

The petition is the latest development in student advocacy against the conference and asks the university to publish a communitywide email by Jan. 29 condemning Cardinal O’Connor’s actions and the racist, misogynistic, homophobic and transphobic rhetoric of the speakers and panelists. The petition also asks the university to require student organizers to change the conference name by December 2021.

Georgetown should not endorse the discriminatory views and ideas the conference promotes, according to the petition.

“Year after year, this conference glorifies Cardinal O’Connor – an infamous homophobe and misogynist – and provides a platform for extremely racist, sexist, anti-LGBTQ speakers to indoctrinate hundreds of impressionable teenagers with their hateful ideologies,” the petition reads. “The fact that Georgetown continues to host COCC demonstrates its lack of regard for marginalized students and their interests.”

Aimee Murphy, the founder of Rehumanize International, an organization against all violence, is the conference’s keynote speaker. Other panelists include Reggie Littlejohn, Valerie Huber, Alveda King and Sister Dede Byrne (MED ’84), all advocates in the anti-abortion movement.

Panelists have promoted anti-LGBTQ and anti-abortion beliefs in their advocacy work, according to the petition.

Huber, who was appointed by former President Trump to serve in the U.S. Department of Health and Human Services Office, has promoted abstinence-only sex education programs and argued teaching about consent and sexual assault preventation encourages tennage sexual behavior.

In 2015, King, who is Martin Luther King Jr.’s niece and currently serves on the pastoral team of Priests for Life, opposed legalizing same-sex marriage in Georgia, and in 2010, she compared same-sex marriage to genocide in a speech to the National Organization for Marriage.

The petition chiefly focuses on the conference’s speakers and namesake as they threaten the well-being of the student body and conference attendees, according to Lauryn Ping (COL ’23), a member of the HFC Advocacy Board and the primary author of the petition.

“We decided to focus on the problematic use of the speakers and the namesake, because I think those are the most pressing issues that we have with the conference,” Ping said in a Zoom interview with The Hoya. “Given our current political climate, I think it’s more important than ever to really reject homophobia and transphobia and racism outright.”

The OCC board maintains support of these panelists and finds their advocacy to be positive to the anti-abortion cause, according to OCC co-directors Luke Lamey (SFS ’21) and Joey Yacovone (COL ’22).

“Our speakers are leaders within the pro-life community and strong advocates for women and children,” Yacovone and Lamey wrote in an email to The Hoya.

O’Connor was a vocal anti-abortion advocate who often reaffirmed the Catholic Church’s stance against the right to choose. Many Catholics have lauded the cardinal for his work defending organized labor, his advocacy for homeless people and his opposition to the death penalty in his pro-life advocacy.

O’Connor also condemned a 1986 New York bill that would grant legal protection to the LGBTQ community and supported a ban on LGBTQ members from holding masses on the property of the Diocese of Brooklyn.

Student run organizations can invite any speaker to campus, according to Georgetown’s speech and expression policy, a university spokesperson wrote in an email to The Hoya.

“An appearance of any speaker or guest on campus is not an endorsement by Georgetown University,” the spokesperson wrote. “Georgetown is firmly committed to the Catholic Church’s teachings and values, including those about the sanctity and dignity of life, and we strongly support a climate that continues to provide students with new and deeper contexts for engaging with our Catholic tradition and Jesuit identity.”

Since its creation in 2000, the conference has garnered significant student criticism. In the past, students have protested outside the conference and shared fliers around campus in the days leading up to the event.

The OCC’s student organizers, however, remain committed to the conference’s mission and core beliefs, according to Yacovone and Lamey.

“In his first year as archbishop of New York, Cardinal O’Connor made an offer that any woman in need should come to him for help rather than abort her child, recognizing the need to care for the dignity of both women and children,” they wrote. “The Cardinal centered women in his pro-life argument.”

The rhetoric of the OCC is harmful to many of Georgetown’s marginalized communities and should not be endorsed by the university, according to GUSA Press Secretary Jacob Bernard (SFS ’23).

“Georgetown University’s symbolic commitments to supporting equality and racial justice are not enough–we would like to see the University take meaningful action to support women and the LGTBQ+ community by supporting Hoyas for Choice initiatives, combatting homophobia, and investing in improved mental health services,” Bernard wrote in an email to The Hoya.

Until Georgetown denounces the speakers, platform and namesake of the conference, the administration is not fully supporting all students, Ping said.

“The conference also provides a platform for extremely racist, sexist, anti-LGBTQ+ speakers to basically indoctrinate hundreds of teenagers with their hateful ideologies, and I’m sure Georgetown has repeatedly proclaimed that it supports racial justice, gender equality and LGBT rights,” Ping said. “It’s active support of this conference, despite the problematic speakers and its namesake, that demonstrate that the university is falling woefully short of its espoused ideals.”

This article has been updated to correct a quote.