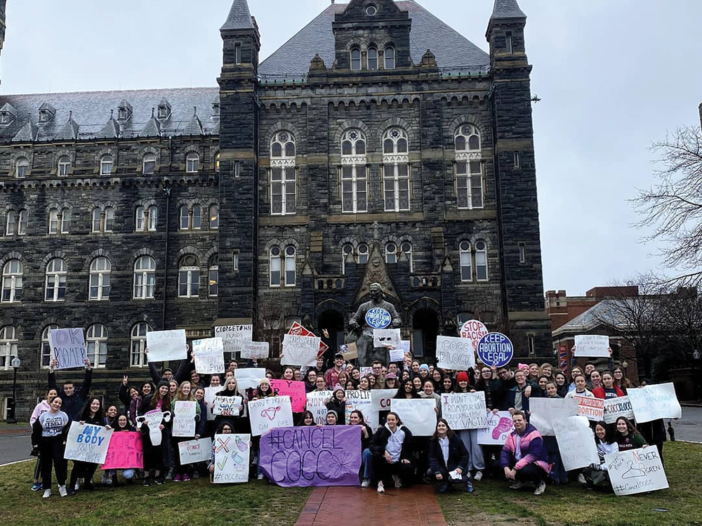 What happens to a club known for handing out free contraceptives when campus life grinds to a halt because of COVID-19? To Josie Mills (COL ’21), one of two directors of advocacy and organizing for H*yas for Choice, a pro-abortion rights student group, the answer was unclear.

“I think we did have a brief moment where we were like, ‘Oh, if we’re not handing out that many condoms, what are we really going to do?’ Like, that was kind of our founding thing,” Mills said in a Zoom interview with The Hoya.

HFC depends heavily on in-person interaction to promote reproductive justice and safe sex on campus, so over the summer, HFC was forced to find new approaches to help students with reproductive health in the new environment, including creating a new system for condom and emergency contraceptive distribution.

As a Catholic institution, Georgetown University does not provide many sexual health resources to its students, including condoms and other contraceptives, leaving HFC to fill in the gaps, according to Elianna Schiffrik (SFS ’21), president of H*yas for Choice.

“Being the only source of condoms, lube and Plan B on campus is so important to us any semester,” Schiffrik said in a Zoom interview with The Hoya. “But it’s of heightened importance right now that we prioritize that because we’re hyperaware of the fact that, just because we’re in a pandemic and a lot of resources aren’t there anymore for students, we still need to make sure that the gaps that we fill are continuing to be filled.”

HFC is not a stranger to obstacles. Throughout its history, the organization has lacked formal recognition from the university, which has viewed the club’s goals as antithetical to Georgetown’s Jesuit identity. This lack of recognition even prevents it from using the trademarked word “Hoya.” This has not discouraged the group in its 30-year history, however, leading it to face the new challenges of the COVID-19 era head-on while maintaining its voice and presence in the larger Georgetown community.

With the transition to a virtual environment, HFC leadership anticipated students would have increased difficulty accessing free contraceptives and other resources the group has provided in the past. Halting those services was out of the question, according to HFC Director of Media and Communications Chloe Kekedjian (COL ’22).

Finding a safe and inclusive way to continue distributing sexual health products was a challenging task for HFC, as the club sought to balance encouraging safe sex while practicing COVID-19 safety and ensuring the protection of club members, according to Kekedjian.

“How do we provide people condoms and emergency contraceptives without putting our own members at risk or encouraging people to do things that are bad during a pandemic?” Kekedjian said in a Zoom interview with The Hoya. “I think it’s been helpful and it’s been harmful, because we haven’t been able to focus on things that we love, but we’ve also found new ways and new focuses, which is exciting.”

Typically, HFC is able to provide resources and support to students by setting up tables in various locations on Georgetown’s campus.

HFC has been able to mimic tabling and continue operating because many of its board members are seniors and live in the Washington, D.C. area, allowing them to maintain a pared-down version of their regular tabling functions, according to Director of Contraceptives and Tabling Nina Yee (COL ’23).

Yee, along with other members of the board, distributes free condoms, lube and Plan B from their residences in west Georgetown and Burleith in an attempt to preserve the goal of on-campus tabling. Students can email Yee and the other board members to schedule a time to pick up resources in addition to their weekly tabling schedule.

Although HFC’s services look different this semester, the organization has prioritized retaining some key aspects of its programs, including anonymity for students and an open-access philosophy, according to Vice President Rachel Harris (COL ’21).

“I’m sure this isn’t as accessible as just walking through Red Square on your way to class. But we hope that just by kind of having an open-door policy, that folks feel comfortable enough to come and ask for the supplies that they need,” Harris said in a Zoom interview with The Hoya.

While HFC regards contraceptive distribution as one of the most crucial ways to support students’ sexual health on campus, the group has launched other advocacy efforts, including a menstrual equity campaign and a push to guarantee year-round free STI testing on campus at the Student Health Center, according to Katarina Watson (COL ’22), HFC co-director of advocacy and organizing.

The ongoing COVID-19 pandemic has dealt a heavy blow to the logistical side of these initiatives, however, as HFC grapples with a diminished organizing capacity and increased focus on health-related issues to COVID-19, according to Schiffrik.

Although some in-person advocacy campaigns have been deprioritized, the virtual environment has allowed HFC to improve its overall sense of community, according to Kekedjian.

“I think one of the most important things is we’ve all just kind of learned to be gentle with each other,” Kekedjian said. “We have to be understanding towards other people and mindful that they may have bigger things going on. I actually think it’s kind of fostered a better community.”

Despite the challenges of organizing virtually, the HFC advocacy team has remained active this year, focusing on both addressing issues on campus while also hosting a series of events on various topics related to sexual health and justice.

One of HFC’s largest advocacy efforts this past year came in response to the annual Georgetown student-founded Cardinal O’Connor Conference for Life, the largest student-run anti-abortion conference in the country, according to Lauryn Ping (COL ’23), a H*yas for Choice member who led this year’s movement against the event.

Ping drafted a petition calling for the university to change the name of the conference and publicly condemn the racist, misogynistic, transphobic and homophobic beliefs of the late Cardinal O’Connor and the other panelists. The petition, submitted to the university in January, received over 600 signatures from various organizations and members of the Georgetown community.

For Ping, the petition served as a necessary step to not only protest the rhetoric of the conference but also to highlight misinformation regarding sexual health that the conference’s speakers pass along to an audience that includes many high school students.

“Hundreds of — mainly — high schoolers are coming to these conferences and being indoctrinated into these ideologies. It’s really shaping their mindset and framing their mindset around reproductive justice in a really harmful way, and spreading a lot of misinformation,” Ping said in a Zoom interview with The Hoya. “And so I think the fact that it’s the largest student-run conference in the nation is really concerning.”

The OCC organizers maintain that the conference aims to promote truth and respect across ideological divides, according to OCC co-directors Luke Lamey (SFS ’21) and Joey Yacovone (COL ’22).

“We will continue to defend the sanctity of human life at all stages and build a culture of life at Georgetown. We hope to engage with those who may disagree through respectful dialogue and mutual understanding,” Lamey and Yacovone wrote in an email to The Hoya. “The Cardinal O’Connor Conference on Life has a place on campus.”

Prior to this year, HFC protested the conference annually but typically focused opposition around public, in-person demonstrations. While the virtual environment facilitated a more widespread circulation of the petition, Ping believes in-person semesters have allowed for more opposition to the conference.

“In the past, if the university refused to respond, or gave a response that students didn’t like, you could occupy the Office of the President or put up flyers everywhere, really pressuring the administration to do stuff,” Ping said.“But right now, there’s not tons that we can do to make them change their mind besides continuously emailing them.”

Despite the fact that the petition’s goals were unmet, the petition was still successful in making the wider Georgetown community more aware of the issues regarding the conference, according to Kekedjian.

“What was really amazing about it is the amount of support we got from students, alumni and even, like, parents and professors putting their careers on the line to say ‘Hey, this is not representative of what we stand for,’” Kekedjian said. “I think a big chunk of this is about public perception. And most students just didn’t know that their money is going towards this.”

HFC has also been able to transition to virtual advocacy by hosting a number of educational events, including a series of question-and-answer panels about race and hookup culture, titled “So You Wanna Fuck?”

The events put on by HFC offer students the chance to have meaningful conversations on topics that are sometimes stigmatized, according to Ainsley Dean (SFS ’24), who attended one of HFC’s “So You Wanna Fuck?” events.

“I think even when we’re not in person it’s really important to have events that continue to normalize and empower sexuality, especially after coming from a conservative school that essentially tried to teach me that my value as a person came from my modesty,” Dean wrote in a statement to The Hoya. “I think HFC does a great job of normalizing and empowering people when it comes to those topics.”

While sexually transmitted infections have not been at the front of the public consciousness because of the COVID-19 pandemic, they still pose a serious threat to national health. For example, experts have found acute HIV cases have increased over the past year, coinciding with a reduction in routine screenings because of the pandemic.

This deterioration in sexual health and positivity has been exacerbated by a lack of adequate sex education, especially since COVID-19 has become a priority, Watson said.

Virtual learning also prevents informal sexual education from taking place effectively, as students often rely on one another to learn about sexuality and relationships, according to Watson.

“A lot of sex ed comes from small, random interactions with people. You know, like, just random conversations you have with a friend when you’re eating at Leo’s or whatever,” Watson said. “We have so few of those now.”

Even without a pandemic, the breadth of sex education varies drastically from state to state and country to country, and many students may enter college without comprehensive sex education. Especially as restrictions loosen and people get vaccinated, it is important students have the background knowledge they need to safely be sexually active, according to Yee.

“A lot of kids who enter Georgetown don’t have an adequate sexual education, so I think that would be one of the best initiatives to work on as people are getting back to being sexually active,” Yee said.

COVID-19 has the potential to impact sexual health in many ways going forward, even beyond the concern of staying safe from infection, according to Sarah Tyree (COL ’24), who organized HFC’s “So You Wanna Fuck?” event in March. For example, the normalization of getting tested for COVID-19 — and asking others about getting tested for the virus — could spill over into conversations about COVID-19 safety between sexual partners, Tyree said.

“Because it’s so normalized now to ask for a COVID test, it’s not quite as heavy to ask for an STD test,” Tyree said in a Zoom interview with The Hoya. “So that’s kind of made it easier to prioritize your health and your sexual health in the context of COVID.”

HFC hopes it can support the Georgetown community through the end of the academic year by continuing to build an inclusive environment for all Georgetown students and continuing to make change on both the administrative and individual scale, according to Mills.

“I’m very much on the grassroots organizing, on the empowering local initiatives train, which came from a huge self-confidence boost from HFC and this community,” Mills said. “Sometimes you can’t make things happen, but here you can. If you have our support system, you can.”