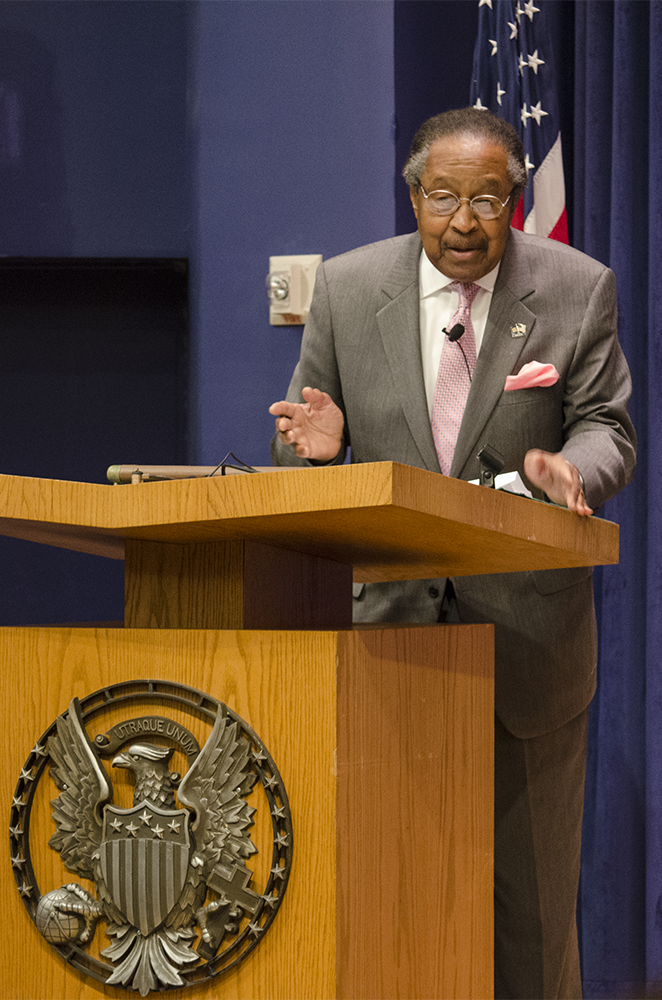 Former speechwriter and personal advisor to Dr. Martin Luther King Jr. Clarence Jones reflected on King’s legacy and his personal activism in the civil rights movement during a talk held in the Intercultural Center auditorium Monday. The event, which filled the auditorium, was moderated by Chris Wadibia (COL ’16) and hosted by the Georgetown University Lecture Fund.

Jones opened his talk by stressing how the work and legacy of King makes him one of the largest contributors to racial equality in U.S. history, asserting that King’s accomplishments cannot be matched by any other historical figure.

“With the exception of the Emancipation Proclamation of 1863 and the presidency of Abraham Lincoln, Martin Luther King Jr. may have done more to achieve social justice, racial equality and the creation of economic opportunity in the 20th century than any other person or event in the previous 400-year history of the United States of America,” Jones said.

Jones first met King in California during the 1960s when King came to his house and asked him personally to join his cause.

Jones initially joined King’s team to help defend him in his 1960 tax fraud case, which eventually was ruled in King’s favor, after the state of Alabama specifically targeted King on faulty charges. After the trial, Jones served multiple roles for King in addition to legal counsel, including speechwriting.

“Friday evening, doorbell rings, there standing outside of my door was Martin Luther King Jr. In 1960, he was in 2016 terms, a celebrity. He had been on the cover of Time and Life magazine,” Jones said.

Jones noted the current implications of the civil rights movement in America today, focusing particularly on the Supreme Court case of Shelby County vs. Holder, which weakened voting rights in 1965.

Jones said the implications of low minority voter turnouts is a striking example of racial inequality, citing Ferguson, Mo., where the shooting of black male Michael Brown in August of 2014 garnered nationwide attention.

“In Ferguson, Mo. for example, where the shooting of Michael Brown occurred, 67 percent of the population was black, but in 2013 only six percent of the eligible black voters cast their ballot in the municipal elections,” Jones said.

According to Jones the United States needs to come to grips with the legacy of slavery and its impact on American society since it threatens the progress of racial equality every day.

“The impact of this legacy of slavery upon current descendants of slaves and slave holders must be forthrightly acknowledged and addressed,” Jones said.

Jones emphasized the prevalent issue of gun violence around the U.S. and its disproportionate impact on youth and minorities. He also advocated for increased focus on the widening socio-economic gap within the country and questioned how the U.S. could still have so many living in poverty.

“There are people sleeping on the sidewalks in the richest country in the world. That is your ethical and moral challenge. That is the challenge of the legacy of Martin Luther King Jr. and the civil rights movement,” Jones said.

As the event opened to audience questions, Jones outlined his two primary influences during childhood: his parents and schooling at a Catholic boarding school.

Jones said he is grateful for his parents and for the lengths to which King went to make his future better.

“There is an African proverb that is always in the forefront of my mind whenever I travel around and speak and the proverb says, ‘If the surviving lions don’t tell their stories, the hunters will get all the credit.’ And I am a surviving lion and I use the providential longevity I have to tell the world about that most extraordinary lion we had in our pride, Martin Luther King Jr.,” Jones said.

When asked what advice he would give to younger generations, Jones said current power structures still strongly favor white men. He addressed the audience and asked that the new generations participate in politics to change the status quo.

“They’re not going to give it to you. The way you got to get it is to take it. And the only way you take it is by registering to vote, and to vote. Because the ultimate source for the creation of power is the exercise of the vote,” Jones said.

Skylar Luke (SFS ’19), who attended the event, said she appreciated the extent of the discussion and applauded Jones for sharing his insights into present day struggles concerning race and prejudice.

“Being in the presence of someone who was a near and dear friend of Dr. Martin Luther King is just amazing,” Luke said. “I mean there aren’t too many people that are alive today that can say that they’ve walked hand in hand with Dr. King.”