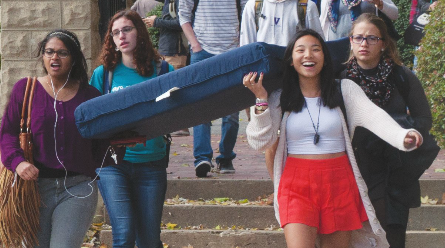 In the spring of 2013, Willa Murphy was violently raped by a fellow Georgetown student.

It was such a traumatic experience that it took over a year after her rape before she was able to tell anyone, not uncommon for survivors. It was only in June 2014, after she had taken a medical leave of absence and been off campus since that January, that she officially told the school she had been raped.

I learned all of this two weeks ago, when I met Willa for the first time.

Willa should be a rising senior in the College, majoring in women’s and gender studies. Now, she is unsure whether she’ll even graduate from Georgetown at all (although her rapist almost certainly will). As traumatic as her rape was, she says the way Georgetown treated her after she tried to report has been worse.

Willa has had to fend for herself to secure the few accommodations Georgetown has begrudgingly given her (not to mention the times they denied her requests for accommodations), despite the fact that legally, Title IX requires the provision of reasonable accommodations to survivors.

Last summer, she also tried to report the name of her rapist to the Georgetown University Police Department, only to be severely re-traumatized by that experience. After she asked to speak to someone about sexual assault, she overheard two officers disparaging her, having looked her up using the information she gave them. She specifically remembers two things she heard them say: “She was suspended in January, what is she even doing here?” and “What the hell are you gonna do with her?”

As she listened, she remembers seeing the university’s public announcement video about sexual assault on the flat-screens in the waiting room. Eventually they gave her the phone number of a female officer, which she threw away immediately after leaving the office, trying to hold back tears. This was “everything that I was afraid of,” as Willa put it. That would be her last interaction with GUPD.

Last summer, when she tried to return to campus, there was roadblock after administrative roadblock. At first, her dean suggested she take classes elsewhere. When she said she wanted to stay in D.C., he suggested, among other schools, University of the District of Columbia Community College. He assured Willa, who took AP Calculus in high school, that credits from UDC-CC would transfer to Georgetown — except if she took algebra.

If not for the help of a pro bono lawyer from the Network for Victim Recovery of D.C., she would not have been allowed to come back in fall 2014 at all. Despite her readmission, the obstruction on the part of the university left her burnt out and re-traumatized — three weeks into that semester, she withdrew under extreme pressure by administrators. Her dean used the fact that her rapist was still on campus to persuade her and her mother that she would never be able to academically succeed at Georgetown — not before suggesting she return after he graduated.

This spring, Willa got the Council on Studies to “entertain” her petition to return that summer. Two weeks ago, Willa received an F in her four-week pre-session “Introduction to Ethics” class (it was the first time she had been in a classroom in almost a year). Originally, she had planned on retaking “Introduction to Women’s and Gender Studies,” for a better grade, since she had previously received a D as a direct result of the trauma from her rape. Despite this being the foundational class of her major, Willa’s dean sent her a patronizing email “reminding” her that she could not retake a class she had already gotten credit for, forcing her to drop that class and switch to “Introduction to Ethics,” which she failed. Because of that F, the university has expelled her.

The university justified expelling Willa based on that F grade, despite her professor asking the dean’s office for a grade change one week after the class ended. She appealed this dismissal and on July 9th, she sat before an appeals panel, composed of a physics professor, a computer science professor, and a college dean she had never met, while they looked at her case file and asked her questions about her rape, its aftermath and why she thought she should be allowed to come back. They handed down a decision: she could take a voluntary withdrawal instead of dismissal.

Behind institutionally perpetrated injustice, there are always good people hiding somewhere in the midst, working within the system to fight the good fight. Ultimately, though, nothing is clear-cut except the actual consequences the system inflicts.

Instead of standing with Willa, or asking what she needs, the university has consistently pushed her to leave campus and has made no effort to find ways to make sure she could finish her Georgetown education. Regardless of their intentions, it is no exaggeration to say that these administrators are ruining Willa’s life.

Instead of streamlining the administrative process to make it clearer for survivors, the dean’s office made Willa go through committee after committee after committee, each time having to repeat how she was raped. It didn’t help that she had difficulty recounting the list of different people or offices that she had contacted for help since she was raped, because it was so long: Title IX coordinators and sub-coordinators, therapists, psychiatrists, professors, the Academic Resource Center, Student Health Services, GUPD and three different deans within the dean’s office.

Yet even through all that, Willa trusted that Georgetown would do the right thing, and therefore had not gone public about her mistreatment at the hands of administrative bureaucracy.

Injustice is the administration refusing to accept Willa’s philosophy final a week late, so they can expel her for failing while being on academic probation; yet, they had no problem giving her an additional week to think about changing her expulsion status to a voluntary withdrawal, ignoring a previous email from Willa to her dean: “Since I was raped, nothing about this has been voluntary. So I do not voluntarily withdraw.”

I honestly have no idea how she keeps track of everything, how she keeps going every day, how she still has so much fight in her. College is hard enough; Willa’s experience proves it is nearly impossible for survivors.

That’s the thing though — Willa is a survivor in every sense of the word, but she is also so much more than that. She has this incredibly witty and intelligent humor that often flies over my head; she is unbelievably kind; she has a remarkable passion for women’s and gender studies; she is a killer makeup artist; she knows pop culture like the back of her hand and can quote verbatim skits from “Key and Peele” and “Kroll Show,” and has an encyclopedia of reaction gifs; she can show you every YouTube video you never knew you had to see — she once watched Bill Clinton’s 2012 address to the Democratic National Convention, “to get pumped up” for a night out with friends. Above all, she has this unrelenting desire to learn and analyze and reflect. She belongs at Georgetown.

Perhaps most impressive is Willa’s strength, courage, persistence and deeply embedded sense of purpose. She has the kind of bravery of which most people only dream; she has this unyielding drive that is practically unheard of. Willa is fighting not just for herself, but every other survivor out there.

As a condition of publishing this piece, Willa wanted to make clear that she only speaks for herself and for her experience; however, if she — a white, upper-middle class, straight, cisgender, able-bodied female, with a tremendously supportive family — had this difficult of a time of dealing with Georgetown and being a survivor on campus, there are probably people with much worse experiences than hers.

In my opinion, Willa’s commitment to justice, especially in the face of tremendous adversity, makes her as much of a Hoya as any student actually allowed to attend Georgetown. Clearly, given the administration’s institutional problems, our campus needs Willa and her moral compass now more than ever.

Being a true Hoya means taking pride in our Jesuit identity. “Ad Majorem Dei Gloriam — “for the greater glory of God” — is plastered all over our campus, and yet what the administration is doing to Willa is downright sinful. “Contemplation in action” is another hallmark of Georgetown’s Jesuit identity, and yet the administration seems to be going through Willa’s case in the most impersonal, meaningless way possible. We pride ourselves in “cura personalis” and “educating the whole person” — apparently survivors don’t count.

As Hoyas, we need to take back our Georgetown and rewrite our reputation, so all survivors know we are truly women and men for others. And more importantly, as human beings with a conscience and beating hearts, we need to stand with Willa because the administration has failed to do so.

If Willa is permanently expelled from Georgetown, which it increasingly appears like that will happen despite appeals, she wants to make sure that she left having done everything she could for all the other survivors that remain. We all have a moral obligation to ensure that her righteous struggle is not in vain. There are unfathomable systemic injustices that we must make sure no other survivor on Georgetown’s campus ever has to experience.

Zoe Dobkin is a rising senior in the School of Foreign Service. Willa Murphy entered Georgetown in fall 2012 as a member of the Class of 2016.

Editor’s Note: Zoe Dobkin wrote this piece in collaboration with Willa Murphy; thus, they share a byline. For reasons of clarity and subject matter, we have elected to keep this piece in Zoe Dobkin’s voice, to which instances of first-person perspective should be attributed.