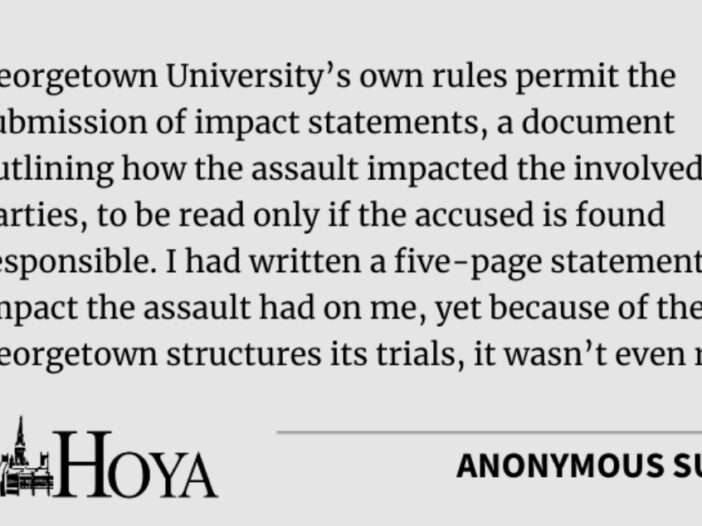 It happened in the fall of my senior year. I rarely went out, but one night, hanging out with a friend turned into going to a pregame which led to going to Chinese Disco. I was not planning to go out that night and was still in my gym clothes. Several drinks on an empty stomach later, my vision became blurry. At one point, my friend and I were dancing on tables. Soon after we got off, though, he disappeared, presumably to use the bathroom. His friend — a stranger to me — had been hovering over us for quite some time.

After my friend left, the stranger came closer and started talking to me. I remember pulling out my phone to check my emails and avoid conversation. I started browning out. My friend never returned and after some time, his friend, who was affiliated with a fraternity linked to accusations of sexism and bigotry, told me I was too drunk and he would take me home. I don’t remember the walk home or entering the dorms, but I remember walking into a room that resembled my own dorm and falling asleep on the bed.

I remember only bits and pieces. At one point I woke up and I was naked. I later remember being woken up to be turned around, where I felt something inserted up my butt. After that finished, I tried to roll off and get away, but I couldn’t even stand straight and struggled to gather and put on my clothes. Later, I remember being crutched along across campus to be dropped home.

There were security cameras in many buildings we had entered across campus along the way. I remember I kept asking him who he was. As we neared my house after the incident, he said he wasn’t finished with me. This memory, the last one I have from that night, has given me many nightmares since.

I woke up the next morning in a lot of pain, not knowing much of what had happened.

After realizing what happened to me, I froze and didn’t know what to do. A few weeks later, I confronted my assaulter through a Facebook message, and he confessed to the assault. He said he was very sorry and felt terrible for what happened, adding that he’d never done anything like it before.

I’ve replayed the parts I do remember from that night over and over a million times. But the reality is, I’ll probably never fully know what happened.

Even worse, because of my conservative upbringing, I blamed myself for what happened that night. Two months later, when I learned about this person’s pattern of predatory behavior, I was finally able to realize that none of it was my fault.

My story is not uncommon at Georgetown University, where the rates of sexual assault are higher than they are at other universities across the nation. Furthermore, these rates have stayed consistent over recent years. In 2016, 31% of female students reported that they experienced nonconsensual sexual contact, while in 2019, 31.6% of female students reported the same thing. Though 47.4% of students at Georgetown reported experiencing some form of sexual harassment in the 2016 climate survey, the Office of Student Conduct held only 17 Title IX hearings between 2014 and my trial in August 2018.

University officials discouraged me from reporting what happened, claiming to care about my well-being. They told me that this wasn’t what was best for my mental health, especially in my last semester of college.

Additionally, I found Georgetown’s resources lacking. It took an entire month for me to get an appointment with Health Education Services, a confidential space designed to support students with a variety of issues, including sexual assault. For me, this month was longer than any other: I felt unsafe, and I was unable to eat, sleep or concentrate in any of my classes.

Only after several months did I finally report what happened to me. Throughout my senior year, I had sat out parties and events because I was so afraid of being in the same space as my assaulter. I was terrorized by what happened and spent my last year at Georgetown struggling academically and hiding in my room.

In the week before I graduated, I just couldn’t have the assault hang over my head any longer. I knew that once my assaulter was no longer a student, I couldn’t report my case to the university. I didn’t want to live with the regret of not speaking up for myself.

In an experience shared by many survivors at Georgetown, university officials were quick to remind me that I could drop my case at any time — or choose not to report at all.

Throughout an extremely taxing process, I learned a lot: First, campus security footage is deleted after 30 days. Since I reported my assault several months after the event, there was no security footage that could have been shown as evidence to corroborate the few memories I had from that night.

I also learned Georgetown’s rules of these trials are designed to protect rapists. At no point was I allowed to make any reference to the other woman he had assaulted.

Yet, the perpetrator and his lawyer, a Georgetown graduate, were allowed to attack my personal cultural values and make racist assumptions to the trial panel: They claimed that because I had grown up in a conservative country, I regretted having premarital sex and was now crying rape. These types of arguments should not have been allowed under the same code of conduct that prevented me from speaking about the other victim.

Georgetown’s own rules permit the submission of impact statements, a document outlining how the assault impacted the involved parties, to be read only if the accused is found responsible. My assaulter spent the whole trial talking about how my decision to file a report led to him having to go to psychotherapy, yet I was not allowed to mention the countless ways in which his assault impacted me. I had written a five-page statement on the impact the assault had on me, yet because of the way Georgetown structures its trials, it wasn’t even read.

I didn’t want my college experience to end on such a negative note. I chose to take control of my narrative and stay at Georgetown for my master’s so I would be able to reclaim these spaces after my assaulter was allowed to graduate alongside me. I wanted to be able to be on campus without having to look over my shoulder every few seconds.

After my trial ended with him being found not responsible, however, I was told my assaulter was allowed to enroll in a School of Foreign Service graduate program.

In graduate school, I decided to delay my graduation and escape the Georgetown environment. Removing myself from Georgetown was the best decision I could have made, as it was the first time since my assault I felt like myself again. My whole purpose for staying at Georgetown was to be able to reclaim the spaces I once called home, yet my assaulter was allowed to attend graduate school alongside me.

Today is the three-year mark of my assault, and only now am I ready to finally share my story. During my trial, my perpetrator focused on the fact that I didn’t file a complaint sooner, but processing these things takes time.

Writing this article doesn’t change my circumstances. I was stuck in the same spaces as my assaulter regardless. Georgetown’s culture of assault is so normalized, and while it’s hard to speak up, doing so is critical in hopes of changing a broken system.

The thing is, I did everything “correctly.” I went through the proper channels and reported my assault and suffered reliving all the trauma and having to face my assaulter.

I often think about what would have been needed for my assaulter to have been found guilty. Would they have needed security footage to believe me? I did not know there was a 30-day period to get justice.

Or was the system just set up against me? Did the school officials know my efforts would be fruitless? Was that why I was initially discouraged from reporting my assault?

I feel very lucky to have had the friends and support that I did because, without them, I wouldn’t have been able to do much. While my first experience with HES was not as helpful, in the final weeks of my time in college, I was put in touch with another counselor who has supported me throughout my journey in every way possible: from talking about my issues to helping me navigate feeling comfortable at events like senior week to supporting and accompanying me to portions of my trial process and even beyond as I continue to make progress in my recovery. I was also lucky to have found pro bono legal counsel to support me through my trial.

Even though I was so fortunate to have had all this support, the system is broken. Georgetown failed me and many other survivors. I went from being a hyperinvolved student on the board of many clubs to someone who hid away from school.

I’ve noticed how backward Georgetown is as a university in dealing with issues of sexual assault. While there’s been progress in my years here, so much more needs to be done. Georgetown needs to strive to do more.

The author is a graduate of Georgetown University.

Resources: On-campus resources include Health Education Services (202-687-8949) and Counseling and Psychiatric Service (202-687-7080); additional off-campus resources include the D.C. Rape Crisis Center (202-333-7273) and the D.C. Forensic Nurse Examiner Washington Hospital Center (844-443-5732). If you or anyone you know would like to receive a sexual assault forensic examination or other medical care — including emergency contraception — call the Network for Victim Recovery of D.C. at 202-742-1727.  To report sexual misconduct, you can contact Georgetown’s Title IX coordinator at 202-687-9183 or file an online report here. Emergency contraception is available at the CVS located at 1403 Wisconsin Ave NW and through H*yas for Choice. For more information, visit sexualassault.georgetown.edu.