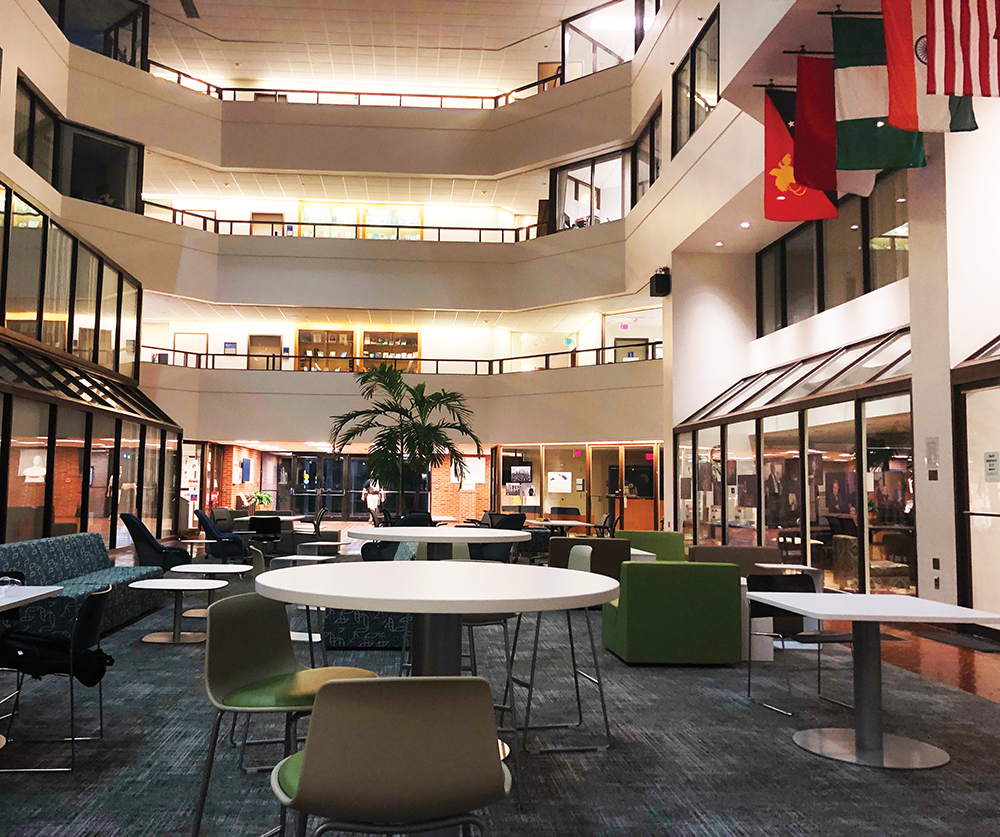 Walking into the Intercultural Center Galleria just a week ago, heavy wooden tables and coffee-stained couches greeted visitors to the central space of the home of the School of Foreign Service and several academic departments. Beginning Tuesday, brightly printed couches and sleek white tables replaced the outdated furniture in the first stage of refreshes to the space.

The updates are the result of a campaign by the SFS Academic Council to change easily mutable elements of the galleria now rather than wait for potential future renovations to the ICC, Siddharth Muchhal (SFS ’21) said.

“Academic council is just really happy that we were able to get this sort of project moving forward,” Muchhal said.

Refurbishing the long-maligned galleria has been the subject of discussion among the SFS Office of the Dean, faculty and students since at least the spring of 2018, when SFS Dean Joel Hellman presented three proposals for the ICC at a public event. Students in attendance at the time raised questions about the lack of a simple option addressing current concerns, asking why the student body must wait years for potential renovations rather than immediate fixes like adjusting lighting and furniture.

“I always felt from the time I arrived here on campus that the Galleria was very underutilized as a space,” Hellman said in an interview with The Hoya. “It wasn’t an inviting space, it didn’t have furnishings or groupings of furnishings that would lead people to talk and engage.”

In response to these and similar conversations, the academic council created and shared a Google Forms survey with students and faculty that asked open-ended questions such as “What are your main concerns with the ICC Galleria (Atrium)? How can it be improved?” The survey was open from April 11, 2019, to April 23, 2019.

Seventeen faculty members and 267 students responded to the survey, naming the lack of seating, poor lighting and excessive noise as some of their key concerns, among others. The survey was used to develop the plans for the cosmetic updates implemented this week.

The galleria previously had 56 maximum available seats. The new seating arrangement has 61 seats, and the layout is intended to make the space more flexible for a range of uses. In addition to increased seating and a variety of tabletops, a rug was added underneath the entire space to control sound in the brick atrium with soaring ceilings that was previously at a constant din, according to Chief of Staff to the SFS Dean Emily Zenick.

“The whole idea is to have a community space,” Zenick said in an interview with The Hoya. “We purposely designed it so that people can move around the chairs and there’s some alone space.”

As the central space in the seven-story ICC, one of the largest academic buildings on campus, the galleria is crucial as a workspace for students both in the SFS and other schools, Mucchal said.

“The furniture layout is obviously much more modern, much more new, much easier to work with, much more inviting for students to sit, study, collaborate with other students — which I think really is the goal of the Galleria as a space, as the heart for the SFS,” Mucchal said.

Although reactions to the new furniture have been mostly positive, according to Mucchal and Zenick, not all students feel that the space is utilized as well as it could be.

Claire Hazbun (SFS ’20), who replied to Hellman’s tweet announcing the changes, said in an interview with The Hoya that the layout is ineffective.

“I think the main priority is to be able to accommodate as many people as possible,” Hazbun said. “The way that they’ve chosen to kind of have individual small seats, or smaller tables, the bar height tables — I just don’t think it’s very efficient.”

Hazbun wishes the update had attempted to simply maximize the space, rather than diversify the types of seating.

“I would say if they were to completely redo it, they should just make a bunch of communal tables that seat four people,” she said. “A couple of couches are fine, but I just don’t think those are functional for most students who often go there to be on their laptops or read or take notes or do homework in between classes,” Hazbun said.

In addition to the galleria, areas in front of the first and second floor elevators received new seating on Thursday that will be installed in the upcoming days. Even more renovations are coming, and artificial lighting will be installed over winter break to improve the lighting in the space, according to Zenick.

“Even on the bottom floors, which are still the most problematic in the ICC, we’re trying to try and create better common spaces in the hallways so that students can use them more effectively,” Hellman said. “There’s still a long way to go in the ICC, and in order to get this building to be truly accommodating and truly welcoming I think this is a good step, and I can say in the first few days I’ve noticed a kind of new energy.”