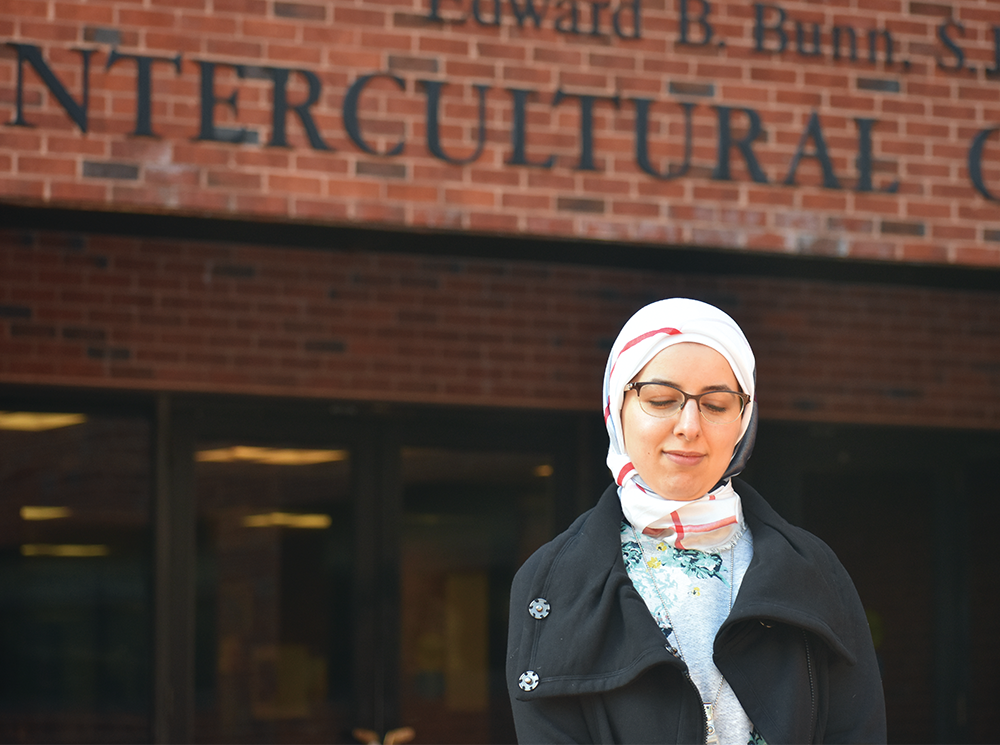 On Jan. 27, exactly one week after President Donald Trump’s inauguration, University Chief of Staff Joe Ferrara interrupted a meeting between students and administrators, carrying with him an announcement.

Trump had just signed an executive order imposing an immigration ban on seven Muslim-majority countries. Student members of the Muslim community, called to an emergency meeting after hearing rumors of a discriminatory policy proposed by the Trump administration, were crestfallen.

The order restricted citizens of Iraq, Iran, Syria, Somalia, Sudan, Libya and Yemen from entering the United States under any visa category for 90 days, and also restrained admission of all refugees for 120 days and of Syrian refugees indefinitely, citing concerns for national security.

The ban effectively restricted entry to the United States for about 218 million people, according to a CNN report with data from the World Bank. The order has been challenged by government agencies and the courts, with the 9th U.S. Circuit Court of Appeals refusing to reinstate the travel ban Thursday after U.S. District Judge James L. Robart (LAW ’73) temporarily suspended the executive order Saturday.

According to Senior Director for Strategic Communications Rachel Pugh, about 20 students were affected by the executive order. In a series of interviews with The Hoya, five members of the Georgetown community recounted their stories.

Indra Acharya (COL ’18) had just returned from his job as an advocate for Jesuit Refugee Services, which seeks to support refugees around the world, when he decided to take a mid-afternoon nap. He woke up to dozens of missed texts and calls from the displaced people he worked with, who were seeking resettlement in an unsettled United States.

A few years before the order, Trump’s inauguration and the 2016 election, Acharya was living in a refugee camp in Nepal after his family fled ethnic persecution in Bhutan. He grew up in a chaotic environment, not knowing if he would be alive the next day — a reality that, according to him, Trump has overlooked.

“There is no hope. There is no food to eat. There is no place to call home,” Acharya said. “There are huts that are made from bamboo. When there is rain you’re not going to be leaving there. If it is really hot, the plastic heats up, and you won’t be able to survive there.”

His losses from the dire conditions of the refugee camp are many: His best friend, his father and his grandfather all passed away in Nepal.

“Does he even understand what it means to be a refugee?” Acharya said.

Through the United States Refugee Admissions Program, which has admitted over 3 million refugees since 1975, Acharya settled in Vermont. Arriving in America, he said, was a humanizing experience.

“I was well aware that America had its own problems, and I realized that I was different,” Acharya said. “But in the meantime I regained some sense of hope because I was in a country where I was a human being. Because before I came to America, I was just a number.”

Rasoul Naghavi (GRD ’19), a visiting researcher from Iran with the Prince Alwaleed bin Talal Center for Muslim-Christian Understanding and an imam at local mosques, immediately thought of his community. For months, he had asserted in his prayers that there were no borders between the Islamic and Western worlds. Now, he was at a loss for words.

“How would I be able to say the administration is not against Muslims and Iran and all of the sudden I see the rhetoric of the president?” Naghavi said. “The same [is happening] with a student that I am working with. What we say doesn’t matter because the narrative we were saying was exactly against the narrative the president was preaching.”

Naghavi said Trump’s rhetoric is detrimental to the image of the United States abroad. According to Naghavi, it is becoming increasingly difficult to convince his friends that the United States has no animosity toward the Middle East.

“I saw the United States only under Obama, and the narrative that he had was that you’re welcome here, no matter who you are,” Naghavi said. “The powerful words of a president are able to damage the whole image of the country.”

The Classroom, A Saving Grace

One year and nine months before the ban, visiting professor Mohammad AlAhmad hired a smuggler to drive him and his family from Raqqa, Syria to the Turkish border. He walked through barbed wire and muddy waters with the hope of continuing his lifelong career as a professor of Arab literature elsewhere — someplace where bombs were not raining down on classrooms.

Surrounded by books in his office in Arabic and English on the topics of diaspora, government and the masculinity of Arab society, AlAhmad, who has published works on refugees, questions the logic behind Trump’s actions.

After enduring dire conditions in escaping al-Assad’s regime, he struggles to find the humanity in Trump’s decision.

“If you have an individual from one of these seven countries who is unfortunately disabled and needs to come to the U.S. for treatment, does this disabled individual pose a threat to U.S. society?” AlAhmad said.

Speaking for a Whole Community

Soon after the ban was announced, Noor Shakfeh (GRD ’17) was inundated with calls and emails from journalists requesting comments on the implications of this policy for the Syrian community. As a child of Syrian parents and raised in the United States, many have looked to Shakfeh to provide insight into the Syrian American perspective on the conflict and its effect on families of Syrian descent.

“I haven’t been able to see my family since 2009, but now they can’t come,” Shakfeh said. “[Syrian President Bashar al-Assad] kind of fractured my family in that sense and then Trump put the cherry on top.”

Inspired by John F. Kennedy and the American democratic values, Shakfeh’s father came to the United States to practice medicine. Shakfeh’s American identity has given her a duty to help her mostly lower-middle class family in Syria — a social class she says is very different in relation to U.S. standards.

“I always felt like I had more privilege and more opportunity, so I felt a sense of guilt,” Shakfeh said. “I want to use my life to try to bring other people the opportunities I have through bettering their lives.”

A Campus United Toward Safer Havens

In the days following the executive order, the Georgetown community came together in solidarity.

On the morning of Jan. 31, students found hope chalked on the walls of the Intercultural Center: “All are welcome here,” the message read.

The next day, about 200 members of the community gathered in Red Square for a vigil to send a message of solidarity to all of those who feel targeted by the Trump administration, including Muslims, students without documentation and members of the LGBTQ community.

In an interview with The Hoya, SFS Dean Joel Hellman opened the possibility of the satellite Qatar campus serving as a place where displaced students can continue their formation. Today, Georgetown remains committed to educating a richly diverse student body, according to Hellman.

“We have a special mandate, a mission. It’s so much more core to our identity as a school and why we were created,” Hellman said. “This school was created for a purpose: Not only to educate and to educate the best minds in it, but we were created around the very themes of globalization that this order really contradicts.”