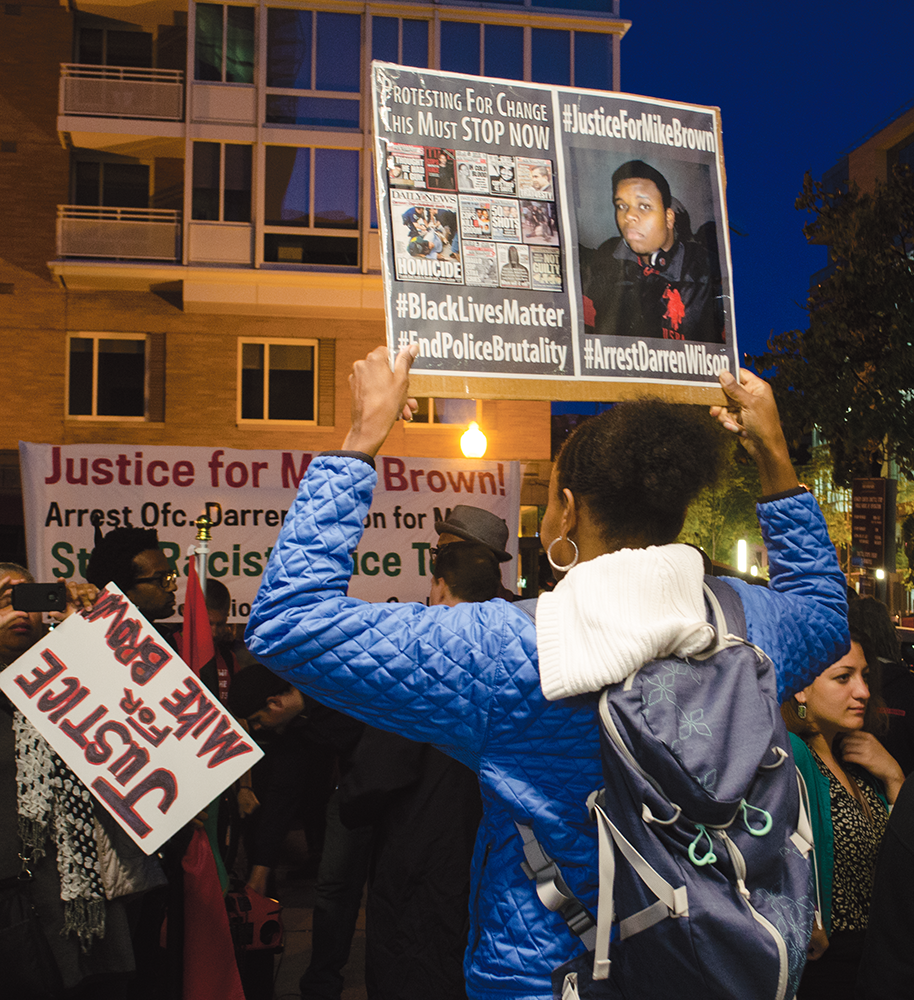 Protesters, including several Georgetown students, marched through the streets of Foggy Bottom and Georgetown on Saturday, calling for the arrest of police officer Darren Wilson and the demilitarization of the U.S. police force in response to the shooting of unarmed black teenager Michael Brown in Ferguson, Mo., in August.

The protest coincided with the initial stages of a Metropolitan Police Department program to increase transparency. MPD began equipping police officers with body cameras Oct. 1 to document all actions taken by officers in relation to civilians. The pilot program, which cost the department $1 million, includes 165 MPD officers.

“We are looking at the best practices for implementing these devices,” MPD Chief Cathy Lanier said in a press release. “We are in an age where this type of technology is becoming more common, and we want to capitalize on that. The presence of cameras will benefit the community and MPD members by improving police services, increasing accountability and enhancing public safety.”

Washington, D.C. Mayor Vincent Gray pointed at the events in Ferguson as a catalyst for MPD’s body camera program.

“Especially since the unfortunate incidents in Ferguson, Mo., have brought the issue of body cameras to national attention, I’m proud that MPD will continue to show leadership in this area,” Gray said in a press release.

The D.C. Ferguson march was organized by the National Black United Front, the ANSWER Coalition, Party for Socialism and Liberation, American Muslim Alliance and We Act Radio, a progressive radio station in D.C. Around 250 to 300 people attended the event, including about 20 Georgetown students.

Demonstrators gathered for the march at the Foggy Bottom Metro Station at approximately 7 p.m., after which protesters gradually made their way to Georgetown by way of M Street. The group stopped traffic at the intersection of Wisconsin Avenue and M Street, and at the corner of 34th Avenue and M Street to talk publicly about the issues surrounding the shooting.

“The idea of the event was that, since people are starting to lose interest and lose focus on the Ferguson issue, which still remains an issue in Ferguson and with police brutality in America, by disrupting traffic and going to the epicenter of privileged Washington in Georgetown, it’s bringing back that this issue is not over, and we’re going to keep fighting for it regardless of whether the rest of the country wants to listen,” said Vincent DeLaurentis (SFS ’17), who attended the march.

Police cars followed the rally through the streets of D.C. to ensure the safety of the protestors and civilians.

“As it relates to marches, the Metropolitan Police Department recognizes individuals’ rights to assemble,” Gwendolyn Crump, director of the MPD Office of Communications, wrote in an email.

Throughout the march, protesters cried, “Shut down police brutality,” accompanied by drumbeats and dancing by the attendees.

“The atmosphere was very inclusive, and onlookers on the sidewalk were encouraged to join, and cars honked all the way from Foggy Bottom to Georgetown,” Carlo Izzo (COL ’17), who participated in the march, said.

Two months after the shooting of Brown, attendees hoped that the march would prevent the incident from fading from the public consciousness.

Attendees also highlighted the lack of accountability for police brutality as a major concern.

“I think the hopes are indicative of the wider Ferguson movement: for people to become aware of how police brutality affects communities of color in America and to take substantive reforms so that brutality isn’t happening, and that when it does happen, there is accountability for the people involved,” DeLaurentis said.

The National Association for the Advancement of Colored People, which had advocated for MPD reforms, applauded MPD’s efforts to increase transparency.

“The NAACP supports MPD officers wearing cameras to ensure transparency and accountability of misconduct by both police officers and citizens. These cameras will offer evidence supporting justice for victims of police misconduct and police officers also deserve proof against unjust claims of misconduct,” NAACP D.C. President Akosua Ali said in a statement.

The NAACP has also called for an expanded crisis intervention training program for MPD, changes to the assault on a police officer statute, a requirement that all MPD officers live in the District and an elimination of racial bias in police work.

Despite the improvements, attendees of the rally were hesitant to call the body camera program a triumph, hoping for more sustainable reforms.

“I think that could definitely be a step in the right direction, but I think if they come at it from more of a training perspective, training police officers in terms of privilege and diversity and inclusion, or getting people to be on a commission to investigate crimes that occur between police and civilians, I think coming from that perspective might be a little more sensitive,” Bylis said.

Saturday’s rally was the latest in a series of similar marches in other areas of the city since Brown’s shooting, including through Chinatown, H Street and Adams Morgan, as well as in front of the White House.