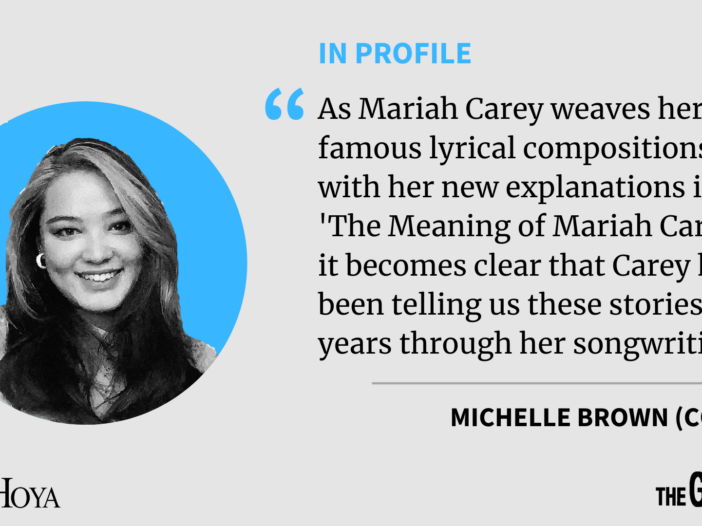 The tragic tale of the exploited female popstar perennially resurfaces. In February, the documentary “Framing Britney Spears” exposed details of the conservatorship binding Britney Spears in a legal straitjacket. In April, Taylor Swift’s album “Fearless (Taylor’s Version)” drew attention to the bullying Swift endured from manager Scooter Braun as she sought to reclaim her power by taking back ownership of her catalog. And this May, Olivia Rodrigo sang, “Who am I if not exploited?” on her debut album “SOUR,” in reference to her status as an emerging female pop star with Disney roots.

As I continue to hear of young women in the entertainment industry bred as cash cows and milked to profit their superiors, I have returned to a book that reminds me of the hidden humanity and suffering that belies the glamour of celebrity: Mariah Carey’s memoir, “The Meaning of Mariah Carey,” written with author Michaela Angela Davis and published in September 2020.

I’m enthralled by biographies. It’s in the delicate details of the upbringings, relationships and hardships of prominent figures that a reader can begin to imagine the most accurate and intimate portrait of a person. With “In Profile,” I intend to highlight the biographies that offer surprising conceptions of familiar faces that, as it turns out, are not as familiar as we may believe.

“The Meaning of Mariah Carey,” which plainly shows that all that glitters is not gold, offers compelling portraits of Mariah Carey as the fearful child, the ambitious teen and the overworked commodity. Her early career under the thumb of abusive ex-husband and producer Tommy Mottola forms a particularly large part of her memoir.

Carey’s relationship with Mottola was fairly publicized; however, this relationship was far from the only abusive one in her life. Carey’s complicated history with her mother and two older siblings are prominently featured, as are episodes of racist bullying from her childhood and her identity as a biracial girl and woman.

As Carey weaves her famous lyrical compositions in with her new explanations in this book, it becomes clear that Carey has been telling us these stories for years through her songwriting. The principal strength of the book is that it makes the link between Carey’s songwriting and her deepest personal struggles much more obvious to casual listeners of her music, encouraging them to return to her discography with a careful ear.

Most people are aware of the abstract “dreamlovers,” “fantasies” and “heroes” that constitute Carey’s number one hits. But it’s often the last track or so of her hit albums, hidden in plain sight, where Carey offers the most intimate of lyrics, the ones that actually draw from her real life. These songs are the ones she quotes most impactfully in her memoir.

Take “Looking In,” for instance, the minor-key hidden gem and final song on 1995’s “Daydream,” the album that also features “Fantasy” and “Always Be My Baby.” “Looking In” deals with the perception versus reality of Carey’s superstardom. She explains she is as far removed from that glamorous ideal as any other spectator of her life. At face value, she is a “girl who lives inside a golden world,” but in fact lives with insecurities and fears, many of which are tied back to her abuser, Mottola — and yet she “smiles through a thousand tears.”

Carey also quotes her song “Outside,” the final track of her 1997 album “Butterfly.” Born to a white mother and a Black father, Carey’s racial identity feels “strange.” As she explains in the lyrics of “Outside,” she is “neither here nor there” in terms of belonging and always merely “somewhere halfway.”

It’s not as if these songs are totally unknown or forgotten. They appeared on No. 1 albums that built up Carey’s stardom. However, those who aren’t self-identified members of Carey’s fanbase likely haven’t explored this more intimate part of Carey’s discography and, as a consequence, probably do see her as the girl who lives inside a golden world, rather than seeing “the real me,” as she says on “Looking In.”

The song lyrics Carey brings back in “The Meaning of Mariah Carey” effectively complement the raw anecdotes she offers, peeling away the gilded bits of her dazzling public persona to reveal a conception of “Mariah Carey” that is no one else’s but her own. The greatest asset to a memoir like this one is that it feels genuine and exposes Carey in a way that other media do not. Sure, Carey gave us “Mariah’s World” for one season in 2016, but the obviously scripted reality show had none of the depth that a thorough memoir can have.

“The Meaning of Mariah Carey” encourages readers to return to Carey’s more honest tracks to see what the star has candidly been offering listeners for years and to realize that even at the peak of her commercial success, she was alarmingly fragile — a sadly familiar story for women in entertainment.