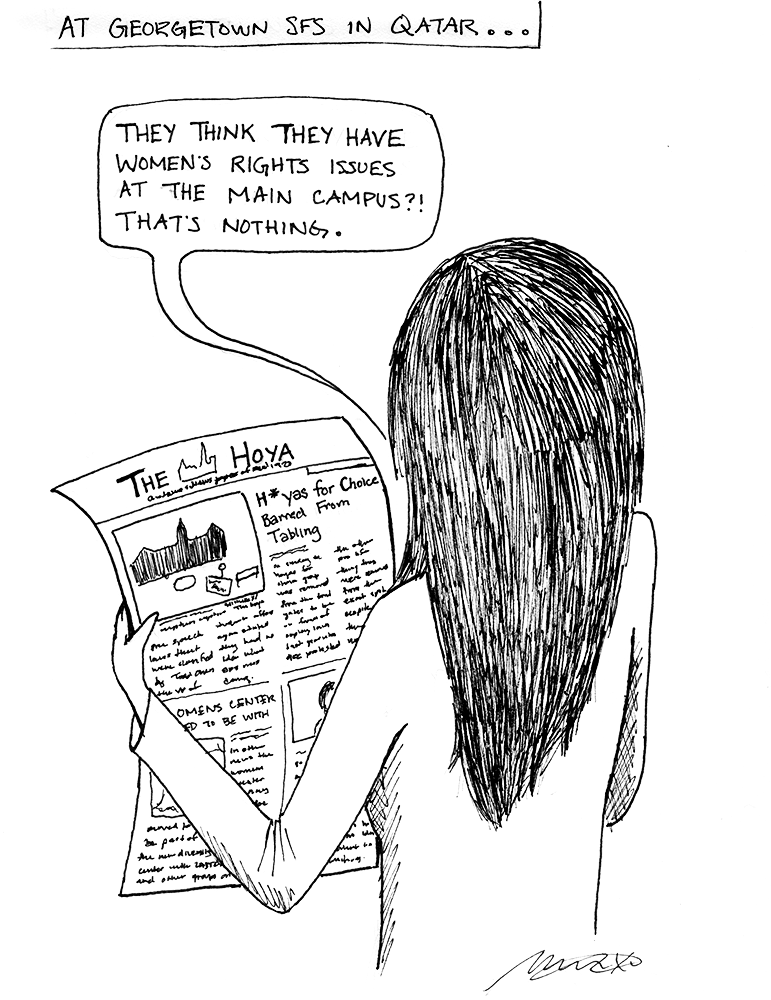 Funded by oil money and corrupt sheikhs, Georgetown University effectively condones and promotes the human rights abuses of our host country. Why does no one talk about this?

Georgetown is not alone; we’re one of a growing number of American universities to give a free pass to our Middle Eastern donors. NYU Abu Dhabi, anyone? Cornell in Doha? It’s no mystery — when wealthy princes offer you hundreds of millions of dollars to build a campus in their country, it’s hard to say no.

But we should still be honest with ourselves about the motives and consequences of that decision. As Georgetown students, as members of a Jesuit community and as global citizens, examining the status quo is not just important, it’s our moral obligation.

Where to begin? Freedom House has consistently ranked Qatar “not free” for over 20 years. Consensual gay sex is a crime in Qatar, punishable by up to five years in prison, but marital rape is fully legal.

Article 134 of Qatar’s penal code mandates prison time for anyone who is convicted of criticizing the emir, and a few months ago, according to Amnesty International, the Cabinet approved a draft of a cybercrimes law that would grant the government extensive powers “to punish anyone who posts or shares content that officials consider harmful to Qatar’s social values or national interests.”

Israel has even alleged that Qatar is tied financially to Hamas, the militant group in the Gaza Strip that was involved a month-long war with Israel this summer.

And perhaps most alarmingly, Qatar uses forced labor and travel restrictions to limit the rights of migrant workers, who make up 90 percent of its population.

“Workers typically pay exorbitant recruitment fees and employers regularly take control of their passports when they arrive in Qatar,” explains Human Rights Watch in a description of the kafala system, which ties a migrant worker’s citizenship to his or her employer. “Migrant workers commonly complain that employers fail to pay their wages on time if at all, but are barred from changing jobs without their sponsoring employer’s consent.” Despite making up 99 percent of the private sector workforce in

Qatar, migrant workers are also prohibited from unionizing or striking.

If a worker decides to leave the country to escape these poor working conditions, he can’t do so without the explicit consent of his employer. This is all part of a clear pattern of rights denial for migrant workers, many of whom are ethnic or religious minorities.

Qatar is certainly more progressive than many of its neighbors, but that doesn’t say much in a neighborhood where women can’t drive and gays are stoned to death. Who is to say that Georgetown’s SFS-Q campus wasn’t built by migrant workers chained by the kafala system? What about protections for SFS-Q’s gay and lesbian students? Female students? Jewish students? What about student media at SFS-Q, which lacks freedom of the press? To ignore these questions in the face of all reason and reality is either negligent, deceptive or both.

These questions must be asked, if not to find answers then at least to start a dialogue around our campus in Qatar and the application of Georgetown’s stated principles that promote equity. It was the Jesuits who coined the term “social justice,” it’s the Jesuits who stress values in our daily lives and it’s now our responsibility as a Jesuit university to examine those values in the context of our own institution. We cannot continue to fulfill our mission while ignoring egregious human rights violations in our own backyard.

Speak up, Georgetown. It’s time to publicly acknowledge the harsh reality of our partnership with Qatar.

Ari Goldstein is a freshman in the College.