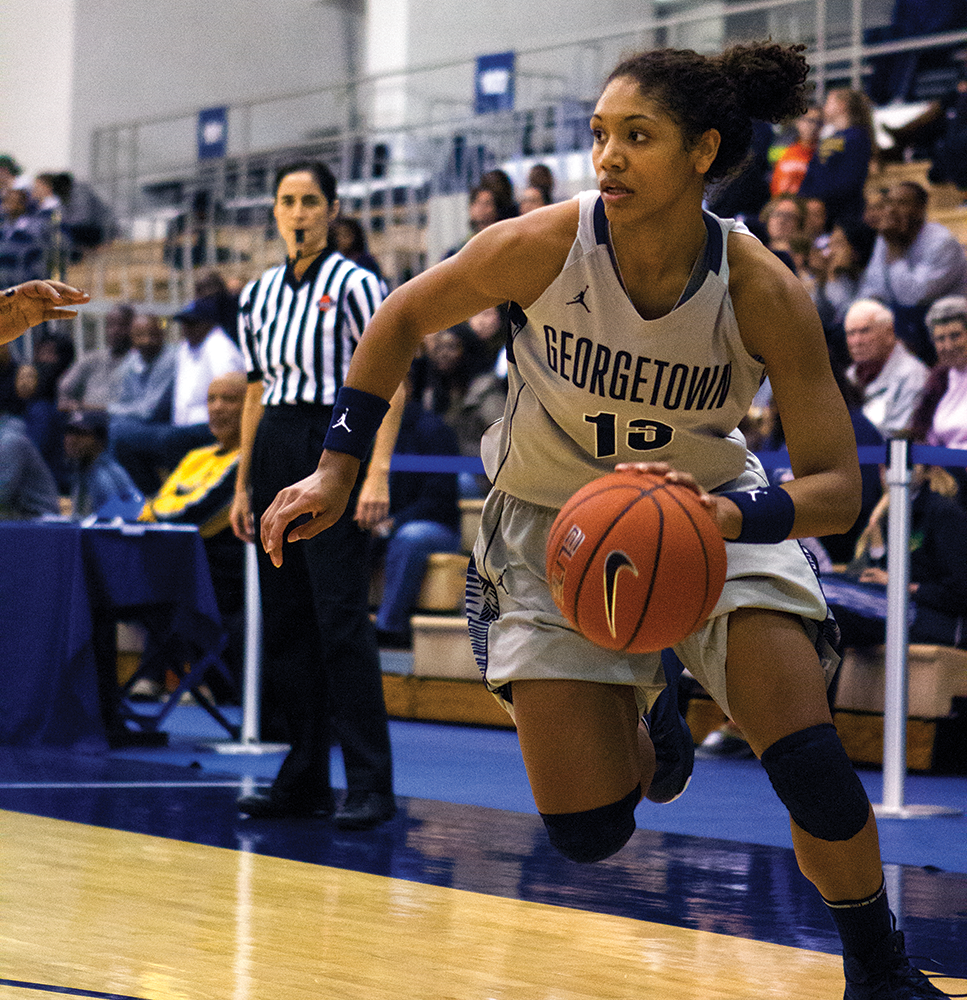 The 2013-2014 season began ominously for the Hoyas, after former Head Coach Keith Brown resigned in October 2013 after he was placed on paid leave amid allegations of verbal abuse.

The subsequent hiring of interim Head Coach Jim Lewis made for a rocky start to last year’s campaign. The team already faced an uphill battle in the task to replace the nearly 23 points and seven rebounds per game of graduated Georgetown women’s all-time leading scorer Sugar Rodgers.

On top of that, the Hoyas had to transition into the new-look Big East conference. Clearly, it was to be a year of change on the Hilltop.

After a streak of five straight seasons finishing with a winning record and three straight qualifying for the NCAA tournament, last year marked the second season in a row that the Blue and Gray failed to do either.

The Hoyas sputtered to an 11-21 season, and only managed a 4-14 record in Big East, good for eighth place in the 10-team conference. Following a dominant 56-37 win against ninth-seeded Xavier in the first round of the Big East tournament, the Hoyas lost to eventual champion DePaul 78-54. With the loss, Georgetown was eliminated from postseason contention.

“It’s been hard. We’ve struggled with switching coaches a lot and trying to adapt to new plays and the different teams that are coming in, so it was hard not being able to make it where we wanted to,” junior forward Logan Battle said of the team’s disappointing form in two consecutive seasons.

Despite the Hoyas’ struggles, the team demonstrated tremendous growth. Then-freshmen guards Tyshell King and Jade Martin, forward Faith Woodard and center Natalie Butler brought youth and energy to a team with only two seniors, forward Andrea White and guard Samisha Powell. Woodard had a successful season, averaging 10.2 points per game and 4.3 rebounds per game. For her efforts she was named to the Big East all-Freshman Team and the Big East all-Academic Team.

“I couldn’t have done it by myself,” Woodard said. “I had my teammates helping me, and my coaches and the coaching staff believing in me, so it was definitely a team effort.”

Meanwhile, Butler headlined the freshman class. The standout center dominated both ends of the floor, averaging a double-double with nearly 14 points and over 13 rebounds per game. She was unanimously named Big East Freshman of the Year in addition to being named to the all-Big East Second Team.

Despite the preseason mired by controversy, the Hoyas got off to a strong start, winning six of their first 10 games including the championship in the Great Alaska Shootout. Considering two of their first four losses were against top-10 teams, the Hoyas appeared poised to have a successful season under the guidance of Lewis. Following a loss against No. 10 California, Georgetown went on to win five of its next six games, including a statement win against D.C. rival George Washington University 78-57. In this game, the Hoyas showed their potential, dominating on both ends of the floor as five players scored in double figures.

However, after the 6-4 start the season would soon slip away from the Blue and Gray, as they dropped 17 out of their remaining 22 games.

“We started off really well, just trying to pull ourselves together with a lot of things that happened, but a lot of things continued to occur,” said current team co-captain and junior guard Katie McCormick of the Hoyas’ fall.

In the midst of a six-game losing streak, the Hoyas had a stretch where they lost three close games in a row in overtime by six total points against Florida, Creighton and Marquette, respectively. Georgetown would finally notch its first conference win 85-79 against newcomer Butler, coming back from a 19-point deficit. White and Natalie Butler dominated inside and each posted a double-double, as White scored a game-high 25 points and grabbed 10 rebounds, while Natalie Butler totalled 15 points and 15 rebounds.

This proved to be a theme throughout the season. When both White and Butler dominated, the team won.

After the Butler win, the Hoyas lost seven in a row before eventually winning 66-58 against Xavier at home. Again, White and Butler led the team, with White tallying 25 points and 14 rebounds and Butler notching 16 points and pulling down 17 rebounds.

Midway through the season, the Blue and Gray recorded their best win of the season, a 60-57 upset at home against No. 22 St. John’s. Powell, then-sophomore forward Logan Battle and Woodard led the team in scoring with 13, 12 and 12 points, respectively. Meanwhile, White and Butler once again controlled the glass, grabbing 10 and 14 rebounds, respectively. The Hoyas were boosted by a large number of contributors on offense instead of relying on the dynamic Butler-White duo.

In the second to last game of the Big East regular season, Georgetown won 71-65 against Providence, providing itself with momentum entering the conference tournament, despite a defeat at conference-winner DePaul the next game. Once more, the White-Butler tandem controlled the paint, and therefore the game, each recording a points-rebounding double-double: 17 and 10 for White and 10 and 20 for Butler.

After a loss against DePaul in the season finale, the Hoyas turned their attention to In a display of yet more post domination, Woodard and Battle each scored 13 points, and Butler notched yet another double-double with 11 points and 13 rebounds, as the Hoyas cruised to a 56-37 win over Xavier.

A close game at half, Georgetown blew the game open scoring eight unanswered points to start the second half as part of a 21-3 run to take a commanding lead and shut down Xavier for the rest of the game.

After an impressive win in the opening round, the Hoyas had a monumental task at hand: defeating the DePaul Blue Demons, a team that had beaten Georgetown by an average of 20 points in two regular-season games. The Hoyas’ season ended with the 78-54 loss, a game in which Logan Battle scored 20 points and grabbed six boards for the Blue and Gray, while Butler managed to tally yet another double-digit rebounding game with 11. However, the Blue Demons were able to capitalize on the Hoyas’ mistakes, scoring 33 points off of 28 Georgetown turnovers.

With a season of loss, change and injury wrapping up, seniors Andrea White and Samisha Powell performed well in their swan songs and rallied the Hoya fans, as they both posted impressive lines, with White averaging 15.2 points and nine rebounds a game and Powell leading the team in assists. Of course, Butler was the standout of the disappointing season, so much so that rumors of her transferring to national powerhouse Connecticut began to buzz around the area.

And indeed she did transfer, following highly regarded recruit Shayla Cooper, who had transferred during the season. Cooper, who was named the Big East Preseason Player of the Year, only played in two games, but averaged 16 points per game in her limited minutes and decided to depart the Hilltop for Ohio State. The graduations of Powell and White, coupled with the transfers of Cooper and Butler provided an unsettling end to the year. Despite this, the team remains hopeful for 2014-2015.

“This season, the sky’s the limit,” McCormick said.

For a senior-less team looking to implement the playing style of a new coach while searching for on-court leadership after several key departures, the Hoyas certainly have their work cut out for them. However, the feeling around the program is one of confidence and anxiousness to start the season and rid themselves of the demons of last year. With a new, promising coach in Natasha Adair and an exciting five-player freshman class, Georgetown may be closer than many think to returning to its former glory.