Imagine a place torn apart by sectarian violence, facing regime changes all the time, desperate for peace and facing crushing poverty due to the turmoil. Its natural resources are exploited in a clandestine manner in order to finance war operations, and the hopes and dreams of its citizens have been rendered futile as it attempts to assert a semblance of stability.
Sound familiar?

Except this isn’t Iraq or Syria — it’s the Central African Republic, a conflict-plagued, landlocked nation that has not had much to cheer about since long before its colonial past. And at the moment, it’s the most ignored place on Earth.

In the past decade or so, the CAR has endured through the rule of an incompetent and corrupt ruler, who was overthrown by a Muslim minority coalition called the Seleka. The Seleka merely commenced the same hostilities and conducted massive human rights violations, including indiscriminate torture, rape and murder of innocent civilians. Child soldiers, inspired by the tactics used by Ugandan Lord’s Resistance Army leader Joseph Kony, assumed a fixture during and after the violent coup.

This spawned a fresh campaign of revenge from a Christian group called the Anti-Balaka (anti-machete), which responded with the same atrocities, and forced the Seleka leader, Djotodia, from power in December 2013. The aftermath of the swift power changes has resulted in more than 5,000 deaths since December, with a quarter of the nation’s nearly 5 million people displaced.

And the Muslim minority population remains heavily targeted, causing them to leave their homes and seek shelter elsewhere, with only one Muslim-inhabited district left in the capital city of Bangui. The Anti-Balaka have been accused of moving toward an ethnic cleansing of Muslims.

Despite the severe lack of control over the state by its institutions, the international community’s help has been quite limited. The United Nations recently took over peacekeeping operations, and yet the force supplied is not nearly what is necessary to stabilize the country. Aid is not substantial enough to sustain infrastructure development that has been torn apart because of the cycle of bloody fighting, leading Steven McDonald, an expert in central Africa from the Woodrow Wilson Center to call the CAR a place that “the world has ignored for two years.”

And this is truly a travesty, because the CAR has tons of potential. Even the most pragmatic observer would acknowledge that, notwithstanding the gross human rights violations that have already occurred, the CAR is home to significant reserves of timber, diamonds, uranium, gold and crude oil. These resources remain either untapped or are exported illegally to finance war operations.

Given that the CAR is one of the 10 poorest nations on the planet, there is ample opportunity to create opportunities for legitimate trade, employment and growth. But at the moment, the country is moving backward, with a double-digit gross domestic product contraction rate and growing unemployment.

The marginalization of the Muslim minority population is a recipe that contains all the necessary ingredients for a move toward extremism. People are desperate simply to survive, and with a lack of help from the international community, extremism becomes an attractive alternative. Al-Qaida has called for targeting of Muslims in the CAR to stop, prescribing jihad to stem the persecution.

Neighboring countries have already witnessed the rise of militant action — for example, Boko Haram in Nigeria — and the main driver appears to be economic need. In a country that ranks near the bottom for economic opportunity, and likely near the bottom for basic quality of daily life, the danger of extremism cannot be overlooked.

An end to this cycle of retribution and retaliation, however, is entirely achievable. Strong leadership, as asserted by the United Kingdom in the case of Sierra Leone, stabilized the root foundations of its system after a devastating civil war that featured many of these same features.

There is definitely a path to making this a success story in a continent that desperately needs more success and also a likely scenario in which the cycle of death continues, with potentially more dangerous overtones as frustration builds to a breaking point.

We can help avoid the latter by at least talking about it. 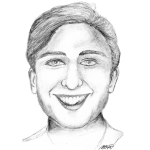 Parth Shah is a junior in the College. Politics of Parth appears every other Tuesday.