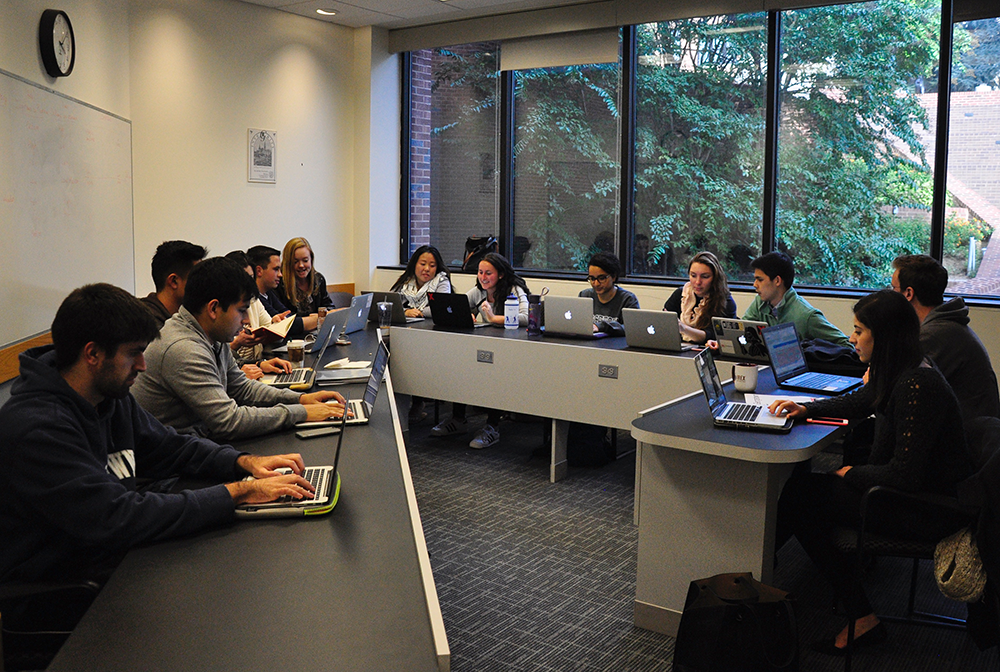 TEDx Georgetown will return in its fifth iteration Saturday with 12 speeches centered on the theme of “Risk Takers,” featuring more interactive programming, a larger board and a new marketing campaign.

This year’s speeches will discuss the role of risk-taking in the speakers’ experiences of achievement, failure or inspiration. The event is divided into three separate subthemes: “Inspiring the Uninspired,” “Fail Forward” and “High-Risk, High-Reward.”

Caroline James (COL ’16), one of the student speakers, will share a story of her experiences of participating in civil disobedience, including her arrest at a protest. On campus, James serves as the Georgetown University Student Association secretary of sustainability and is a member of GU Fossil Free.

“If I can take the risk to get arrested, anyone can take the risk,” James said. “A lot of [my speech] is about the way that civil disobedience and aspects of this risk-taking are ways to participate in the democratic process. I want people to come away with the sense of what their various passions mean to them and really just how movements work.”

Darius Baxter (COL ’15), an alumnus speaker, will integrate his personal narrative into his talk.

“I plan to inspire the crowd by sharing little bits of my life story and weaving those stories together in order to hopefully bring people a little bit of happiness,” Baxter said.

This year’s event will also see increased dialogue between attendees and speakers with breakout sessions, replacing the question-and-answer format used in previous years.

According to TEDx Georgetown Co-Chair Mona Hussein (COL ’16), students will be able to reflect on the speeches more directly with the speakers during the breakout sessions.

“It was really a way for us to include people’s stories in a different kind of way and mend them into a story that people can take back home with them and think, ‘This is something that I will probably think about in the next few months’ or ‘This could be me,’” Hussein said.

The TEDx Georgetown board tripled in size to 18 members from six last year. According to Hussein, she and Co-Chair Kevin Carter (SFS ’16) wanted to consider a wider diversity of experiences by creating a larger board, which organizes all aspects of the event from logistics to selecting speakers.

“We not only focused on having a list of student speakers and outside speakers, but we also focused on the whole TEDx experience for the Georgetown community, for students, for faculty,” Hussein said.

Although the group began brainstorming for the event in April with the selection of the theme and board members, Carter said that the bulk of the preparation occurred at the beginning of the academic year.

“When everyone came back the first week of school, we really hit the ground running. We saw a lot of enthusiasm,” Carter said.

TEDx Georgetown Marketing Director Randy Puno (COL ’16) said that this year’s board focused on engaging and interacting with students.

Puno also cited this year’s marketing campaign, which was created by Director of Social Media Marketing David Kang (MSB ’18), as a new innovative way to engage the entire student body prior to the event.

The team placed stickers in the shape of an “X” across campus. Students who post a photo of a sticker on social media will receive VIP tickets and free TEDx apparel.

“It’s going to give people a chance to interact with the theme and become a part of the process,” Puno said. “It’s more than just a day conference with speakers, it’s more of a way for people to engage themselves.”

This year, the TEDx team also coordinated meetings between student speakers to go over their talks prior to the event. Speakers also met with assigned faculty to receive guidance.

“One of the most fun things has been that the different speakers are working on our speeches together, which I didn’t expect,” James said. “We’ve also been working with professors and the department of art and art history to work on presentation as well as the content of our speech.”

James praised the team’s help in providing training for speakers.

Hussein said that the speeches will provide attendees with new perspectives on its speakers, particularly those from the Georgetown community.

“It’s a way for you to learn something new about your faculty or even outside speakers or even the speakers around you who you wouldn’t otherwise hear, whether in a classroom or something else,” Hussein said.

Puno also agreed that TEDx is a worthwhile experience for students, as it is representative of Georgetown’s academic spirit and Jesuit values.

“It’s such a uniquely Georgetown experience to be able to sit down and put all this cura personalis contemplation in action,” Puno said. “To be there for one day and absorb all these different stories and think about what they mean and then be inspired to do something about them, I think it speaks a lot to what we value as a school.”