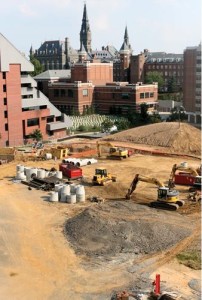 Image Contributor
Construction for the new science center was planned to begin in 2008, but has recently been stalled due to the recession.

As [the Hariri Building officially opens its doors this semester as the new home of the McDonough School of Business](https://www.thehoya.com/news/inside-the-new-msb-building/), the lot beside it remains, quite simply, a pile of dirt.

According to the original plan announced by university officials in May 2007, this was not supposed to be the case. Preliminary funding for the construction of a new 150,000 square-foot science center – the centerpiece of a plan to enhance and expand the sciences at Georgetown – adjacent to the Hariri Building was approved in May 2007, and officials said construction would begin in 2008.

[The onset of the recession in 2008 brought all awaiting university capital projects to a halt](https://www.thehoya.com/news/degioia-outlines-new-financial-plan/), as the university was unable to borrow more money in the midst of a recession. As the new academic year begins, construction of the new science center remains on hold, according to University Provost James O’Donnell, while several science professors continue to complain of inadequate space in the Reiss Science Building and an inability to expand science faculty given the space constraints.

The facility will require $100 million to build in addition to operating costs, O’Donnell said, but so far the university has raised only $25 million for the project. He said Georgetown will need to be able to “raise, borrow or save” the full $100 million over the course of the construction period.

O’Donnell said he is uncertain when Georgetown will be able to begin construction, noting that the date will depend on both the economy and the evolving campus financial plan. He added that it was possible that construction will begin this academic year.

Despite the delay, O’Donnell said building the science center remains a top priority. O’Donnell pointed out that preliminary infrastructural work at the site has begun.

“I think it’s fair to say that we wouldn’t be doing infrastructure work and clearing the space if we didn’t intend to build [the science center],” he said.

Building a new, central facility remains only one piece of the puzzle in expanding the sciences at Georgetown. Increasing faculty size and launching new programs are two other key components; but, according to Paul Roepe, chair of the chemistry department, much of the university’s ability to successfully meet these goals hinges on the completion of a top-notch facility and expanding classroom, lab and office space.

The center is only part of the broader sciences expansion plan. Although it will be a substantially upgraded facility, the new science center will not significantly increase total space available for the science departments, because, after completion, the university plans to close down Reiss Science building for a renovation. A final element of the construction plan calls for the two facilities to be linked by a bridge over Tondorf Road.

Roepe said that, despite financial challenges, the time is now for growing the sciences at Georgetown.

“It is not until [the Reiss Science Center] renovation is underway that we can begin to meaningfully recruit additional top-flight faculty to the sciences at Georgetown, because only then will we have more space to offer them,” Roepe said. “Timing is everything for us. We’ve recruited a lot of outstanding, young faculty in past years, but now we need to increase faculty size and we cannot do that until we have more space.”

akarand Paranjape, an associate professor of physics and the co-director of graduate studies in physics, emphasized that he does not think science facilities are adequate even for the current faculty at Georgetown.

“Lab facilities are marginal, primarily due to building age – leaks in water pipes, lack of humidity and temperature control and the overall shortage of space,” he said.

Roepe highlighted another institutional challenge requiring faculty recruitment: Georgetown is currently unable to further spread out science faculty if the science requirements in the university curriculum are expanded.

Roepe said that Georgetown continues to make efforts to enhance science facilities, including building new organic chemistry labs in the Basic Science Building at the Medical Center last year and renovating freshman labs in White-Gravenor Hall this summer. Roepe noted that the university retains advantages in recruiting and attracting talent, including its location in Washington, D.C., and its proximity to the National Institutes of Health. But for Roepe, getting the science center underway and expanding space remains essential.

Ronda Rolfes, associate professor of biology and a member of the university’s science planning committee, said that the biology department has made efforts to expand its offerings, introducing new majors in neurobiology, the biology of global health and environmental biology. But the space crunch makes growing their faculty-from 17, the current number, to the target size of 25 to 26 professors-unlikely until facility expansion is completed.

“Honestly, we do not have the space to grow to [25 to 26 faculty members] until both the new building and Reiss renovations are complete,” Rolfes said.

While Rolfes said it may be possible to “compress” lab and office space further to make space for a few additional faculty, she said “compression as a strategy would only work for the short term and is likely to be viewed as a negative by future faculty candidates.”

“We have been told that new faculty hires will come, but right now, we can’t even offer them an office or lab space,” Paranjape said. “Would any applicants [or] recruits choose to come here?”