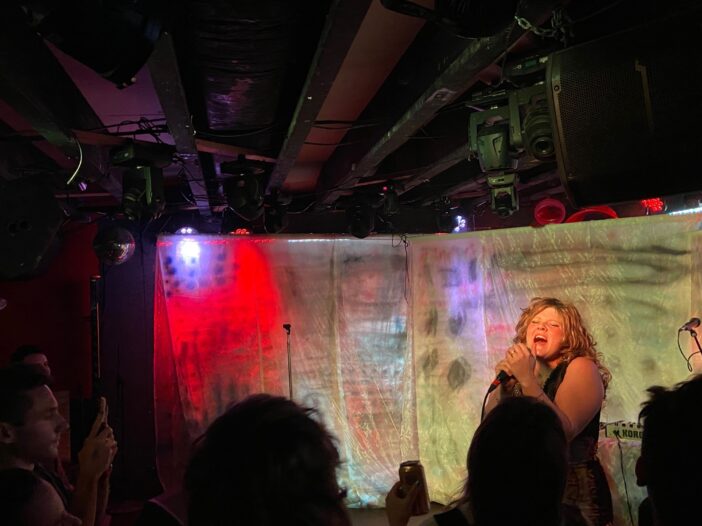 Grace Ives is expanding, and she’s built to last.

On the third night of her Janky Star tour, Ives lit up a late night show at DC9 Nightclub on Sept. 10. The Brooklyn-based musician started up her first headlining tour Sept. 8, and has dates throughout the United States during the month of September. Ives toured in support of her sophomore “Janky Star,” released in 2022.

The mid-twenties pop phenomenon had her first EP release nearly six years ago with “Really Hot,” which featured a set of whimsical and quirky indie pop tracks. Her early work foreshadowed this most recent boom of “bedroom pop,” an indie genre pioneered by memorable artists like Clairo and beabadoobee.

Ives’s 2019 self-produced first full-length album “2nd” shied away from her lo-fi bedroom pop-esque portfolio. Her playful synth work and simple vocals toy with restlessness, peculiarity and saliency: all of her songs are under three minutes long, making her first album just over 20 minutes and leaving the listener wanting more.

Though it seemed impossible for Ives to produce an album that is even easier to dance to than her last, three years later, she proved her strength as an artist once again. She marked her return with her “Janky Star,” providing a much more mature sound of sophisticated synth pop. “Janky Star” fully displays Ives’ mastery of her own art and is a more versatile, elegant and intimate piece of the music she has been crafting since her bedroom days six years ago.

The concert opened with Brooklyn-based sibling hyperpop duo Frost Children, who donned crushed velvet fur capes and used lightsabers, among other props. With eerie pop punk and unrelenting volume, the duo captured the audience’s attention. The performance was a family affair, as onstage appearances by the duo’s parents and younger brother incited an almost tangible glee from the crowd. Their stage time may have been as mesmerizing as it was haunting, but however it felt, Frost Children’s whimsy had DC9 furiously dancing.

The clock nearly struck midnight when Grace Ives sauntered onto the stage, and after some minor sound equipment malfunctions, Ives led us straight into a dream-like state with “Janky Star” opener “Isn’t It Lovely.”

Ives has always championed the minimal, evidenced in her characteristically short songs and simple, sweet Roland MC-505 digital beats. As the only person on stage, Ives stood to prove herself as the master of her own craft — all she needed was herself and her turntable.

“Janky Star” was born as an independent project, and Ives only collaborated with acclaimed producer Justin Raisen two years after she began making demos. Nevertheless, with the modest backdrop of a spray-painted sheet, Ives dazzled with her stylish sound, reverberating vocals and graceful dance moves.

Much of Ives’s set was limited to her new releases on “Janky Star,” but she made space for a few of her funky fan favorites like “Mansion” and “Mirror,” all of which received boisterous and enthusiastic audience responses. Crammed onto the floor of DC9, her crowd was a sea of cheers and a celebration of her work, past and present.

Lately, synth usage in pop has toed the line between danceable and ambient “chill,” and Ives showed her range in providing both, trading pop bangers for slow ballads throughout the night. The show was much like “Janky Star” itself: disjointed, moving and a natural delight. Ives makes performing look easy — with disco ball reflections glittering around her, Ives’ avant-garde pop had DC9 spellbound.

“It’s good to care a lot about things,” Ives said while introducing “Icing on the Cake,” a song off “2nd” that rhythmically laments a classic lovers’ quarrel. Nearing 1 a.m., Ives let her guard down through her music and engaged in a casual, vulnerable conversation, bringing the audience along for a bout of late-night introspection littered with astrology references. She filled the room with tenderness, taking small breaks between songs for light-hearted chatter and giggles, and remained relatable to her loyal audience of hipster 20-year-olds.

My night at DC9 was a perfect summation of Ives’ musical journey: intimate, independent and impossibly fun. Ives doesn’t boast theatrics or aesthetics of modern bedroom pop — baring her soul and effortlessly infectious sound on stage for just under an hour, she remains enthralling, eclectic and the grooviest face of new wave experimental pop.