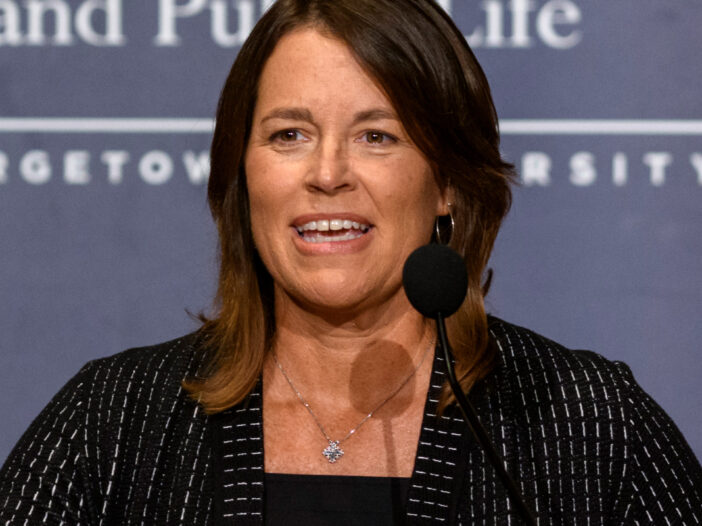 Kim Daniels, an advisor to the Vatican and Catholic church officials, will be the new director of Georgetown University’s Initiative on Catholic Social Thought and Public Life.

Daniels, who previously served as the initiative’s co-director, replaced John Carr, the initiative’s founding director, on Jan. 1. The initiative aims to promote dialogue at the intersection of faith and politics and to encourage students to see their faith and Catholic social teaching as important parts of their lives.

Since its founding in 2013, the initiative has hosted 145 speaker events featuring religious and political leaders, journalists and academics.

As director, Daniels said she hopes to focus on Washington, D.C. youth and their exploration of faith while connecting the values of the institute to greater world developments such as the conflict in Ukraine, racial justice and Pope Francis’ focus on solidarity with vulnerable populations.

“I’m excited to strengthen and broaden the Initiative’s efforts to bring principles of Catholic social teaching, such as our commitment to seeking justice and advancing the common good, to national and global conversations,” Daniels wrote to The Hoya.

In particular, Daniels said she intends to uplift the voices of young Latinx Catholics and women on Georgetown’s campus.

“As director I also hope to expand our efforts to bring together young Catholics in Washington to explore links between their faith, Catholic social thought, and their lives and work, and to help raise up the voices of young Latino Catholics as well,” Daniels wrote. “One of my central goals as Director is to raise up the leadership of women and to reflect the diversity of Georgetown, our country, and our global Church in all that the Initiative does.”

Daniels has worked with the initiative since its 2013 foundation, serving as its associate director from 2018 to 2020 and co-director from 2021 to 2022. Additionally, Daniels served as a lead adviser to the Vatican, U.S. bishops and Catholic organizations on issues intersecting with Church teachings and public life and as an adjunct professor in Georgetown’s department of theology and religious studies.

Daniels said she aims to attract more students to the initiative’s events.

“In the coming years our team will focus on more fully engaging Georgetown students and the broader Georgetown community in our efforts to bring Catholic social thought and the Jesuit tradition to current questions at the intersection of faith and public life,” Daniels wrote.

“I know that she is committed to building bridges across political, religious and ideological lines which is critical to civil dialogue. I also know that she will lead by lifting up the voices of other women and lay leaders,” Mazyck wrote in an email to The Hoya. “I know that with her leadership, the Initiative will continue to promote the common good especially in critical conversations impacting our country and our world.”

Carr founded the initiative in 2013 after university President John J. DeGioia (CAS ’86, GRD ’03) reached out to him about the opportunity, and said that despite initial doubts, the initiative has seen remarkable success over the past decade, with thousands of students showing up for dialogues.

“There is a hunger on campus and beyond for the moral vocabulary of Catholic social teaching,” Carr told The Hoya. “In a divided time, in the church, in Washington, there is a real desire for civil dialogue that is principled around fundamental ideas.”

“The Initiative has become a preeminent place of dialogue and leadership at the intersection of faith and public life and a powerful example of Georgetown’s Catholic and Jesuit mission in action,” DeGioia wrote in a press release from the university. “The Initiative’s mission and progress are more important than ever here at Georgetown, in Washington, and for our Church and nation.”

Carr said he looks forward to the initiative continuing to serve as a facilitator of peaceful discussions on social issues in the church and public life under Daniels.

“Georgetown is the right place and it is the right time to promote civil dialogue and to lift up basic principles of human dignity and solidarity,” Carr said.